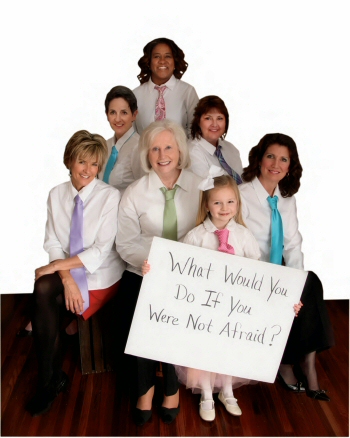 What would you do if you were not afraid?

Go to WLM’s FB page or www.wilsonlivingmagazine.com to watch a video of the cover shoot.

That’s the question that has run rampant on the internet since Sheryl Sandberg, COO of Facebook, gave a commencement speech to gradutes of Barnard College, asking them that question. Her hope was to inspire them to face their fears, not hold back and do whatever they wanted in life.

The question seems easy enough but not many have the guts or stamina to follow through with the answer. Those that do however, reap the biggest rewards, even those that fail at first.

March is Women’s History Month, a month to pay tribute to the women who have not only contributed to the events in history and society but also a time to honor those women who are paving the way for the younger generation.

To many women in their 20’s, 30’s and 40’s, women in leadership roles in business, industry and politics seems natural but less than 100 years ago women didn’t even have the right to vote. Equally as astounding is the fact that almost 100 years after women received the right to vote, we still have never had a female President.

But progress comes in steps and WLM is proud to honor our local leaders in government both in the public eye and behind the public eye, who are stepping up and taking a seat at the table. These women are working hard each day to make life better not just for other women but for the communities that they live in. They have faced their fears and conquered them all!

Susan Lynn – Mt. Juliet Republican House member Tennessee General AssemblyWhen did you first get interested in politics and why?

Growing up my parents were active in our county Republican Party, and my mother was a leader in the county Republican Woman›s group. We often had meetings at our house, and my mother brought my sister and me along to the local headquarters. As I grew, my parents always advised “never stop paying attention,” adding that it is always prudent to have a healthy skepticism of our government leaders.

When we moved to Mt. Juliet in 1997, I became involved with the local Republican club. For several years, we battled the threat of a state income tax together. To my great surprise, my friends drafted me to run for state representative in 2002 and “We” won by receiving over 50 percent of the vote.

Let me first explain that I am a born again Christian so for me my public service is my mission field. Professionally, I feel I have several roles as an elected official – duties actually. My first duty is to guard, protect and defend the Constitution. I have a duty to be of service to each person I represent by providing excellent constituent services. I also have a duty to study the bills and issues tirelessly so that when I vote on their behalf, they may trust that I have sought to be informed.

What advise would you offer other women considering running for office?

As Jackie Kennedy said, “If you bungle raising your children, I don’t think whatever else you do matters very much.” Life has many seasons, make sure you are in the right season of life should you ever run. In other words, we can have it all – just not all at the same time.

I am a fiscal conservative and have tried to apply this philosophy as I work with the City of Lebanon on a dayto-day basis. I served as the President of the Republican Women for years and actively became involved to promote those, who like I, believe the private sector plays a huge role when it comes to how a city develops and its prosperity.

I believe that my job is, and has always been, to understand that I am responsible for how we spend other people’s money – meaning “YOUR” Money.

What advice would you offer other women considering running for office?

My philosophy is to be true to what you believe in and vote accordingly, overlook the criticism that you may experience for voting your values and stand tall. I believe and have confirmed women are uniquely prepared to govern and work together and call it like it is when needed. We should get out as women, moms and young ladies and make a difference. You go girls!

Just a word of guidance, ladies: you need to make sure your partners and families are “all in” because in your capacity as a public servant, it can be very demanding, but also a rewarding job.

While in Leadership Wilson, I learned a lot about how our community operated and felt I could help make a difference. I believed in the idea of more women in government, more women representing our citizens, more women with a voice and a fresh perspective.

First, to serve my constitutes of the 20th District and Wilson County, not just the East, West, North or South of Wilson County, but the whole entire County. As the county’s legislative body our primary role serves as the policy making body for the county. Our job as a commissioner is to appropriate funds for each department. As a County Commissioners we do not regulate the sheriff’s office, school system, Road Commission or W.E.M.A. We merely deal with their budgets. All fee offices are regulated by that elected official, not the commission.

What advice would you offer other women considering running for office?

Running for office is a big decision, a huge decision, that means painstaking campaign efforts and a jolting shove into the spotlight, but it’s an opportunity to obtain a platform from which to represent the needs of fellow women. I personally know that to run for local office, you serve as a public servant and not everyone will agree with you, so believe in yourself. As the first African-American female elected to both the Lebanon City Council and Wilson County Commission, I learned to be resilient and stringent, as well as compassionate about the convictions in which I believe. I felt it puts me closer to the community that I serve

Dad was a World War II veteran who preached the value of voting and involvement. I have always felt I owed it to my country to participate. More than anyone, my mother taught me to stand up for things I believe in and to fight for things that just aren’t right.

What do you feel your role is as a political consultant/adviser?

Elections are about choices. Voters want to know where a candidate stands and how that differs from the other. From energy to land use issues to trade and defense, I look at what candidates and incumbents have said or how they have acted on a myriad issues and distill those differences. My job is to locate, dissect and thoroughly analyze the most accurate information so I can provide a true picture – the good, the bad and the ugly. That’s the only way a client can really know her strengths and weaknesses, or that of her opposition.

What advise would you offer women considering running for office or becoming involved “behind the scenes” in politics?

In the consulting world, the glass ceiling days are long gone. I can remember being the only female in the room, but it has been a very long time.

My advice: Don’t stand back and wonder how to get to that place. Stand up and take your place. Don’t think for a moment that you can’t, because you certainly can

After two million dollars went missing in the school system in our county, my husband and I were upset. My husband came home one day very upset over the situation and said one of us had to run for county commission and he didn’t have the time. I was a mother, housewife, court reporter and going to school at night. He was working 50 to 60 hours a week at his job. I decided I would be the one and my husband went door to door after work and got me elected to the county commission. I promised to pass a financial accountability act for Wilson County. I was the most unlikely person to ever hold political office since I was voted “Most Bashful” in my Senior Class. After getting a financial management act passed and getting the county on computers for the first time and hiring a CPA, a new house district was drawn in Wilson County. I ran and lost by 270 votes. Some folks persuaded me to run again in 1994 and I won. I served eight years in the house, fought back a state income tax, and the party persuaded me to run for Senate.

To represent my constituents to the best of my ability, keep government accountable, taxes low, and work to make sure we keep the freedom and liberties our Founding Fathers fought for so long ago.

What advise would you offer other women considering running for office?

Be yourself, stick to your principles and stand up for what you believe even if you are the only one standing.

We just had our first grandchild and while holding him I wondered what kind of world will he grow up in? So I put it to prayer and answered the call to run my first race in 2006. Campaigning was the hardest thing I had ever ever done. Knocking on every door, going to every community event became my mission so that I could know the heartbeat of the people and the issues that concerned them. It took a whole lot of prayer and another race before being elected as the first female republican state house rep in district 40 in 2008.

My role as an elected official is to serve and to work hard for all those whom I represent. My role is about being “salt and light,” serving honestly, with integrity and keeping the Main thing the Main thing as a wife, mother and a grandmother.

What advise would you give other women considering running for office?

Well do not underestimate yourself. When you are called to a task, think it through and ask yourself is this something I believe in and truly care about? If so then dive in with all your might never flinching on your principles and courage to do the right thing. I will never forget the first time after being elected how moving it was to see “Weaver” on the voting board in the House Chambers. It was humbling then and it still effects me the same today after serving almost three terms. Keeping that perspective will never allow one to become callused and forget those who brought you to the dance to begin with.