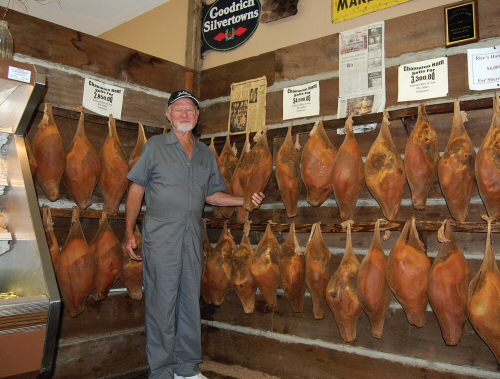 Near the heart of the burgeoning community of Mt. Juliet, there remains one small spot by the side of Lebanon Road that never changes: Rice’s Country Hams. Connoisseurs of salt-cured ham continue their steadfast prayers that it never does.

A few words on the side of the building salivates volumes: “Smokehouse of champions,” Edward Rice & Sons. This third-generation family-run business remains ensconced in a white frame building with a silver tin roof that began life as a country store in 1886. Walk inside the front door and just after you hear the bell jingle above your head, your eyes will alight on an array of colorful country hams hanging on the sides of the walls while a second later the wonderful aroma of salt-cured ham assaults your nostrils.

Ed Rice Jr. and his family make their country hams the old-fashioned way, and that means one thing. You got to take your time. You can’t get in a hurry. You have to slow-ww-w down. That philosophy fl ies in the face of a busy world, but these ham makers have got it right. “We began selling our cured hams in 1955,” said Rice. “My dad had run a country grocery store in this building. The reason my dad got out of the country store business, he said the faster the automobiles ran, the slower the country grocery business got. People drove right by us to the Piggly Wigglys and other chain stores.

“Where our store was was on the main route from the East Coast to the West Coast. There was no interstate then, Nowadays he plays golf and Lester Flatt, Charlie Daniel, Dinah Shore, Phil Harris and Ronald Reagan, and the shop was featured nationally on The Martha Stewart Show in 2001.

Very likely Mt. Juliet’s oldest business, Rice’s Country Hams are sold from a store that Horace Alexander built in 1886. Ed Jr.’s great-grandfather W.T. Hunter purchased the store in 1910 and operated it with his son Ed from 1910 to 1935. In 1935, Ed’s father Edward Rice bought it and began curing hams in 1953. Ed Rice Jr. relates that the store originally sat on the opposite of Lebanon Road.

“Around 1930 or so, they were gonna widen Lebanon Road. My great-grandfather didn’t want them to take his front porch, so the only alternative was to move it across Lebanon road. He jacked it up and put it on logs and hooked his mules to his store and pulled it across the road to its present position. He did not turn it around. He pulled it straight across.

“So what used to be the back door of the store is now the front door. Since they have widened the highway, a lot of our customers park in back and come in the back door, so we just about have our business coming in the front door again,” he says.

The store’s wooden floors hunters mosey about and poke around the shop that oozes with ambiance. Decorating the walls are artifacts that reflect a country lifestyle from Tobacco thermometer and a big red and white Coca-Cola cooler will nudge the memory banks of baby boomers who remember the old-timey country stores that began vanishing in the 1960s. Photographs and newspaper clippings on the wall relay the fact that this family business has been in it for the long haul. And a passel of trophies, plaques and ribbons won at state and country fairs testify to the quality of Rice’s Hams.

About a hundred yards behind the shop, across a ditch via a concrete foot bridge, awaits the white block smokehouse that Ed Rice Sr. built in 1959. Before that an old milk trailer served as the original smokehouse.

The smokehouse is where the action takes place, but slowly, very, very slowly.

In mid-summer is when hams really gain their flavor,” said Rice. “If it’s 90 degrees outside, then in the top of the smokehouse it’s right at close to 100 degrees, and the grease will be dripping out of the hams and hitting the floor and sound like it’s raining.”

In late September about 4,500 hams hang in the smokehouse, just about ready to make the short trip into the shop. “We do ’em the old-fashioned way, a true  10-month cure,” said Dabbs. “The hams we put in the first week of January and start taking them down in October.

“I started helping Ed 18 years ago and have been doing all the curing the last eight years. It took all 10 years to learn, but it’s his knowledge and his daddy’s knowledge. Dealing with Mother Nature every year is different. You don’t control the environment. Moisture is the enemy to country ham,” said Dabbs, whose with Mother Nature, Father Time, and years of experience.

Ed Rice keeps few secrets as he knows you don't learn to cure hams from a book or by following a recipe.

“I can write down how to cure country hams, but you can’t do it. It’s really the small things you do daily. Basically they hang there and go through the summer sweat, losing weight and gaining flavor. The more weight they lose, the better flavor they get. Our hams will lose about a third of their original weight. That natural aging that Mother Nature and Father Time brings to ’em is what creates that wonderful flavor that you do not get in a grocery-store ham or a quick-cured ham. My dad before he died said he thought we were about to get the hang of it.”

The Rice ham that took home the 2008 blue ribbon at the Wilson County Fair was donated to Sherry’s Run and brought $4,000 at auction last year, while their ham from the 1986 State Fair fetched $9,850. Somebody was eating high on the hog. Ed’s 10-year-old granddaughter, Brice Dabbs, won the blue ribbon at this summer’s Wilson County Fair for best country ham. “I wonder where she got that ham?” quips granddad. The “sons” of Edward Rice and Sons are Ed Jr. and his younger brother Jimmy. “When my dad retired in 1981, he turned the business over to my brother and I. We both worked at Ford Glass Plant. I worked there 31 and eight-tenths years. My brother stayed two years and decided he didn’t want to be in ham business any more, so I bought his share,” said Ed.

“We never have raised our own hogs to slaughter. We have always gone to meat packing companies. For about the past 15 years, we have bought our hams from Premium Standard Farms in Milan, Mo. “They have improved the breeding in the pork industry so much over the years. Each piece of ham you get from me has less cholesterol than a boneless chicken breast and is 98% fat free,” says Ed, who began helping his dad at the age of 15. Curing a ham the old-fashioned way is just hard work, plain and simple.

“We salt the hams down and leave them in salt, depending on their size, from 30 to 40 days,” says The Ham Man. “It takes eight pounds of salt to cure 100 pounds of fresh meat. At the end we wash and clean ’em, and that ham has absorbed all of the salt that we put on ’em. The salt goes into the meat and pushes out the moisture, and it creates a condition in which bacteria cannot exist. Then we hang the hams up in the ham house, and basically they hang there all year. We don’t move ’em from the time we get ready to sell them.”

As for the smoking process, Rice and Dabbs use hickory wood, hardwood sawdust and a little apple wood. “Spring is the only time we smoke the hams on the front end,” he said. “If it rains, we will close the ham house up and smoke them for several days. Then when it dries, we open the windows and turn the fans on and draw fresh country air through there to dry them out, so that is a variable. We can tell by looking at ’em when they need some more smoke.”

Rice turned the keys to the smokehouse over to Dabbs in 2001.

“He helped us a long time before they were married. He’s been working his way up in it and does a good job curing the hams. My daughter does a great job dealing with orders on the phone. I’m too old and am now on a need-to-know basis. When they think I need to know, they will tell me.” said Rice, who was born in a little white house about 60 yards west of the shop.

Raised in Gladeville and previously in the trucking business, Dabbs works with the hams full time now and loves his labors. “It’s the uniqueness of it all. I’m youngest person who enters the contest when I go to the state fair. Everybody else is 60 or 70 or older. I’ve taken a family tradition and kept it going. It is special and part of Mt. Juliet,” Dabbs said.

“Washing the hams and getting them hung is hard work. You gotta love it. I enjoy it but there’s nothing to enjoy when you’re lifting up 40-pound hams. I’ll touch every ham 25 times.” Rice’s Country Hams has customers who have been buying hams for more than 50 years. The ham shop is open Monday through Saturday in October, November and December, and also offers pork lovers the options of half or sliced ham, honey ham, sausage and smoked bacon.

“It’s a chore to get the store open every year,” says Ginny Dabbs, Ed’s daughter, who began working in the shop at the age of 9 or 10. “Our
customers are so grateful that we’re here. It’s hard work, but we do it for them.

“My phone rings from the minute I walk in the door until minute I leave,” said Ginny, who runs the business end of things and handles orders and shipping. She took over for her mother, Ginger Rice, about 10 years ago.

“Mama made this store what it is today. When grandmother retired, and my mom and dad took over, they only did ham. And Mama came in and brought in honey and other products. She made it a store rather than just a ham shop,” said Ginny of the place that now stocks molasses, honey, jams, Tennessee whiskey cakes, pancake and biscuit mixes and gift boxes that range from $30-$70.

“The two weeks before Christmas, I will ship out 80 to 200 boxes a day. That’s a lot of business for a business that rarely pays for advertising. We’ll sell 80% of our hams between Thanksgiving and Christmas,” she says of the hams that are priced from $40 to $60 each. “We’re here till Christmas Eve. If they come by mid-December, we’re usually in good shape but don’t delay.”

Helping Ginny in the afternoons after school is daughter Brice, a fifth grader at Elzie D. Patton Elementary School. “I put stickers on stuff,” says Brice, who labels packages and cleans up around the shop.

Her father Scott sees how busy the shop can be in the fall, but he doesn’t see many changes coming in the business nor does he plan any expansion as increasing the quantity would take away from the quality.

That decision means some folks who wait until the last minute may walk out of the shop empty handed. “We’ve turned people away,”
said Ed, “Some people come in late and say, ‘Well, I sure would like to have a ham.’ We’ve had people leave the store with money in their
hand and tears in their eyes wanting our ham.

“Right now, our smokehouse will be at 4,500 hams. They’ll all be gone at Christmas time, nothing left in that ham house but the smell and my son-inlaw and me. They will all have found a home,” says The Ham Man of Mt. Juliet.