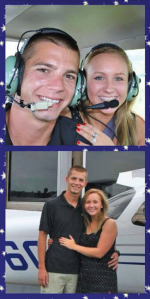 The good life starts for many on the day they find their true love. And like many things in this changing world, proposals have gone from simple occasions to spectacular, well-thought out, family affairs. This issue we gave out a Facebook challenge – in 100 words or less tell us your proposal story and we will pick our top one to feature in WLM. Problem is, we couldn’t just pick one! So we picked a few of our favorites to feature instead. Every single one touched us and we wish you all much happiness as you . . . find the good life . . . together

My fiancé’s proposal was so surprising and romantic! He told me that he committed to help his friend put up hay all day on a Saturday in August. It was the  week of the Wilson County fair so we had plans to attend the fair that night. He worked all day to move almost 100 bales of hay to spell out “Will you marry me”. I was upset that evening when he was late picking me up and said that he was too tired to go to the fair. Little did I know how hard he had worked that day! He made arrangements for a pilot and a plane to take us for a spontaneous afternoon flight on Sunday. While up in the air looking down at the ground beneath us, there it was! I turned around to find him with the ring in his hand. When we landed, all of our family was waiting to congratulate us.

I got engaged last night. I am a childhood cancer survivor and yesterday was 14 years from my bone marrow transplant. My boyfriend and I had planned a weekend trip to Nashville to celebrate my 14th anniversary. Little did I know that this celebration would end with a proposal.

I woke up Monday morning to breakfast cooked for me and I was presented with a list. I love Dr. Seuss, so the page said, “you’re off to great places! Today is your day! Your mountain is waiting, so get on your way.”

Then there were various words listed. My instructions were to check off the list while going on a scavenger hunt throughout Nashville that celebrated being a cancer fighter and my bone marrow transplant. We took a total of 16 plus pictures and posted them throughout the day on Facebook and Instagram so our friends and family could follow the story. It was perfect:) I had no idea that this was ending in a proposal!

Some of the tasks on the list included: find a piece of your legacy, breakfast, daily paper, your fondest memory, funny face, stunning selfie, two straws, make a difference, get a little nostalgic, act like a child again, do something great at, lunch, make a difference, etc. it was a perfect day:) I got to revisit all of my favorite places that held such a special meaning to me from when I was sick with cancer. Towards the end of the day we ended up at my favorite park which was in between Vanderbilt and Ronald McDonald House ( 2 places that I

spent a lot of time at).

He stopped me under this awesome sculpture and it placed us right in the middle of RMH and Vandy. He talked to me for about 5 minutes telling me everything that a girl wants to hear on her engagement day then proceeded to get down on one knee! I said YES and of course the ring is beautiful!

However, the surprise doesn’t end there. We later went on to eat at P. F. Changs. After dinner he then presented me with a folder full of emails from past and current nurses and doctors, my parents and my bone marrow donor. There was even a letter in there from my favorite medic student who lives in Texas.

Josh worked really hard on getting that email! I opened this folder and bawled my eyes out as I read through each one. Perfect ending to my perfect day:) I am soo blessed and I cannot wait for the future

Jonathan’s family owns a 200 year old farmhouse out in Alexandria. He and I, along with his mother and grandmother, had been renovating it over the past year in hopes that one day we would start our lives there together.

One morning before church he called and told me one of the doors had blown open and we had to go repair it before church. Once we got to the farm, he got his tool bag and we went on the front porch. He turned and looked at me, hugged me, and with tears in his eyes began to tell me all of the things he loved about me and how much he wanted to spend his life with me. He knelt down, unzipped the tool bag, and pulled out a Tiffany and Company box all tied up in a little white bow. I immediately started crying and of course, said Yes!

The night I said I DO:

We arrive at a corn maze and begin to find our way thru the corn field, turning this way and that way….we stumble upon ….. Candle lit pumpkins on hay bales with WILL YOU MARRY ME? …as he got down on one knee and proposed to me as a photographer, Allison Cox captured our special moment with our parents hidden in the corn field to see our special moment!

My engagement day started early Saturday morning, May 11, 2013. It was graduation day at Cumberland University. I had been a nursing student at Cumberland for the past two years and walking the stage at Memorial Hall to receive my diploma was the main thing on my mind that day.

Nursing school is tough. It takes determination and dedication and it takes your time. Blaine and I met on our senior trip to Panama City Beach Florida back in 2009. He is from Selma, Alabama and to say the least, our relationship was a long distance romance. Long distance relationships take time, too. Going to college and studying nursing while maintaining a boyfriend some five hours away was challenging. I think it made us stronger and it paid dividends during the last few semesters of nursing school.

The years of seeing each other only on weekends helped us during the times I had to devote most of my time to studying and concentrating on nursing school. You can imagine how excited I was to finally have extra time to spend with my boyfriend after finishing my last semester.

My parents had planned a graduation party at their home after the graduation Saturday morning. Blaine’s parents and

grandparents as well as my family and several friends were all on hand for the party. It was a beautiful May day. We were just about ready to eat as my dad called everyone together to offer thanks to God for our food. He asked us all to bow our heads and then he prayed.

I don’t remember much about the prayer, but I noticed Blaine had kneeled down right in front of me. I was puzzled and thought he was maybe tying his shoe, but then I remembered he was wearing his boots. Then I noticed he had a ring in his hand and about the same time my dad said Amen, everyone was focused on Blaine.

He took my hand, removed his golf hat and placed the ring on my finger as he asked me to be his wife. Of course I said yes as tears rolled down my face!

I graduated from nursing school that morning and was engaged to be married to the love of my life that afternoon! What a day!

Tons of camera flashes and many hugs later we enjoyed a great meal and fellowship with family and friends. It’s hard to believe we are less than 90 days out from our wedding day. We chose to have the ceremony at my parent’s house and plans are slowly but surely coming together. June 14 cannot come quick enough.

My husband took me on a surprise trip to Atlanta, Georgia. I had no idea where we were going or what we were doing. We ended up at the Georgia Aquarium where we got to get in the water with the Beluga whales! When we were playing with the whales the trainer had the whale bring over a yellow inflatable ring that said Jennifer will you marry me? – Johnathon. It was a dream come true in so many ways!

I had never had any desire to run. Within months of dating, I was hooked. After many running dates, Dustin talked me
into running a half -marathon with him in Nashville. On 11/13/2011, our training paid off. As I approached the last mile , I spot my husband standing on the sidewalk as he had already finished. He ran the last mile with me and we crossed the finish line holding hands. With tears and shaky hands, he got down on one knee and asked me to marry him.

Kirsten always said she did not want to plan a wedding while she was in college, so I asked her the day she graduated from

college. I planned a graduation luncheon for our moms at The Magnolia Room in Murfreesboro. While she was in the restroom I showed her mom and my mom the ring but asked them to keep it a secret. Later that evening I planned a dinner with our dads at Mere Bulles restaurant downtown. I scheduled a horse and buggy ride to arrive half way through dinner.

For many weeks I had been asking her how much she loved me and she would reply.. “this much” with arms stretched wide. At the halfway point of the horse and buggy ride I again asked… “how much do you love me?” She responded with holding her arms wide open. I responded by getting on one knee in the buggy and presenting her with a ring and I said… “I love you this much!” When we returned to the restaurant, Kirsten’s dad had ordered champagne for everyone around us and we were greeted with a big CONGRATULATIONS from the entire restaurant.