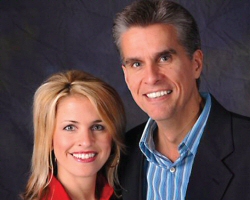 He looks like Ted Danson, but he acts like Jim Carrey. At least that’s what members of his congregation tell Jim Frease, pastor of Joy Church International in Mt. Juliet,

He looks like Ted Danson, but he acts like Jim Carrey. At least that’s what members of his congregation tell Jim Frease, pastor of Joy Church International in Mt. Juliet, possibly the fastest-growing church in Wilson County — maybe even in the State. A little over eight years ago, the church started with just 17 people and currently has over 1,300 people attending its three services each weekend.

In a culture where many churches experience growth simply by attracting church hoppers from other congregations, Joy Church stands out. A large thrust of JCI’s mission has always been to reach the unchurched or at least those who have been out of church for many years. In 2011 alone, 359 people made first-time professions of faith in Christ.

“I always tell new people not to get too distracted when we talk about numbers. But at the same time, each one of those numbers represent a precious heart to God,” Frease said. “We count souls because souls count.”

The Akron, Ohio native attended the University of Tennessee in the early 1980s, where he studied economics. But God had other plans for him, he explained. A self-described rabble-rouser, Frease had a violent temper and worked as a bouncer at a bar in Akron when he was younger. His mother, Peggy Frease,

who now lives in Mt. Juliet, continued to pray for her son, and he came to faith in Christ when he was 20.

When he left UT to pursue a calling in ministry, his first position was a custodial job at a church in Knoxville. “I mowed the lawn faithfully, and I did it so well that I graduated to taking out the garbage!” he admitted. “I really do believe that this helped develop a servant’s heart in me by not simply doing ministry for money, but just doing ministry because we love God, and we love people.”

Eventually he became a youth pastor and then started a Bible school, World Changers Bible Institute, which still offers classes in conjunction with the church today. Sometime around the year 2000, though, he began to feel a stirring to start his own church. “About three years before we came to Mt. Juliet, God dropped the seed in my heart to be a pastor while I was doing one of my favorite things… fishing! I turned to my wife and said, ‘If we ever pastor a church, here is what we would do…’ After that, it germinated and developed and blossomed over the next three years into a full-blown, God-given desire to be a pastor and to pursue what we believe was God’s direction.”

The Freases and five other couples began looking at locations in Middle Tennessee. Several people told him that he should check out Williamson or Sumner County. “At that time, about all Mt Juliet had was a Micro-tel, a Waffle House and a Cracker Barrel. We went to all those other places but didn’t really feel that was where God would have us to be. We came back and fell in love with the Mt. Juliet area, and we just knew in our hearts that this was where we were supposed to plant the church.”

They began renting a facility on Charlie Daniels Parkway, right next to the park. The location must have spooked Frease when he discovered that seven churches had been in that building in only three years. But he was determined to break that trend. “I am not sure about the other churches and we don’t want to denigrate them in any way. All I can say is that with Joy Church, we really felt strongly about developing a church where we led with integrity. Here at Joy Church, we are not about religion; we are about a relationship with a loving heavenly Father through his one son Jesus Christ. We are not about tradition; we are about the Word of the living God. And we are not about simply enduring life; we are actually about enjoying life!” Hence the church’s name.