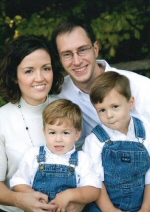 We’ve all thought about it. When you hear about someone, close to your age, who just found out they have cancer, you put yourself in their shoes, right? Maybe you haven’t, but most of the people I know have. Women have a tendency to do that, especially when her life resembles yours. She has children, she’s your age (or close to it), she’s busy with work and husband, and laundry and church and all the other thousands of things we worry about, but really don’t matter. If you’re like me, you think of that diagnosis and think, “I wouldn’t have time for that.” You hug your kids a little tighter and promise to spend more time ‘savoring’ the moment rather than worrying about the next. But then something happens and we forget the promise we made. And before long, we’re back to our old ways. Stressing about homework, those last 10 pounds, a friends’ baby shower or whether or not our kid gets enough playing time in a ballgame. Then someone comes along who changes everything. Someone who for reasons unknown to her becomes profound evidence that God does exist and FYI, he’s as wonderful and faithful as you’d been taught but never really believed.

Enter, Sara Walker. Sara and I met for breakfast one morning just a few short weeks after she endured a loss of biblical proportions, followed by news of even more devastating proportions. Had it been me and some stranger called to say “Hello, I don’t know you but I’d like to tell thousands of people you don’t know your story,” I probably would have hung up the phone. But Sara didn’t. She agreed and a week later we were sitting at a table with her 3 year old son, Scott, sharing funny stories about our children and watching Scott ingest a large amount of his favorite drink; chocolate milk. I had never met Sara but felt like I had known her for years. I’d heard about her through emails from friends and a few postings on facebook. Then one morning I stood talking to the host of WANT’s Coleman and Company, Coleman Walker. When I told him about a young woman I’d heard about that just found out she had cancer, Coleman told me that young woman was his daughter in law, Sara Walker. Sara’s the wife of his son, Brian, a 1993 graduate of Lebanon High School.

After a normal and otherwise uneventful pregnancy the first weekend in December of 2010 Sara noticed the inactivity of her unborn baby girl. As a Physical Therapist, Sara worked in the same building as her Obstetrician so soon after arriving at work the following Monday she phoned his office. After an ultrasound, she received news that would change her life FOREVER. There was no heartbeat. A few days later, Anna Walker was delivered and for a few moments Sara and her husband, Brian looked like all new parents, holding and kissing their little girl. The difference was that they were kissing Anna goodbye.

“It was surreal. I was alone when I found out her heart had stopped beating. Nothing prepares you. It was hard to believe how quickly our lives changed in that moment.”

After the stillbirth, Sara was tested for multiple medical issues to pinpoint what could have caused it. “The test results showed that I had some genetic mutations of my blood clotting factors and that meant I’m at a higher risk to form blood clots. The doctors felt like a clot may have caused a heart attack or stroke in Anna.”

Just four weeks after Anna’s birth, Sara began to have severe pain on her right side. So severe she had hard time breathing. Because of her medical background, Sara began a process of self-diagnosis. She referenced one of her many medical books to find out what could be causing the pain. “The first thing I thought of was a blood clot. It could have been gall stones too. After doing more research, cancer might be the reason for the pain. We were told to go to the emergency room to rule out a blood clot in my lungs and give doctors an opportunity to evaluate the pain.” Sara said while she carefully cut Scott’s pancakes.

When the attending physician told Sara and Brian that tests didn’t show a clot, Sara asked if cancer could be the cause. “He was like, ‘No that would be 150 on my list of causes for the pain.’ That made me feel better but it also made me feel like I was being a hypochondriac.” It was during further testing to look at the lungs that doctors noticed several abnormal spots on her liver. According to Sara, it was an ‘accidental discovery’. More tests concluded that she had colon cancer and those questionable spots on her liver meant the cancer had metastasized. Sara had stage 4 cancer

“When Brian and I got home from the hospital I took him up to our room and started giving him instructions. How I wanted my funeral. Things I wanted him to tell our boys. Things I wanted him to remember; like how much I love him and how he has made me so happy.” Those were dark days for Sara. Like most of us, she could only think about her family and how hard her diagnosis would be on them. Then something happened. Prayers started flooding her inbox and the Walker’s church family rallied around their friends forming a heavenly sweetness around Sara. Love in the form of cards, food, visits and phone calls humbled the self-described ‘shy and insignificant’ woman. “My mom, dad, brother and sister arrived and with them their strong faith in a loving God began lifting me up. Our church family embraced us in a way I had never experienced before.”

God made his presence known and with that, He brought back Sara’s hope. Just a few weeks after starting a blog chronicling her treatments and how she was feeling, her site was flooded with visitors-more than 130,000! Wellwishers from as far away as Florida and Texas began leaving encouraging messages and prayers. People she’d never met left stories of God’s hope and promises. “I don’t know God’s plan for my future. What I do know is that He only asks me to live one day at a time. I refuse to worry about tomorrow. That just takes away from today. My mission is to savor each and every moment.”

In our conversation we never talked about a prognosis, instead we talked about life. She said in the past she would be worried about the stack of laundry littering her living room floor, but now, compared to reading a book to her boys or snuggling up next to them while they sleep or running with them outside, laundry is just not something she wants to savor. “Life is so short.

On April 9, 2011 Sara’s classmates from Belmont’s Physical Therapy program arranged a 5k Race to benefit Sara and Brian. More than 1,200 participants took part in the 1st Walker Live For Today 5k. More than $30,000 was raised through the race and donations. Money that can be used to help offset medical costs, take a family vacation or start a college fund for Camden and Scott. At press time, Sara had just completed her 6th and final chemo treatment. To send her a note of encouragement visit her caringbridge site: www.caringbridge.com/sarawalker