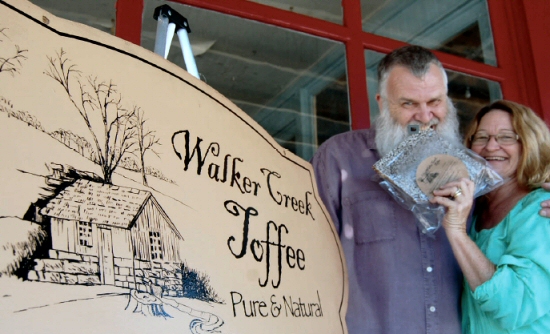 The sweetest place in Wilson County?

The Walker Creek Toffee candy kitchen inside the former American Hardware Store in Watertown may lay claim
to the title. “We’re the best-kept secret in Watertown, and we’re not a secret,” said Bruce Mott, who created the toffee recipe and produces it with his wife Cathy McCook.

The duo began selling their toffee a few years ago when they made it in their home kitchen in Alexandria, but last January, Mott, who does residential remodeling, replaced the floor in the century-old structure and built a 500-square-foot kitchen and a 250-square-foot packing room.

Thus, one night a week, they handcraft their toffee and caramel candies in small batches right here with a little help from their friends. Mott began making toffee in 1978 and continues to adapt the recipe.

“The toffee recipe is in every cookbook known to man. I’ve taken a similar recipe and refined it to the formula we have today. I have a chef gene,” says the native of Carmel, Calif., who opened Nashville’s first vegetarian restaurant, The Laughing Man, in 1975, and has been in construction the past 35 years.

“Toffee is a hard candy to make, and I appreciated the challenge. You have to cook it very hot in order to reach

Bruce with caramel maker and wrapper: the machine is a batch roller designed for taking a batch of caramel and turning it into a rope of caramel the perfect temperature, about one degree away from being burned. You can’t leave it alone,” Mott said.

“I will still mess up a batch from time to time. I’ve had to learn a lot more of the chemistry of candy. Ninety percent of the time we get it right, and I won’t put it out for sale when it’s not right.”

“We can’t even put out samples if it’s not right. I’ll just really watch it,” said McCook, who shares samples of their candy during Watertown’s bi-annual milelong yard sales. “Bruce has the eye and nose, and I’ve developed the same senses.”

The couple’s Toffee, Salted and Short Mountain Shine Caramels may be purchased at Nona Lisa Pizzeria and Lulu’s in Watertown and at the Nashville Farmers Market on Saturdays. Or it may be ordered via their Web site. The candy will also be sold at the Wilson Living Holiday Expo Nov. 22-23 at The Mill in Lebanon.

So how good is this toffee, which consists of creamery butter, cane sugar, raw California almonds and Belgian chocolate?

Jason Scott of Jackson, Tenn., who obviously has a sweet tooth or two, sent in this email testimony:

“We recently stopped by the Nashville Farmers Market and discovered your product. My wife, son and myself were blown away with the quality and taste of your caramel and toffee. We purchased one bag of toffee and one bag of each of your caramels.

Using a large wooden spoon, Bruce Mott stirs creamery butter as he prepares to make a batch of Walker Creek Toffee from his own tried and true recipeAfter returning home to Jackson, Tenn., my wife took the remaining candies to work to share. Needless to say they were loved by everyone!!! I now regret sending them with her because I’m out. LOL. You have a wonderful product and we look forward to future orders. Thank you!!”

Says McCook, who was born in Union City, Tenn., and was working for UPS in Atlanta when she met Mott at the Appalachian Craft Festival in Smithville in the early 2000s, “He made toffee for me before we were married. I had to put it in the trunk of my car so I wouldn’t eat it all.”

Mott is definitely the salesman. “I will walk into a business and say, ‘Hey, eat this.’ I figure once I get it in their mouth, it’s sold,” said the candy man,

Cathy McCook spreads rich Belgian chocolate over the hot toffee who across the years gave his toffee away as gifts.

“People would ask, ‘When are you gonna start selling it?’ We started putting the framework together and another year or so later got a home kitchen approved by the Department of Agriculture,” recalled McCook, noting their candies became part of Pick Tennessee Products in 2009-2010.

“There was a certain ambiance to making it at home,” said Mott. “We were selling a couple of hundred pounds a year and never knew it would grow.”

In 1999, the couple purchased the old hardware store on East Main Street, never contemplating they would one day transform part of it into a candy kitchen.

“The building never had electricity for the most part. We had to rewire it, plumb it, and we built this building within the building. Owning a building like this is an incredible stewardship. We love this old building,” said Mott. As for making the toffee, the steps include preparing and heating the ingredients, pouring it out to cool, covering it with chocolate and almond dust, allowing it to cool more and then wrapping it.

“It’s been done the same way for hundreds of years,” said Mott, who uses a three-foot long wooden spoon to mix the sugar, butter and almonds as the blend heats in a giant copper kettle. “What we’re doing when we’re making toffee is caramelizing sugar with butter,” he said about the cooking process, as the temperature in the kettle rises to around 300 degrees.

The two variables to how the toffee turns out prove to be the almond and butter supplies. “We try to get the same stuff from the same guys all the time but sometimes they throw a curve ball at us. This year we used 50-pound blocks of butter from Purity. It’s more consistent,” the candy chef said.

Cathy McCook regularly peddles Walker Creek Coffee on the sidewalk in front of the century-old American Hardware Store during the bi-annual Watertown Mile-Long Yard Sale. Here she offers free samples to passers-byThe sweet couple expects to employ four or five helpers this holiday season and have already been teaching Watertown’s Jennifer Folsom and Brad Dawson how to make the candy. “Bruce and Cathy have been family friends for a while and I love them to death. Having the opportunity to work for them fits my family needs and the needs of Walker Creek Toffee, so it was a no brainer,” said Folsom, who makes caramels and does the finishing work on the toffee. “I have helped out seasonally for a couple of years and been a lover of that toffee for as long as I have known about it.

“I think the most import thing about the candy is that you have to learn by doing. You can’t read and know how to do it. It’s more of an art but there is science in there. You have to get in there and make some good ones and make some bad ones and fine tune,” said the young candy maker, whose husband Brad, a chemist at Environmental Science Corporation in Mt. Juliet, began making toffee in July under Mott’s watchful eye.

Let it be noted the candy kitchen is not open to the public, however Mott says, “If we’re here and not in the middle of production, I’ll give people a tour, but when I’m cooking candy at 300 degrees, it’s just not safe.”

Walker Creek Toffee’s primary customers have proven to be corporations that present the candy as Christmas gifts, while, coincidentally, in the Watertown area, Mott often portrays Santa Claus at holiday events.

“We fill lots of big orders. We like for businesses to say, ‘We’d love to give your candy to all our clients. Can you ship?’ Yes, we can,” said McCook. “We’ve grown the company slowly to make candy in a timely manner. Now I want more people to know about us,” Mott said. “We’re real careful to keep the quality where it needs to be. We’re open to some retail relationships, but it’s got to be the right fit.

“My favorite part is when people eat their first bite of the toffee. I’ve seen people’s demeanor change 180 percent. They squeak or perform an eye roll. I think we have a great product. I love introducing people to it.

“In residential remodeling, sometimes people are not happy with me, but everybody is happy with candy,” said the Candy King of Watertown

Made in Watertown, this pure and natural candy is produced in small batches using creamery butter, cane sugar, raw California almonds and Belgian chocolate. The toffee may be ordered online or purchased in Watertown at Lulu’s and Nona Lisa Pizzeria; and at Green Door Gourmet in West Nashville, Art & Invention Gallery in East Nashville and at the Nashville Farmer’s Market (10 a.m.-3 p.m. Saturdays). Also available are Salted Caramels and Short Mountain Shine Caramels.

For more info or to place an order, go online to walkercreektoffee.com or call (615) 295-4137. The candies will be available at the Wilson Living Magazine Holiday Expo Nov. 22-23 at The Mill in Lebanon.