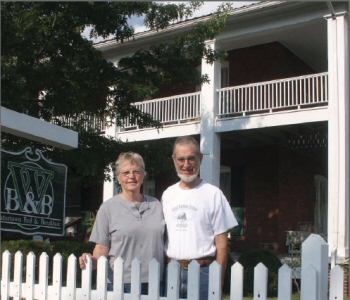 Move over Tori and Dean, This B&B is the Real Thing… If the hustle and bustle of the pending holiday season has you prepared to cancel  Christmas in favor of Festivus, it may be time to take a 24 hour breather. Rest and Relaxation can be found less than an hour from Nashville at the Historic Watertown Bed and Breakfast located just off the square in Watertown, Tennessee.

Move over Tori and Dean, This B&B is the Real Thing… If the hustle and bustle of the pending holiday season has you prepared to cancel  Christmas in favor of Festivus, it may be time to take a 24 hour breather. Rest and Relaxation can be found less than an hour from Nashville at the Historic Watertown Bed and Breakfast located just off the square in Watertown, Tennessee.

There’s something special about staying at that perfect, quaint B&B. Indulging in a morning curled up in a comfortable bed, waking to a mouth watering breakfast (that you don’t have to cook or clean up after) and beautiful surroundings that feel less like a hotel and more like home. Sounds heavenly and that’s just what Innkeepers Sharon and Robert McComb offer all their guests.

The McComb’s were looking to take a breather of their own when they decided to purchase and renovate what was once a railroad hotel originally built in 1898. They purchased the property in 1988 and opened the doors to the public in 1991 after more than three years of renovations.

Their story begins in 1964 when Bob and Sharon were married. After 24 years of marriage and living in five different states and Canada the McComb’s- who were living in Nashville, Tennessee at the time- decided to take the plunge and open their own business. It wasn’t until Sharon stumbled upon an article about a couple who had renovated an old hotel into a B&B that they decided to do the same. “It was the lifestyle we were looking for and a B&B seemed to be something we could do even after retiring.”

They began their search and after more than six months they discovered a diamond in the rough that would become their home. With its soaring ceilings, rich trim work and solid wood doors, Robert and Sharon agreed that they wanted to update the property while so maintaining the integrity and charm of the historic home.

In all the McComb’s renovated four guest rooms, a two – room suite, library, large gourmet kitchen, lobby and upper and lower verandas. All guest rooms were given a name distinguished by some of the places the Innkeepers have lived during their 44 year marriage. The Billings Room named for the 2 years they spent living in Billings, Montana, The Augusta Room named for time spent living in Augusta, Georgia, The Van Wert Room for time spent living in Van Wert, Ohio, The Watertown Room- for obvious reasons and of course The Tennessee Suite, named for all of the different cities the couple has lived in the state.

When the McComb’s first moved to Watertown, they were both still working full time in Nashville so that meant a long commute to work everyday. While the drive was long, it allowed their youngest daughter to graduate from high school with her friends instead of having to
transfer in the middle of her senior year.

After three years of working two jobs, Sharon retired from nursing in 1994 and focused on running the B&B full time. Bob retired from Nashville Plywood in 2007. What started as a simple idea of opening a B&B transformed into a thriving business that included hosting weddings, dinner parties and a full gourmet breakfast open to the public. They’ve scaled back now and serve B&B guests only. So if you are craving a savory Scotch Egga favorite among visitingguests- you will have to book a room.

They’ve also had their share of famous guests. Just last summer Hollywood Actress Lindsay Wagner stayed at the Historic Inn while in town filming “Billy, The Early Years” a film based on the life of Reverend Billy Graham. In fact, the Bionic Woman didn’t just sleep at the Inn; she went to work in the kitchen and cooked for the McComb’s. When it comes to living the good life Robert and Sharon McComb are doing it. The dream of owning a B&B has been a reality for more than 15 years and according to Sharon she has no intention of slowing down. “I love it. I love cooking, meeting different people and entertaining. We’ve always loved to entertain so it makes this business perfect for us.”

Whether you are planning a visit for business or a romantic getaway without the kids a stay in this late 19th Century Building- which has now been added to the National Register of Historic Placeswill delight your senses with its rich history and your palate with its rich food.