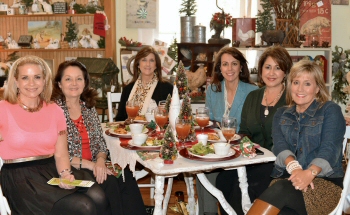 The long, wide front porch is a perfect spot for serving or dining, or simply relaxing in the porch swing and rocking chairsIt’s not often that the group of the busy ladies who contribute to Wilson Living Magazine, and our fearless leaders, Becky Andrews and Angel Kane, get time for a ladies day out lunch, so we were thrilled with our excursion to Watermelon Moon Farm.

Watermelon Moon Farm is a lovely two story home on Trousdale Ferry Pike, about half-way between Lebanon and Carthage at the Wilson County/ Smith County line. Our group of six was graciously welcomed to join two other groups of ladies visiting that day, with the same idea in mind: an afternoon get-away with friends for some fun, in a wonderfully relaxing atmosphere, delicious food, and shopping for neat finds amongst the beautifully decorated dining rooms and gift shop.

The Farm is owned by Emily Steinburg-Cash, who returned to the area after living in Florida for many years.

The “Summer Kitchen Suite and Peacock Room” (available to rent) was formerly the historic home’s summer kitchen. The cozy suite includes a full private bath, cozy bedroom, separate sitting room, and view of the garden. Emily and husband, Harold Cash, have lovingly restored the home to its former grandeur. Emily’s style and creativity shines throughout the dining rooms, with nature inspired décor, whimsy, unique art, antiques, and collectibles artfully displayed. It’s simply gorgeous, and compliments the historic home. To our delight, much of it was also available for purchase! We had time to relax and chat with one another, something we rarely have time to do, and then browsed the collection of home décor and gift items.

The 25 ladies from the “Tea and Friends” group from Goodlettsville Nazarene Church, and the six high school friends from the 1973 class of DuPont High School who regularly meet for lunch, shared our enthusiasm.

“We love Emily, and Watermelon Moon. Her food is fabulous,” said Paula Christianson from the church. “Our group comes in the fall, and usually again in the summer also,” she added.

Karen Hedges of Mt. Juliet said, “A couple of years ago, our group of friends from high school re-connected, and now we get together for lunch about once a month. We have loved coming here,” she said.

For a relaxing get-away, you and your guests can enjoy a stay at the farm’s bed and breakfast cottageEmily and Harold open Watermelon Moon Farm seasonally, kicked off with an annual open house in the spring, and ending each season with their Christmas events. The farm is not open to the public daily, so all events both public and private do require reservations. Throughout the spring, summer, and fall, numerous events are held, including an Easter luncheon, popular Mother’s Day luncheon, open houses, and other events. The home and grounds are used for parties, luncheons, receptions, weddings, church groups, baby showers, birthday parties, Red Hat ladies, clubs, and family and friends who simply want to get-together. Watermelon Moon Farm is also available to rent as a Bed & Breakfast. Emily also offers workshops throughout the seasons on a variety of arts and crafts, and the use of herbs in cooking.

Emily has a long career in hand-painted art and hand-crafted décor, and is an accomplished instructor. She says she learned southern cooking and her hostess skills from her mother, but had to learn gardening and taking care of farm animals after purchasing the farm.

The farm will be closed to the public until Spring 2014, while Emily and Harold prepare and decorate for

Now is the time to plan your visits and make reservations for next year. To view the calendar of events, workshops, and learn more about the farm, visit their facebook page, or webpage at www.watermelonmoonfarm.com. You can also email wmmoonfarm@yahoo.com, or call (615) 444-2356. Emily and Harold might be out tending to the garden or taking care of their many farms animals, so be sure to leave a message on the phone so they can call you back.

Our WLM ladies are excited about our next trip to Watermelon Moon Farm, and we look forward to meeting you and your friends there too!

The farm’s beautifully restored historic home, is listed on the National Register of Historic Places as the “Wm. Washington Seay House.” It was built by William Washington Seay between the years of 1835-1845. Built as an exact replica of a Louisiana plantation home, the quality craftsmanship is believed to have been influenced by his many trips to New Orleans, where he admired the ornate woodworking and stone masonry.

him 350 acres of his land for “five dollars and love and affection” on the condition that William could not sell the land, and his father could take timber from it. The entire Seay family farm was more than 1,000 acres. Their vast estate remained in the family for more than 150 years. Among father John Seay’s gifts to his sons were also slaves, who later helped to build the grand home. It is said that the slave who skillfully built the stone chimney and cellar was granted his freedom. Legend has it that following the Civil War, many of the freed slaves continued to make their homes at the farm as workers.

William Washington became a successful tobacco trader and businessman, which led to his trips to New Orleans for trading and exporting. It was following these trips that he built the grand home. During their marriage, William and Ann had nine children. Sadly, the Seay family also saw their share of tragedy during and after the War Between the States. Their son William Aurelius died during the Civil War, while serving in the 24th Confederate Tennessee Infantry in a battle in Perryville, KY. His father William took a team of horses and wagon, and claimed his son’s body, returning it for burial in the family cemetery not far from the mansion. One week following their son’s death, their daughter Cinderilla died following childbirth. Matron Ann Seay died in 1872, and William Washington Seay died in 1874. The home then became the property of his son, Thomas. In 1884, Thomas’s wife Lelia committed suicide, hanging herself in the doorway of the downstairs bedroom, believed to be overcome by the death of their only son Sidney. In 1890, Charles Seay, Thomas’s brother, was shot and killed on the front porch by his sister’s son during a family argument.

Following Thomas’s death, he left the home to his sister Eliza. She maintained the home until her death, when it was purchased by Daniel Elijah Seay. It should be noted that the property was originally located in Smith County. Dan Seay, however, wanted to run for Judge, which required a residence in Wilson County. He managed to have a small parcel of the farm, on which the Watermelon Moon Farm home sits today, annexed into Wilson County. The rest of the property remains in Smith County. After Dan’s death in 1957, the entire Seay estate was sold. Emily Steinburg purchased the home and 18 acres in 1991. In 2002, she and Harold married, and the two of them have continued to restore the home to its former glory.

Mix mayo, cream cheese, cheddar cheese and onions. Put in greased quiche pan. Top with crackers and bake at 350 degrees for 15 minutes or till bubbly. Top with Pepper Jelly just out of oven so it melts over the top. Add bacon optional… all good!!!