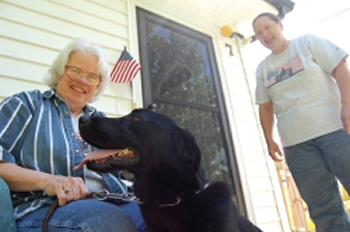 PHOTOS and STORY BY KEN BECK

Carefully cruise down one-lane Anderson Hollow Road in the tiny Cottage Home community in the very southeastern corner of Wilson County. Splash across the shallow creek, and you’ll soon find yourself at Brodie K9 Center where the kennel out back holds but one dog.

Owner-trainer Cindy Brodie would love to see more dogs parked at her canine training center, but she’s recently delivered the first two graduates of her Partners for Patriots program. Service dogs Dyson and Feather have new homes in Red Oak, Iowa, and Brush Creek, Tenn., respectively, with disabled American veterans. Among the characteristics that drew Cindy to working with dogs three decades ago were the creature's loyalty, intelligence and unconditional love.

“They are always there for you. The dog doesn't care who you are, what you do or what kind of mood you're in. They don't judge,” she says. “And I love to see what you can do with them. There are so many different ways that they can help humans. I guess I am drawn to that dog and human bond, and how the dog works with people.

“I worked horses for many years. I got so beat up after two concussions, two skull fractures and three cracked ribs. Then I found how much I enjoyed training dogs as a tool to help law-enforcement personnel because the dogs could do things the officers couldn't do. We don't have their sense of smell. Not only do we train them to find drugs or bombs or accelerants, but they protect the officer.”

With more than 30 years of experience in training dogs for law enforcement and search and rescue, she has two projects going on here: one is business, the Brodie K9 Center, and the other is service-oriented, Partners for Patriots, which she and Jim, her husband of 23½ years, founded in 2009 as a way to honor her late mother.

Right now, they’re looking for more qualified dogs to train for veterans, plus scrambling for funding, which comes mainly through private donations.

“We’ve put everything we have into this,” says Cindy. “We don’t leave the dogs. We practically never have a vacation. We really need

to find a couple of sponsors for the next two dogs, which is about $22,000 each for the cost,” said Cindy, 50, who works a night job as a resident mom at New Frontiers, a home for at-risk teenage boys, in Dowelltown in DeKalb County.

“We have to get the dogs, then we do a complete health physical. The training time is nine months to 18 months depending upon the tasks the dog has to be taught. After we train them, we deliver the dogs to the veteran as well as stay and work with them in their home for up to two weeks.”

“Helper dogs in the house are invaluable to disabled vets. The dogs keep you (the veteran) going because they’ve got to be doing something,” said Jim. “The emotional scars are sometimes worse than the physical scars. Being with a dog gets them out.

“Cindy has high criteria for finding the dogs. They’re not easy to find. This is all we’ve ever done—dogs.”

Dyson and Feather were placed with hearing-impaired veterans. Each has been trained to alert their master to sounds like the doorbell, ringing phone, smoke detector, police siren, tornado warning siren and alarm clock.

Service dogs can be trained to handle a variety of other needs such as physical impairment, sight impairment and medical alerting for such conditions as diabetes or epilepsy. These helper dogs can assist with household tasks like taking laundry out of a dryer or opening and retrieving items from cabinets or drawers, and they can turn lights off and on.

The Brodies try to use rescue dogs from animal shelters if they have the right qualities. The traits they look for?

“Their temperament: they have to be bombproof, which means that nothing upsets them,” said Cindy. “They must want to help and be a very human-bonding dog. They must want to be with their owner all the time.

“They have to learn to balance when a human puts their weight on them. They have to like to play. What we teach and train them is to play the game: they’re helping the person by picking something off the floor, opening the refrigerator door, making the bed.”

Linda Hyland, who lives in Brush Creek in Smith County, was the first Tennessee veteran to receive a helper dog from Partners for Patriots.

“Where’s my baby? Oh, I can see her tail wagging,” said Hyland one early May afternoon after Brodie drove into her driveway to deliver Feather, a 3-year-old female black Labrador retriever, to her home.

A week after Feather had settled into Hyland’s home, the hearing-impaired veteran reported on their progress.

“She lets me know when somebody comes and knocks on the door or when somebody drives into the drive. The other dogs bark, but Feather comes to me and goes back to the door,” said Hyland. “She also alerts me to the microwave and phone, which I can’t hear unless I’m in the same room.”

Hyland has two pet dogs, Nessie, 8, a Scottish deerhound mix, and Duffy, 5, a Scottie, as well as pet bird, Commodore, 9, an African gray.

“Feather and the dogs are best buddies. Cindy and I took them for several walks before we introduced them,” says Hyland, who has also taken her helper dog on trips to Kroger and Lowe’s.

“Things are going quite well. I took Feather to work with me the last couple of days. She had to learn I’m not going to leave her. Her job is to stay pretty close to me so she can help me. She takes her job seriously and doesn’t want me to get out of working range.”

Hyland works two days a week as a veterans’ service officer for Smith County in a Carthage office.

“I help veterans file claims with the V.A. and answer their questions the best I can. I know who to refer them to. I enjoy it. I feel like I’m still serving,” said Hyland.

The other Partner for Patriots grad, Dyson, a 3-year-old male German shepherd, is also a hearing-ear dog. He now belongs to Army

veteran Jim Houser, who lives in Red Oak, Iowa. Born in the Brodies’ kennel, Dyson alerts Houser to similar sounds as Feather does for Hyland, but he also is tuned into the voice of Houser’s son.

A native of Omaha, Neb., Cindy says, “I’ve always loved animals. My mom told me when I was four that I told her I was gonna train ‘aminals’. I’ve been training dogs for 30 years.”

Before dogs, a teenaged Cindy trained horses and competed as a barrel racer in rodeos. Residing in Cottage Home for the past seven years, she and Jim have plenty of pets of their own.

Cindy worked as a veterinarian tech before she became a trainer.

“I decided I wanted to work with them rather than on them,” said the dog lover who became a certified dog trainer in 1983.

“We work with praise and repetition,” said Jim, a native of Sioux City, Iowa.

The couple operated their kennel in Iowa for years where they taught obedience classes to dogs for the public but also trained law-enforcement dogs. They offer the same services at Brodie K9 Center.

“We train with problem-behavior dogs and work on behavior and image. We train protection and estate guard dogs, police K9 dogs for narcotics detection as well as arson dogs and bomb dogs,” Cindy said.

The couple and their sons moved to Tennessee in 2004 for the warmer climate and due to the fact that after 9/11 many Iowa police departments began to train their own dogs rather than use private trainers.

“The next two Partners for Patriots dogs are probably going to be in the training program for 15 months. Of course, there are the same bills in running a kennel as in running a house,” said Cindy, who has a long waiting list of veterans who would like to have dogs.

“We get lots of them who have emailed us. I’ve turned away 75 to 100 veterans in the last six months.”

As for what motivates Cindy and her husband to put in the hours of work they do to train a dog for an American who has given a portion of his or her life in serving the United States of America, she says, “Jim and I believe that success is measured by what you give, not by what you have.

“Our service men and women sacrifice so much, as do their families. Us training and providing a service dog to those veterans in need is a way of saying thank you. It is a small token compared to what these men and women have given all of us. Our military men and women don’t ask why. They serve proudly, risking their lives daily for our precious freedom.”

PARTNERS FOR PATRIOTS is a non-profit organization whose mission is to obtain, train and provide service dogs to disabled veterans. For more information or to make a donation, go online to www.partnersforpatriots.org, look for it on Facebook or call 408-5040.

Brodie K9 Center offers all breed of dog training and helps teach dogs obedience and protection skills as well as assists with problem-behavior modification in such areas as excessive barking, jumping on people and aggressive behavior. For info, go to www.brodiek9.com.