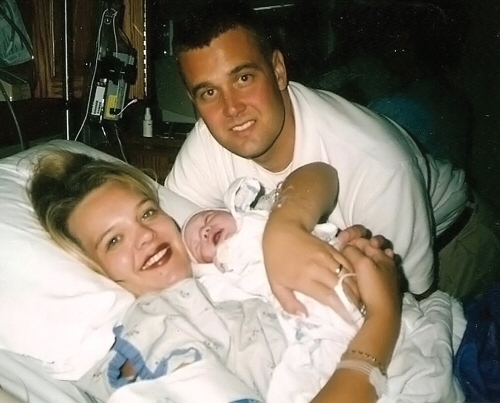 When Karen and Stephen Hackett learned they were expecting their first child they started preparing like any first time parents would.

When Karen and Stephen Hackett learned they were expecting their first child they started preparing like any first time parents would. They read "What to Expecting when your expecting,” registered for all nursery necessities and day dreamed about the moment they would meet the newest member of their family face to face. However, when the day came to find out the sex of their unborn child, that excitement was replaced with fear and uncertainty. On January 9, 2002 a routine ultrasound revealed they were having a boy. But, it also showed a problem with the heart. They were sent to Vanderbilt the very next day for additional testing. Stephen and Karen were told their child had a life threatening heart condition known as Hypoplastic Left Heart Syndrome or HLHS. “The name is scary enough but when we were told he would need open heart surgery it was devastating. It formed a cloud over the excitement of having our first child." Karen says.

HLHS is a serious and rare congenital heart condition. In this syndrome, the fetal heart does not develop normally, so the left ventricle is undersized and far too weak to pump blood to the body. Some children survive a few weeks with this condition, but without surgical intervention, heart failure is inevitable. Doctors gave few options for the expectant parents. After consulting with a team of specialists including a Pediatric Cardiologist, Stephen and Karen opted to have the Norwood Procedure performed when their son, to be named Jordan Cage, was just a few days old.

Jordan Cage Hackett was born on June 7, 2002 at Vanderbilt University Medical Center and when he was just 4 days old doctors performed the first stage of the North Procedure.

The Norwood Procedure is a set of staged surgical procedures performed over 3-4 years. Though it alleviates the symptoms of HLHS, the procedure cannot “fix” the heart. It  merely buys time, as much as 30 years, before transplantation is usually necessary. “It’s overwhelming when you have your first child but when you couple that with the news that your newborn is also going to be fighting for his life it makes it that much more stressful.” Karen said her blue eyes showing the strength of a thousand men. After more than 6 weeks of recovery in the hospital, Jordan came home for the first time where friends and family anxiously waited to welcome home the little boy who had his mother’s adorable little nose and his dad’s strong chin. “We didn’t sleep much that first night” Stephen says with a chuckle and Karen quickly interjects, “We didn’t want to sleep. We enjoyed every minute of getting to know him and the first time he smiled we probably scared him because me and Stephen were both practically screaming we were so excited!”

Eight weeks after being at home Jordan returned to Vanderbilt for the second stage of the procedure. While the surgery was a success, Jordan developed a life threatening blood infection and on October 14, 2002 Jordan passed away. “You’re never prepared for the death of a child even if they are critically ill.” Stephen says. Memorials from friends and family began pouring in shortly after Jordan’s death. While Karen and Stephen were grieving the loss of their child the idea came to use the memorials to start a foundation in honor of their son. The mascot of their new foundation would be the prayer bear they bought shortly after finding out Karen was pregnant. The bear had a recording of the classic children’s prayer, "Now I lay me down to sleep". This bear stayed with Jordan throughout every hospital stay and was eventually buried with him. Knowing that little bear was with Jordan when they couldn’t be still provides a great deal of comfort for Stephen and Karen.

When it started, The Jordan Hackett Foundation provided meals to parents staying at The Ronald McDonald House while their children were awaiting medical treatment and provided necessities to those families who had no one to lean on. Karen added, “We had the support of family and friends while we were going through everything with Jordan. When we stayed at The Ronald McDonald House we noticed how many families didn’t have that support. A lot of times at Vanderbilt parent would have to stay with their sick child and the other would have to leave and go back to work or care for the other children at home. That’s when we decided how to use a portion of the Jordan Hackett Foundation funds.” When money from memorials made began to dwindle, Karen and Stephen started brainstorming ways to raise additional money. Because Stephen had started running as a way of dealing with the loss of his son he thought a 5k race would be a great way to raise money. The official course, full of beautiful scenery and hills will challenge even the most seasoned runner. Karen also started a Bunco group a few years ago that’s also helped raise money for the foundation.

Since the Jordan Hackett Foundation was formed in 2002, the organization has raised over $100,000 through the 5k Run/Walk, the Bunco Bash and memorials made by other families. While it’s a lot of work, the foundation serves as a type of therapy for the Hackett’s. “The foundation helps keep Jordan’s memory alive and gives us the opportunity to pay it forward after all the help and support we were given.” Karen adds. Many have benefited from the generosity of The Jordan Hackett Foundation. A large portion of money raised through the foundation is donated to Vanderbilt Children’s Hospital. Part of that money goes to sponsoring a family sleep room. The children’s hospital offers 12 sleep rooms. The Jordan Hackett family sleep room is across from the pediatric critical care unit and is used by parents of critically ill children so they do not have to leave the hospital during their child’s stay. The majority of the money donated to Vanderbilt Children’s Hospital through the Jordan Hackett Foundation is earmarked for pediatric heart research. “Vanderbilt recently created a pediatric heart research facility and they are making amazing strides in heart research. In fact, they are on verge of reversing some heart defects.” Karen says confidently.

In addition to generous donations to Vanderbilt Children’s Hospital, the foundation also funds two scholarships each year for local students. So far, nearly a dozen students have been granted scholarships. The Foundation also sponsors dinners and meal tickets for families staying at the Ronald McDonald House. In the midst of personal tragedy, Stephen and Karen Hackett created a foundation that is sure to be responsible for helping find a cure for the disease that took their son. With their selfless dedication to this cause, the Hackett’s hope to ease the pain other families of children with critical illnesses face everyday.

The Jordan Hackett Foundation is a 501(c)(3) organization.

For sponsorship or race information you can log on to www.jordanhackett.org.

The 7th Annual Race for Jordan 5k Run/Walk is scheduled for May 1, 2010 Rain or Shine. Cordell Hull Damn, Carthage, Tennessee. The race begins at 8:00 a.m.