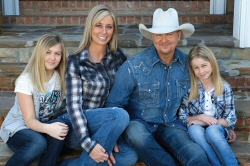 Tracy Lawrence almost went to college to be a youth minister. Instead, he came to Nashville and became an overnight singing star with country music radio his pulpit.

The Singer-Songwriter gets down to business, but being Dad is top job

Lawrence, who turns 44 on January 27, celebrated his 20th anniversary on the country charts last fall. He came to Nashville in September of 1990, and by November 1991 saw the release of his debut album, Sticks and Stones, which went to platinum status for one million records sold and produced four Top-10 singles.

In retrospect, he realizes he didn’t handle the speedy ride to fame with all the trappings very well. “I think there were some bumps that really did my career a lot of serious damage in the early days. I did some stupid stuff. But I look back over it. I’ve learned a lot from all of it,” said the singer-songwriter.

These days a more mature Lawrence enjoys life with wife Becca and daughters Skylar, ten, and Keagan, eight, on their farm between Lebanon and Mt. Juliet. He’s immersed himself in the business of selling records in a business that’s changed tremendously since he sold his first record. And he’s found a way to scoot back and forth from his home to Music Row as well as tour without losing track of what’s most important.

Addressing fatherhood, he explained, “It’s mellowed me a great deal. It really made me adjust my priorities a lot, and I guess enabled me because it made me realize that there was something else in the world that I needed to think about. Before, I thought about myself.

“I’m very thankful that I’ve got a career and make a good living, but everything that I do now is for my children. It all revolves around my family,” said Lawrence, who performs about 100 concerts a year, mainly Thursdays through Saturdays, thus allowing him most of the week at home.

“We were both in our 30’s when we had kids,” said Becca, the entertainer’s wife of 10½ years. “It was like a switch just changed. He was pretty quick to follow into that dad mold. He is just so understanding. He’s an awesome dad.” And he’s not too shabby in the kitchen either. “He cooks dinner and serves it on the table every night,” Becca, a native of Beaumont, Texas, said.

As for parenting, she said, “Both of our girls are so different, and he seems to understand them on different levels. He has a very special way with each of them. “Keagan, who is eight, is the spitting image of him. He sees everything she’s gonna do before she does it. He can get down on their level. I can tell them something 12 times, and he says it once and they understand it.”

While life with family on the farm seems to be flowing smoothly, another version of Lawrence energetically makes his own kind of music on Music Row, where early last year he opened the offices of the Tracy Lawrence Music Group. He’s convinced he’s got a good game plan in place.

“The vision is to really do things different. We’re focusing heavy on the Internet, social media. We’re really trying to find creative ways to market me as an artist and improve my brand, because realistically my days as a radio artist, unless the format splits, are over. I can’t compete with the younger acts and the labels that are out there, but there are a lot of other ways to go about it,” said Lawrence, wearing his chief operating officer hat.

“I enjoy the business side of it. I like staff meetings. I like the strategizing. I like talking about the marketing stuff. In college that was always my favorite. I love advertising and marketing and looking for angles and utilizing the Internet and things that we have available to us to market the albums and promote shows. I really have enjoyed doing a lot of that. It’s just a completely different side of the brain,” he explained of juggling business with creating words and music.

Lawrence planted roots in Wilson County in 1993 after looking at land west, north and south of Nashville. “I had a realtor that took me around, and I looked, I bet, at 10 different properties, and when I found that place, I fell in love with it. I just fell in love with the house. It was very country. It was at the end of the road, and I wound up buying the house with 15 acres, and over the next several months I acquired every piece of property I could get at the end of that road,” Lawrence recalled from his office.

“It was so very rural. It was so close to town. I could be in town (Nashville) in 25 minutes, but back then everything was still two lanes. There were no four-lane highways. Once you got to the end of the interstate, it was all just country roads around there. It’s just changed a lot in the last few years. I loved it out there. I loved the place. It was quiet and removed. It was somewhat isolated.”

While he has contemplated raising some grassfed beef on part of the farm with friend and fellow country music singer Darryl Worley, he is considering making his corner of the county not as isolated.