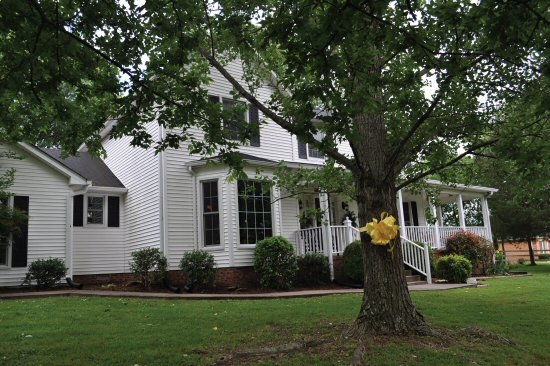 AND STAY A WHILE AS WE VISIT THE CARVERS

One of my earliest memories is of my mother playing a record by a man named Johnny Carver and the song she repeatedly played on the record was “Tie a Yellow Ribbon ’round the Ole Oak Tree.” It was a constant for many years in our household,a tune my Mother still sings today. So to get to meet the legend who made this song famous, (who just happens to live in Lebanon), was a full circle moment for this Wilson Living writer.

The Carvers of Lebanon, Johnny, Lisa and their son, Brandon, have made their lovely home on Horn Springs Road their residence for over 23 years. With its panoramic views of the hills and fields of Wilson County, it’s the perfect getaway for a family who has been on the country music road for many, many years. Johnny Carver grew up in the town of Jackson, Mississippi. Raised in a musical family, he was singing and playing guitar by age five and would often accompany his aunts and uncles in the family gospel quartet. Quite an accomplished musician, he can play the guitar, bass, steel guitar, piano and drums. At the age of 13, he had his first band and was performing on television and the radio. No doubt, from an early age, Johnny knew music was his calling.

Upon graduation, the crooner hit the road with his band, first moving to Milwaukee

, where a two week gig turned into four years, and later making the trek to Los Angeles. At 24, Johnny got his first record deal and had the house band at the infamous Palomino Club in North Hollywood.

“Del Shannon known for the rock-n-roll hit “Runaway” is often credited for finding me,” notes Johnny. “I would go on to record for Imperial Records with the likes of Fats Domino and Ricky Nelson, with Del as my producer. Those were some good times.”

For 26 years, Johnny was on the road doing what he does best, singing the country classics including many of which he made famous. In a career that has spanned five decades, he has had over 36 charted singles, two of which were Number #1 hits and five of which made the top ten. “I’ve had quite a run,” he remarks as he looks over the many album covers that now hang on the walls of his home in Lebanon.

“The three hits he is most known for are “Tie a Yellow Ribbon”, “Afternoon Delight” and “That Sweet Ole Lady of Mine,” remarks Lisa, his wife of 28 years and no doubt Johnny’s biggest fan. “He has won countless awards from BMI, the CMA and has been all over the world touring. We have had quite an adventure together.”

In 1966, Johnny moved from Los Angeles to Nashville, as he knew his focus would be in country music and “there is no better place to produce country music than Nashville,” Johnny notes. And after a few years of living in the big city of Nashville, he decided to make
Lebanon home.

“I was driving around one day and found Wilson County. It reminded me of home. It had the friendliest people I had met in a long time and everyone was very genuine. It also had wide open spaces. Before I knew it, I had bought land and moved myself to Coles Ferry Pike in Lebanon,” remembers Johnny. “I was singing with my band, touring the world and would come home and tend to my tomatoes and corn on my little farm in Lebanon.”

“And then one day, I walked into Ideal Cafe, which used to be a local restaurant located on the square. And there I saw the prettiest young lady I had ever seen. After asking Jo Anne, the restaurant owner, who she was, I called Lisa and we had our first date. The rest

Lisa, who happens to sing and play guitar herself, has often accompanied Johnny on his tours. “We have been all over the United States, Canada, Europe and Hawaii. In London, England, Johnny performed at the Wembley Festival, a unique, truly amazing five-day event.”

Many of you probably also remember seeing Johnny perform at the Grand Ole Opry, and on various television shows including Hee Haw, The Porter Wagoner Show, The Ralph Emery Show and with Bill Anderson. And most recently, Johnny appeared on the RFD Network’s Family Reunion Show.

During their down time, Lisa and Johnny opened Carver’s Family Fun Center where those from Lebanon will remember many a Saturday night spent “Boot Scootin” or doing the “Texas Two-Step” while Johnny and his band played all their hits. Others may remember spending weekends skating with family and friends or celebrating birthdays with skate parties. “I decided at a certain point in my life, especially after we had Brandon, that it was time to slow down. But I didn’t want to give up music, so instead of taking my
music on the road, I brought it to my new hometown. We were there for 12 years and it was quite a successful establishment.”

Another dream the Carvers had together was to build a home for themselves and Brandon. “We used to live next door in a big white house that we had purchased with 15 acres, but we wanted to design and build something just for us. So 23 years ago, with the help of Walter Rogers, we built this home. It is perfect for us. At the time, Horn Springs was “in the country” but even though the country has grown around us, we are sort of secluded up here on this hill,” Lisa comments.

And one look inside the home and you realize it is truly a labor of love—a love that has recently been remodeled. “I actually love to work on the house and a short time ago decided it needed an update. I’ve done quite a bit of the tile work myself with the help of my friend, Stephanie Page. The decorating was done with the help of another friend, Dell Karp. In fact, Dell and I have been exploring the idea of assisting others to re-design their homes or re-purpose furnishings that need a little updating.”

And after seeing all the handy work in Lisa’s home, I think she may be on to something.

From the beautiful entry way filled with family photos to the upscale dining room, the home has a beautiful, classic feeling throughout. The kitchen recently updated with granite and tile opens to Lisa’s favorite room in the house, their sunroom.

“This is where we hang out the most. With all these windows, we love to sit here and read, listen to music and just enjoy the outdoors.”

Upstairs, the Carvers laughingly refer us to the “wall of Brandon” that can be found at the top of the stairs, where photos of their son

from birth to adulthood are lovingly displayed. Brandon, the Carvers only child, no longer lives at home during the school year, having just finished his first year at Lipscomb University; but he does enjoy being home on most weekends and during the summer months. And these parents couldn’t be prouder of their academically accomplished son who just happens to carry that Carver musical gene, as he is also an exemplary pianist. “Brandon loves music. He can play all sorts of instruments and is very talented. He wants to be a lawyer but you never know what he might become. Whatever he chooses to be, I know music will always be part of him,” gushes his very proud Father.

The remaining upstairs of the home houses all the bedrooms, which are comfortable and cozy thanks to Lisa’s decorating skills.

“My favorite part of the whole house though is our front porch,” remarks Johnny. “It wraps all around the house and from up here I can sit and watch everything. I take care of all the landscaping that you see. I love tending to it and maintaining it. Lisa and I often end our days out here, talking, swinging and sometimes even singing.”

But Johnny and Lisa are not only spending their time reminiscing about the past, there are plans in the works for a new CD and Johnny plays about 20 selected events each year including the Wilson County Fair.

The family is also sharing their musical talents with their friends and neighbors by teaching piano, guitar, and electric bass. “We love to pass on our love of music and we give back as much as we can, especially in our musical program at Bethlehem United Methodist Church. As a matter of fact, Brandon is the full-time pianist at our church, Bethlehem.”

And recently Johnny has been asked to participate in a new venture coming to Lebanon. “Just the other day, I got a call about the Wilson County Country Music Hall of Fame Building to be located at Fiddler’s Grove. It’s going to be much like Bradley’s Barn, with a banquet area and seating for 500 where various musicians will take center stage. I’ve been asked to provide memorabilia from my career to be on display and am very excited about it. I believe it will be a wonderful new entertainment venue for our area.”

Asked to sum up what he is most proud of, in his life filled with so many achievements, and Johnny smiles at Lisa and Brandon.

“You are looking at them. I love my family, our home and this town I call home. I am a very content man. And the musical career, it was just the cherry on top.”

To learn more about Johnny Carver, you can go to www.johnnycarver.com where you can hear his hits, learn more about his background, purchase merchandise and see many photos of he and other performers.