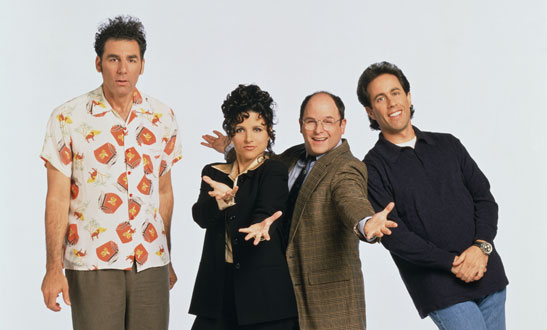 I recently had a couple of sick days. I used this couch time very productively—watching episode after episode of Seinfeld, from a boxed set I got for Christmas.

During one episode, in the Notes About Nothing (this is like a subtitle commentary you can turn on or off during each episode—another sign that I’ve gotten in too deep), they quoted Seinfeld talking about comedy with Entertainment Today back in 1991. He said that when you get to a certain level in comedy, people aren’t just laughing, they’re talking like you. The notes concluded: “After this episode, seen by 10 million, people were talking like Seinfeld.”

These three days of overexposure to Seinfeld had exactly such an effect on me. I was Seinfeld-ized. Seinfeld got all over everything I did.

Sometime during the Seinfeld Day 1, my husband texted me.

“Are the gas guys there yet?” he said. We’re having a line dug so we can start using the HVAC we just had put in.

“Will you go out and ask them how long the job will take?” he returned, with a smiley face.

“What? Go out and talk to those guys?” I tapped back. “I can’t talk to them! It’s a bunch of men in hats and vests! They have a big truck! What would I say? They’d laugh me right back into the house. ‘Stay in there where you belong, pajama lady.’ That’s what they’d say.”

“And what is it with the hard hat thing anyway? They’re digging. In the ground. What exactly are they worried about? The sod flying up and hitting them in the forehead? The other guys getting them with a shovel? Maybe it’s just some kind of working-man code: wear the hat, you’re on the job. You get respect. Take the hat off, you’re off the job. No respect.”

“What?” he asked again. “Baby, have you had too much Tylenol?”

“I went out and talked to them. It was the most humiliating experience I’ve ever had. ‘What do you know about Caterpillars?’ they said. ‘You handle your business, we’ll handle ours. Get back to your Pinterest, or whatever it is—we’ll deal with your husband in the future.’”

On Seinfeld Day 2, I was interrupted while cooking dinner by a phone call from my sister.

“Hey, it’s me. I was calling to see if we’re still on for tomorrow.”

“Sure. What time did you say?”

After I got off the phone, I complained to my husband.

“There’s no protocol for getting out of casual plans except for the Long Pause. I can’t actually say no; I already said yes! I’m a nice person—what can I do?”

On Seinfeld Day 3, I wore a recently purchased hat to cover my unwashed hair.

“Where’d you get that hat?” a friend asked me.

“You could say that.”

“This one? Don’t be ridiculous!”

“You could give it to me for late Christmas.”

“Late Christmas! I don’t re-gift things I bought for myself! How rude.”

“You could give it to me for my birthday.”

Things I wasn’t able to do during the Three Days of Seinfeld, but briefly considered doing because of the Seinfeldian influence:

Conduct drawn out and anguished conversations with friends about their love lives; engage in protracted conversations with friends about social etiquette; argue with my eccentric Jewish parents (my parents aren’t Jewish or eccentric enough); seek revenge on local business people for ripping me off; wear ridiculous articles of clothing and get flak; perform stand-up; end up in the hospital for a fake heart-attack; walk into a neighbor’s home and eat food from their kitchen; help  a struggling immigrant business owner; eat a box of Junior Mints.

The Seinfeld has been out of my system for almost a week and I’m beginning to feel a little more normal.

The only residual symptom?