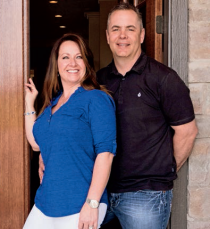 FINDING A HOME WHEN YOU LEAST EXPECT IT

In fact, they were searching for a piece of land in which they could build their dream home……

FINDING A HOME WHEN YOU LEAST EXPECT IT

purchase and devote nearly a year completely renovating a French, country style home located on the west end of Lebanon.

In fact, they were searching for a piece of land in which they could build their dream home. “We had almost given up on finding that perfect spot to build, when one day our real estate agent, Lynda Burge, sent me a listing that had an existing home on it. Before I could reject the idea, Lynda asked me to take a look at it before making a decision,” states Penny. “Even though it needed a lot of modification to fit our vision, Roger knew that this was it.”

Shortly after closing on the property, the Austermillers brought in Interior Designer, Meleia Bell, who has a hallmark style of integrating house and garden. For the Austermiller home, Bell’s plan included a careful edit of the six year-old structure, which like many homes constructed in the last decade was built for girth, while skimping on the practicality of livable space and fixtures.

Renovating a home is not something Roger and Penny considered lightly. With their booming business, two daughters – seven year-old, Joslin and five year-old, Julia – and too many other professional and personal commitments to name, it was clear from the beginning they needed the right team in place to bring their vision to life. “Without the trifecta of our contractor, Jack Bell, our interior designer, Meleia Bell, and our realtor, Lynda Burge, we would still be looking for the ‘perfect building lot’.”

While the home itself underwent an extensive makeover, the rest of the property remained as is. It includes a gated, private entrance, heated saltwater swimming pool, and beautifully manicured acreage.

The couple proclaimed, “When we did the math on how much it would cost to build the home we wanted, along with all the additions this property had, our

This tile medallion in the master bath is one of Penny’s favorite details in their home decision became a no-brainer.”

Before beginning the project, Penny chose to keep the home’s strongest features: solid hickory flooring, family room fireplace, character-rich interior doors and hardware, extensive trim and molding. With the exception of these items, the majority of the Austermiller home went through renovation starting with the rear wall of windows that peers out to the covered porch and pool. It was removed to make way for a bright sunroom. Custom built-ins were also added to each room. Penny’s two favorite additions are the custom designed tile floor medallion in the master bath and the generous den fireplace purposefully flanked by an equestrian oil that pays

The den with generous stone fireplace and distressed wood flooring makes it a perfect place to curl up with a book.reverence to Penny’s father, a fan of horses, who passed away in March 2014.

In rebuilding the interior, they adopted a central hall floor plan that fits true to the home’s French country style. The home is blatantly invested in authentic simple woodworking and earthly hues of creams and grays. To create unity, they strategically repeated elements, such as crystal and glass chandeliers, quartz counters, and Carrera marble floors.

Outside the home, a new decorative stone patio, great back porch, and dining area were added. After the pool house was constructed, the gardens were redesigned in geometric patterns to match the home’s groundbreaking exterior.

With the renovation completed in early 2014 and beautiful spring weather in full swing, the Austermillers are already enjoying festivities with friends and family in their innovative home. This year they plan to host ten or more gatherings. Penny smiled as she added, “What’s the point in having this space without enjoying it with the people we love.

In addition to the pool house and garage, copper trim was added on the exterior to compliment the home’s French Country design.

1. After high school, Roger moved from Knoxville, TN to San Diego to reunite with family and surf.

2. Roger’s start in roofing began in 1986 in San Diego when he was offered his first roofing job. After gaining valuable experience in residential & commercial roofing, Roger decided to move back to Tennessee in 1992.

3. In 1995, Roger started Austermiller Roofing & Construction as a sole propriortiership.

4. Penny is a 1997 graduate of Middle Tennessee State University where she earned her degree in Political Science.

5. Roger and Penny were introduced in 1999 by a mutual friend at a group outing on the lake. They, then, married in March 2000.

6. After substantial growth within the company, Roger decided to incorporate in 2006, and changed the name to Austermiller, Inc.

7. With this achievement, this married duo has the perfect balance to run a successful business. Roger has the knowledge and experience about roofing & construction. Penny’s experience in accounting and business comes in handy as she oversees the office operations of Austermiller, Inc.

8. In 2006, after nearly six years of marriage, Penny and Roger welcomed their first daughter, Joslin.

9. In 2009, baby sister, Julia joined Joslin and the Austermiller family was now complete.

10. In 2010, Roger and Penny relocated Austermiller, Inc. from a home office to a commercial building on Lebanon Road in Mt Juliet. Since then they have thrived from three field supervisors and three office staff to ten field supervisors.

Looking for some home décor inspiration? Check out www.wilsonlivingmagazine.com for a private video tour of the Austermiller’s home. Penny will take viewers on an up close and personal tour of her home and share some of what she learned while renovating.