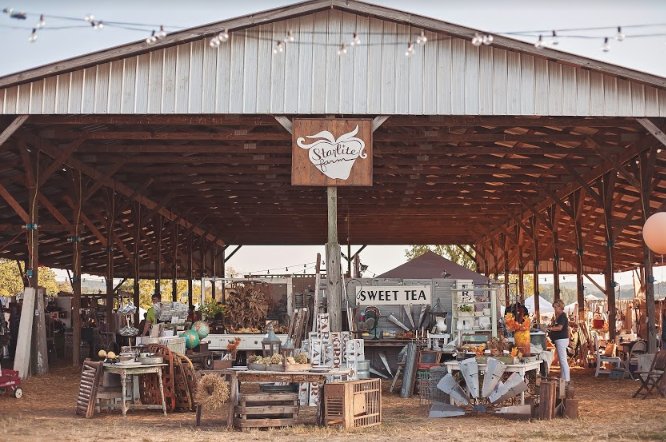 How this barn sale got its start in Middle Tennessee

Barn sales have been catching on in other parts of the country, but it wasn’t until Christy Stone created The Strawberry Patch in Hartsville that there was one in Tennessee.

The Strawberry Patch Barn Sale is a staple of the Middle Tennessee barn sale aficionado. It is big, well curated and situated in a beautiful rural spot in the countryside of Trousdale County, an hour east of Nashville. It was listed as one of Country Living Magazine’s seven barn sales to visit in 2015 (that’s countrywide), and in February of this year, it was a Reader’s Choice pick in Flea Market Style Magazine.

Not only does The Strawberry Patch continue to be among the best, but it was quite literally the first of its kind in Tennessee.

Stone was inspired by some similar events that were becoming popular out in the Oregon and Washington areas. She met a woman named Gina Bishop who was selling at the Country Living Fair in 2009, and the Bishop inspired her with her aesthetic and her “you can do it” attitude.

“She had the cutest booth set up there, and I just wanted to meet her. She and I got to talking, and she was telling me that she had a barn in her backyard and would sometimes sell her own stuff there,” Stone recalls. “And she basically encouraged me. She didn’t know me from Adam, but she said, ‘What are you waiting on? Just do it!’”

In the first year of operating her own sale, Stone also took a scouting and inspiration trip to Washington to see the mother of all sales, called Barn House Boys, which she still says is the best she’s ever seen.

“Never have I seen anything remotely close to theirs,” Stone says. “Everything just flowed — everybody had the same look. I liked it because it was easy on the eye, though I realize people sometimes prefer some variety.” 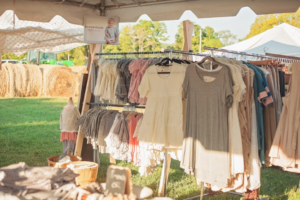 Most of Stone’s shoppers don’t come from the county this sale is held in. They come from Nashville, Hendersonville, Lebanon and other places. Vendors tend to return year after year, having been carefully vetted by Stone’s discerning eye. Still, she likes to have 10 or 15 new vendors every year.

“I know that shoppers want to see something different,” Stone says. “Although many want to come back and buy from those they know, people don’t want it to be the same show every time. It’s not easy on new vendors, because shoppers tend to buy from people they’re familiar with it seems like.

“When I’m considering a new vendor, I’ll look at how original it is — is it something new? You know, everybody wants to make signs, on pallets.”

However, she says she’s still surprised sometimes at what’s popular and sells.

“Some people really just love to buy a T-shirt that they’ve seen a dozen other women wearing. The average person is OK with wearing something that everybody else wears,” Stone says. “I have to remember that just because I wouldn’t wear something others are wearing doesn’t mean other people are that way.” 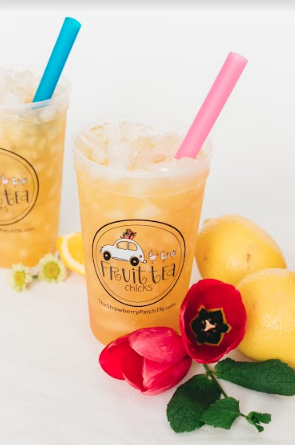 In addition to keeping up The Strawberry Patch, Stone’s new endeavor has her packing up and taking on the role of a vendor at other sales.

Fruit Tea Chicks is a simple booth with a simple concept: fruit tea from a secret recipe, served over ice with beautiful seasonal garnishes. People love it. Like with The Strawberry Patch, Stone seems to have found success just by packaging and presenting something that she herself was in love with.

“I just found an old diary entry from 2009,” she says, “where I was describing the barn sale and what I wanted to do, and I wrote that I wanted to sell my fruit tea there.”

But in the past few years, when she decided to make fruit tea into a business, she brought her own recipe into her home kitchen and started working on it until she felt she had something unique and inimitable, something truly her own. She planned for the Fruit Tea Chicks to be a little business that her teenage kids (Chloe, 14, Kailen, 13, and Stone, 11) could get involved in.

So far, it’s been a success. She recently sold 150 gallons of fruit tea in a weekend — one cup at a time.

Having done a year’s worth of events as a vendor, she’s now taking the Fruit Tea Chicks to another level: She bought a camper and is going to put the whole operation in there. As of now, she says setup can take about four hours — bringing in heavy coolers, carting gallons of premade tea and ice and setting up a tent. Once the camper is set up and everything installed, not only will she be able to set up and tear down quickly and make sales directly from the camper window, she’ll be able to make the tea onsite: a huge time saver.

It seems clear Christy is the kind of dreamer we’d all like to be. She can manage both ends of the creative process: picture something fabulous and actually get it done.

There’s no telling what that kind of a spirit will accomplish in the future.

For more information on The Strawberry Patch, check out their Facebook and Instagram pages, or visit Thestrawberrypatchtn.com.