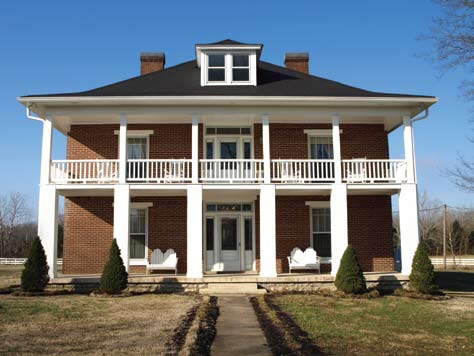 Jean Robertson never imagined that while on a leisurely drive one afternoon in 1985 that she would stumble upon her dream home. “The owner, Ms. McClanahan was sitting on the front porch and I just wanted to ask her some questions about the home. The more we talked the more interested I became until she finally said ‘I’m selling it if you want it, make me an offer’ I did. Then thought about how I was going to break the news to John.”

Jean Robertson never imagined that while on a leisurely drive one afternoon in 1985 that she would stumble upon her dream home. “The owner, Ms. McClanahan was sitting on the front porch and I just wanted to ask her some questions about the home. The more we talked the more interested I became until she finally said ‘I’m selling it if you want it, make me an offer’ I did. Then thought about how I was going to break the news to John.”

John is Jean’s husband of more than 40 years and at the time he was enjoying life on the lake in “his dream home” with no intention of moving. “She came home and said I bought a house, let’s go look at it.” After arriving at what would be their future home for the second time, Jean was able to take a closer look on the inside and what she saw this time was a little less magical. “The house needed MAJOR work. Everything was falling apart. There was no heat except for the 13 fireplaces, some of which were not even working and the electric needed to be completely redone.”

While Jean and John were both familiar with delicate process of restoring antique properties – careful not to take away the value and original grandeur – they had little warning as to what to expect from taking on a project this large. “We couldn’t even get insurance on the house until we completed some of the renovations and one of the upstairs bathrooms could only be accessed through the outside veranda.”

They can both laugh about all the ups and downs of restoring their beautiful home nestled on more than 50 acres on Lohman Road in the heart of Wilson County now, but in the middle of restoration it wasn’t always easy to put on a happy face. Jean added, “It was like living in a construction site. Our kids, who were teenagers at the time, were less thrilled than we were but we made it through.”

More than twenty years after taking that afternoon drive Jean Robertson is just as excited about the purchase she made that brought her family even closer. “When you are family, you are in this together.” While talking to the Robertson’s in the home’s magnificent formal dining room it’s obvious how they made it through the tedious task of renovating a pre-war home to its original beauty.

It took nearly six years to complete all the renovations. While more delicate tasks like resurfacing the extensive woodwork in the home were left to experts, the Robertson’s completed the rest on weekends and at night. The progress seemed to move at a snails pace but Jean insisted that even the smallest detail not be overlooked for fear that it would take away character from the original masterpiece. “We tried not to change many things about the home except to add  closet space, replace some of the flooring that was in ill repair and add a kitchen since kitchens on homes this old were separate from the house.” Since most cooking was done on wood burning stoves, fires were prevalent and to keep a fire from devastating an entire home, kitchens were built separate from the main house.

The home was originally built in 1906 by the Lohman’s and took several years to complete because the senior Lohman would only allow one person to complete one step at a time and a lot of the contents came from overseas including some of the mantles. All woodwork in the home is oak, poplar or cedar and one mantle is made of pristine Rosewood. John Robertson said if you think this home is beautiful now you  should have seen it back then. “This place was something back then. The walkway in the front of the house led out to a grocery store, post office and drug store. So most people from around here had to walk over to this house to buy home goods, check their mail or get medicines.”

While John says that the renovations are complete, Jean has one more big restoration in mind. “The old kitchen outside would be beautiful if we were to restore it. It has the big stone fireplace still in tact. One day we’ll get to that.” Upon hearing of her plans, John counters, “I have been trying to talk her into tearing it down for years and she won’t have it. I just can’t even think about doing that right now.” Now that their kids have grown up and moved out, the farmhouse looks a little big for the two Robertsons but they have no intention of moving. “I can’t imagine moving. When you spend this much time and energy on something it becomes like your child.”