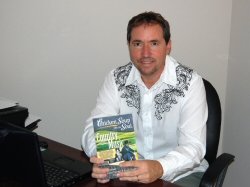 Like any red-blooded American guy, I’ve always enjoyed my ‘stuff’ – guitars and amps, electronic gadgets and my book and CD collection. And even though, as a person of faith, I know these things are just “wood hay and stubble” that will one day turn to dust and “moths and rust will destroy,” as scripture tells us, it’s one thing to say it and another to literally watch all of your possessions turn to dust before your eyes.

On Sunday August 18, 2002, my wife Clare, our eighteen month old daughter Abigail, and I came home from church to our new home in Mt. Juliet’s Willoughby Station and had lunch. Afterward, Clare and Abigail both lay down to take a nap, and I took a glass of iced tea and the Sunday Tennessean to the back deck to read. After a few minutes, however, the August heat, even under the shade of the patio umbrella, was too much for me, and I returned to the kitchen.

I often wonder how my life would have been different if I had just finished the sports section before retiring to the cool of the indoor air conditioning. If I had stayed a few minutes longer, surely I would have seen the flecks of ash that were beginning to float from the back of our neighbor’s house, where a fire was quickly spreading through their home. He and his family were at the mall that day and would not find out what had happened until later that evening.

After I finished the paper, I drove to the home of my friend David Stinson in Chandler Point, who was going to help me work on my car. No sooner had I

gotten there, however, my cell phone rang. It was Clare, speaking in a tone that can only be compared to some sort of “Irish keening”. I had never heard that sound coming from her before. All I heard were the words ‘fire’ and ‘come home now’.

Although we felt for our neighbors and their plight, we were glad that no one was harmed. As we stood there watching the flames begin to consume their home, however, the wind suddenly shifted, shooting flames toward the roof of our house. Within seconds, our roof was consumed. At that point, it was too dangerous to go back inside our house to retrieve anything. It had simply never occurred to us that the fire would spread so quickly and with such intensity before the fire department got there. When they came, they were able to retrieve our wedding photos and a box of digital videotapes from under the stairs. I had my car keys and my wallet, and we had the clothes on our back, but over the course of the next fifteen minutes, nearly everything else that we owned was consumed.

A year earlier, we had been living in the Joelton area, but nearly all of our friends were in Mt. Juliet. We loved the people in Wilson County and loved the town of Mt. Juliet and wanted nothing more than to move here, which we did in December of 2001. Little did we know what lie in store for us a few short months later.

The evening of the fire, just as he was about to lead the closing prayer at Two Rivers Baptist Church, Pastor Jerry Sutton was informed of our plight by a church member and announced it from the pulpit. We were at the home of our other neighbors Doug and Christy Gold, and within an hour, we were inundated with bags of groceries, toiletries, socks, underwear, second-hand clothing in our sizes and even financial gifts from friends in Willoughby Station and fellow church members. Alan and Delinia Poenitske offered us the use of their home for the next week while they were on vacation, and during that time, donations of food and clothing continued to pour in. It was then that we realized how blessed we really were to be living here and to have the friends we have.

There are many other positives that came from the fire. I had planned on starting a graduate assistantship at the University of Memphis the next week, where I was pursuing a Master of Fine Arts Degree in creative writing. I had planned to commute and return to Nashville on the weekends, but now my wife and daughter were able to move with me while we sorted through the insurance claims and prepared to have our home demolished and rebuilt. The insurance also paid for our housing while we were in Memphis. And it was actually kind of nice to get rid of all the clutter and junk in our attic and garage and start afresh. It was like having a huge garage sale where everything was guaranteed to sell. The only regret I have when I look back on that time is the fact that, when we got our content settlement, I was tempted to buy an acre or two of land near I-40 but was talked out of it by a colleague who had done well in real estate. “Raw land’s usually not a good investment,” he cautioned, so we put a big chunk down on our mortgage instead. About two years later, though, plans for Providence Marketplace were announced and, well, you know the rest.

The night of the fire, all of our worldly possessions were contained in a few sacks at our feet, but we felt as rich as kings. My favorite scene from the movie It’s A Wonderful Life is the ending, when George Bailey opens the copy of Tom Sawyer to read the note from Clarence, the angel: “Remember, no man is a failure who has friends. Thanks for the wings.” As his friends and neighbors shower him with gifts, George’s brother offers up a toast: “To my brother George, the richest man in town.” I know just how George Bailey felt.

Wilson Living is pleased to introduce our newest writer, Randy Rudder. Randy is from Mt. Juliet and the author of Chicken Soup for the Soul: Country Music edition. He has also worked as an English professor at Nashville State Community College and a writer/producer for The 700 Club. Clare teaches at a home school support program in Brentwood, where Abigail now attends.

Learn more about Randy at www.randyrudder.com.