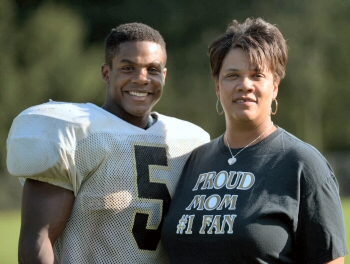 HOW DO YOU DEFINE A HERO?

In my mind, a hero is someone whose qualities better those around them: hard working, honest, generous, a team player. And when I first contemplated writing this article, I could think of no one better who embodies those qualities than “Hometown Hero”, Smith County Owls’ running back and fan favorite, Jalen Manning.

But as I sat to write this piece, I kept looking at the photos we had taken, and my eye was repeatedly drawn back to the photo of Jalen and his mother, Melissa Manning – his Number #1 Fan. A picture that says 1000 words, indeed.

I first came to know Melissa 8 plus years ago when I interviewed and hired her as the receptionist for my law firm. She didn’t have any experience with law firms, wasn’t from Wilson County and couldn’t start right away. Yet, of all the applicants, there was something about this quiet, rather reserved lady that I liked. And almost a decade later, Melissa has become much more than a receptionist – she is the first person our clients see when they walk in our door, she is the person who calms their nerves and offers words of encouragement, she is part office manager, part paralegal and full-time zoo keeper as we attorneys run back and forth to the courthouse, but most importantly she has become a valued member of our close-knit work family.

And through the years, given my love of football, Melissa has always shared with me, photos and stories of her son, Jalen. When we first met, Jalen was about 9 years old and was playing youth football. And just like my mother who thought I was the best football player on the Pee Wee Watertown Tigers Team, I figured Melissa may be a little biased when she would regale the office with Jalen’s Saturday morning football exploits.

Of course, I knew who Jalen’s father was because in 1986, when Watertown played Gordonsville, I faced speedy #25 tail-back Terry Manning on the field.

These four atheletes have been football team mates since age 7 Back row: Austin Gregory & Ethan Profitt Front row: Jalen Manning and Brad RankinWatertown was beaten that fall night and one of the main reasons was Mr. Manning himself. So, I did know first hand that there was a possibility that Jalen’s football talents were not as exaggerated as my mother’s were of me.

And as the years have gone by, the Smith County whispers that Jalen was becoming quite the football talent have grown

Offensive Lineman, Ethan Profitt has protected Jalen and watched over him since the day they met. louder and louder. During this same time, I watched as his single mother, who often arrives early, stays late and who neither snow, ice or a even a flood can thwart her drive down Highway 70 each morning, has quietly gone about her days of working, parenting and doing all within her power to assure her children have the very best. Every once in a while swapping some time here or there at the office, to insure she makes it to each and every game.

Five years ago, Melissa’s oldest daughter, Brittany graduated and went off to Tennessee Tech . And this year, her youngest, Jalen, will soon be following in his sister’s college bound footsteps. And nobody, and I mean nobody, could be prouder of their achievements then their Number #1 Fan.

Jalen Manning, at 5ft 11 inches is about to embark on his Senior season as the running back for the Smith County Owls Football Team, wearing #25 just like his father did. And at each and every game you will see his Mother, Father and the rest of the Crittenden/Manning family cheering him on. And that’s the way it’s been since the beginning.

Melissa reminisces that “Jalen has loved the game of football since he was old enough to know what it was. He studies the game, and often will study the plays of retired past players as well as the stars of today. When he was little he would always ask me or Brittany to go outside and throw ball with him – almost every single day. But you know, while I’m obviously proud of his football talent, I am most proud of the fact that he is friends with everybody. He has some fantastic friends on the team and even rival teams. He knows the difference between being on the field playing against a rival and being off the field and calling them a friend. I admire that most of all.”

Dad, Terry Manning, Jalen, Brittany & MelissaAfter his mother, father and sibling, his other biggest fan might be Smith County’s head coach Mike Dickerson, who is serving in his first year as head coach after eighteen seasons as an assistant. “Coach D” (as he is known) recalls watching Jalen play youth football as far back as fourth and fifth grade and realizing even then that Jalen had “it” when it came to running the ball. Talent that has continued to rise to the top as Jalen has progressed through youth league, middle school and right on to the high school level.

And his Number #1 Fan has not only seen to it that he has been at each and every one of his practices and games but has also assured he has been just as committed to his education, his faith and his community. “I always have tried to teach Brittany and Jalen that God blessed them with their talents and that it was important that they thanked him daily for those talents. I also taught them, that what God giveth, he can easily taketh away, so doing good in school had to always be a priority.”

Coach D notes that “Jalen is one of the most physically gifted athletes I’ve seen in a small town like Carthage. He very well could be a once in a career type player for me. Jalen is unusual in that he is exceptionally fast and exceptionally strong, despite only weighing 185 pounds. He has lots of God-given ability and seems to enjoy the weight room as much as playing the game and works extremely hard in that area.” In fact, Jalen can bench press an impressive 425 pounds.

Jalen ranks as one of the best in Smith County’s gridiron history having rushed 1,081 yards last year as a junior (even though he sat out for 2 games) and 1,234 yards during his sophomore campaign of 2011. Jalen himself says his best memory (sorry Terry) was last

year when he had a 97 yard kick off return touchdown and ran for 315 all purpose yards and 198 rushing yards against Gordonsville. And while his talents are impressive and will more than likely take him far, Jalen will no doubt catch the world on fire because of the small town values instilled in him by his mother. Jalen is admired by many in Carthage, not only because of his impressive football talents but more importantly because this young man, will always look you in the eye when speaking to you, respectfully say “yes sir” and “no ma’am” and is known for his kind and considerate nature.

Jalen is a friend to all that come across his path.  As the Senior running back competes at the high school level one last time, Coach Dickerson sees a career that will be far from over as the sun sets on the 2013 campaign. “Jalen has a very bright future as long as he keeps his eye on the task at hand. One university will be very fortunate to have him on their team next year.” Several including Louisville, Duke, Western Kentucky, Mississippi State, UT Chattanooga and MTSU are interested but at press time, Jalen is undecided as to which school he will be heading to next year.

“Right now, I’m 100% focused on this season. The guys on this team and I have been together since we were little. This is our last year together and we’re going to make it one to remember,” remarks Jalen. “There is nothing I like more than Friday nights and the feeling we all get after a night of playing well as a team.”

Smith County opens its season on August 23 against Alcoa and plays arch rival Gordonsville on August 30th in Gordonsville. The team has some rebuilding to do with 5 returning starters on offense and only one on defense, however Coach Dickerson is optimistic that this tight knit club can accomplish its goals if they work together and look to their leaders for inspiration, “Everyone feeds off Jalen, if he struggles, the team seems to struggle and when he is doing well, the team seems to do better. He’s done a pretty good job so far of taking on that role and I hope to see that continue this year.” And no doubt this final season his Number #1 Fan, his mother and my friend, Melissa Manning, admired by many for her hard working, honest and generousnature, will be there to cheer him on.