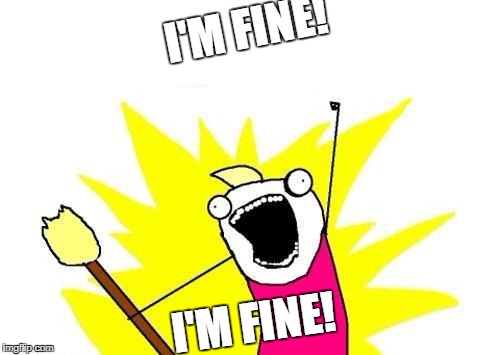 When my youngest child was six- months old, my little sister came for a visit. One of her many visits
trekking from the northwest to Tennessee that summer. That was the last summer we had we our mom.

When I picked her up from the airport, she asked how I was doing. “I’m fine,” I responded.
With a laugh, she said, “When I started labor and delivery rotation in nursing school, one of my
professors told us that fine is just an acronym for Frustrated Insecure Neurotic Exhausted.”

I don’t like to brag, but I WAS NAILING IT! FINE was my jam.

So every time someone says, “I’m fine” that’s what I think of.  Maybe it’s just easier to say what we think
someone wants to hear instead of going into a 30-minute rant about how life stinks sometimes.

With social media pages that showcase photographic evidence of how fabulous life is, it’s no wonder no
one wants to reveal those warts. If we tell the truth about our less than perfect life, kids, jobs, in-laws,
we then become what we fear most…human. If you are anything other than fine, you’ve failed at this.
Whatever this is.

How’s the new baby?
“He’s perfect. A gift from God. I don’t know what we did before he/she was here. I feel complete. I was
made to nurse. Bloody nipples be damned! My baby is going to be a genius because of me.”
That’s wonderful! How are you?
“Me? I’m fine. I get to watch the sun rise and set and rise and set. I can’t remember the last time I
showered, but I’ve discovered that a baby wipe shower works great in a pinch. I’m totally fine.”

For now, I’m done with the “How are you” questions. Common sense and a little life experience prove
that you are probably not fine if you just lost a parent or a job or if you just had a baby eight days ago or
your oldest child only came home from college THREE TIMES DURING HIS FIRST SEMESTER OF COLLEGE! You are entitled to feel all those inconvenient, complicated emotions that go hand in hand with being human.
You know, the ones that are left out of our Snap Chat stories. Because even if things aren’t really “fine” now, it will be eventually. But don’t get too cocky when things are going well. And don’t say, “My kid would never…” As soon as you utter those words, little Kevin might be headed home with some shiny new
hardware on his nipple!