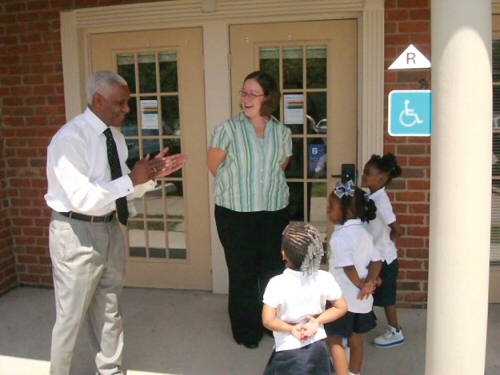 Although he may have slipped back home a couple of times to see his mother since his election, the mayor of Tennessee’s largest city was offi cially welcomed back to Lebanon in early December when he served as Grand Marshal of the city’s annual Christmas parade. A. C. Wharton, who was elected mayor of the City of Memphis in a special election on  October 15 and took offi ce 11 days later, still likes to return home to celebrate and remember his roots. After all it was in Lebanon, he often says publicly, where he learned early valuable lessons in life from elementary school teachers, attended church at the Market Street Church of Christ, and was equipped with the necessary fundamentals of a high school education to make it possible for him to attend college and after college law school.

It was also in Lebanon where Wharton learned about the virtues of a strong work ethic. He learned these lessons from his late father, A.C. Wharton Sr., who worked hard all of his life as a farmer, a custodian for several local businesses and as a small business owner, and from his mother, Mary Wharton, who still resides in Lebanon and tends an impressive summer garden.

When this African-American scholar, attorney,teacher and public servant returns home, he sees and remembers how it was being raised on Trousdale Ferry Pike on Lebanon’s east side, attending segregated public schools and living a life then much unlike what he sees today.

Wharton, 65, although awarded a scholarship to attend Tuskegee Institute’s School of Veterinary Medicine upon graduating from high school, chose instead to enter Tennessee State University in Nashville. After earning a degree in political science from TSU, Wharton was accepted at the University of Mississippi’s School of Law at Oxford and from there he launched a career in public service that has gained him signifi cant state, regional and national recognition but has never taken his mind or his heart far from his roots in Lebanon, Tennessee.

Somewhat small in size and speaking with a soft voice seasoned with a distinct southern accent, Wharton encourages, when he has the opportunity, to engage locals about the way times were or about many of his former friends, mentors, or the typical kind of refl ections that often is heard at a high school reunion. He is quick to speak of his fondness for his hometown despite a career in public life that required him to leave here at an early age and spend much of his adult years some 250 miles away in Shelby County.

Graduating with honors in 1971 from law school at Ole Miss, he became the school’s fi rst African-American professor of law, a position he held for some 25 years. His career in law and justice has included important stints with the Equal Employment Opportunity Commission in Washington, D.C., Mayor Wharton poses with Shelby County elementary
students and their teacher.

As director of Legal Services in Memphis, and as Chief Public Defender for Shelby County. Wharton is also a former member of the Cumberland University Board of Trust and a former chairman of the Tennessee Higher Education Commission. In 2002, Wharton ran for Mayor of Shelby County Government, a political race he won decisively with 62 percent of the vote. He won re-election in August 2006 with approximately 77 percent of the vote.

While mayor of Shelby County, Wharton was credited with a number of accomplishments in public safety, children’s issues, government transparency and accountability, and smart growth. In June, he announced he would run for city mayor of Memphis in a special election to replace Mayor Willie Herenton. Again, proving his ballot popularity in what’s known as the state’s “Bluff City” Wharton won the mayor’s race with 60 percent of the vote in a field of 25 candidates. He is the fourth African-American to serve as mayor of Memphis and only the second to be elected to that office. Only Herenton was elected to the post before Wharton. The mayor and his wife Ruby, who is also an attorney, have three sons.