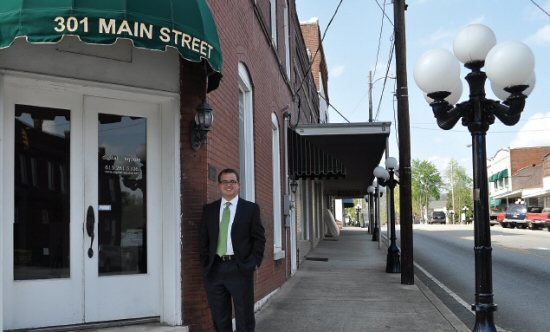 We’ve all been there. You’re at work, in desperate need to pull up a document on your computer, when …your computer implodes. You take a deep breath and restart the computer, because that is what you’ve been told to always do. Turn it back on and say a little prayer and … nothing. You shake the mouse, hit the side of the computer and still… nothing. Finally, in a primal scream you call out “what is the computer guy’s number?”

The “Computer Guy” many call these days is none other than Matt Watts. And like many “computer guys”, Matt is young enough to be your son but in these times, the younger the better in the world of computers.

“Since my first computer, a Commodore 64, I have been hooked,” notes Matt. “My Dad is a CNC programmer and always pushed me to learn more. Anytime I’d want to try something new with computers or networking, he’d make sure I had what I needed. The more I learned the more I wanted to know and to do. I find that much of the time it’s like a puzzle and I can’t stop until I have it figured out.”

Matt, a native of Carthage, had a yearning to own his own business from a young age. His family owned Carthage Foodland, which led to an early desire to be his own boss. “I saw my family put in long hours but I also saw how proud they were of the service they provided to the community. I wanted to find a way to do what they were doing, but just in a different manner.”

Later, when he met his wife, Christy, in Nashville, he convinced her to move to Carthage to follow his dream. Currently Christy is finishing up her Masters Degree and teaches Special Education at Smith County Middle School, but when she is not teaching at school or going to school herself, she is helping Matt with their computer business.

Together in 2005, Matt and Christy decided the time was right to venture into finding a place to establish their new business. Matt purchased the First National Bank building on the Carthage Square in 2005 and spent a year gutting the entire building, from the floor to the walls to the ceiling. “We replaced everything from the windows, to the electric, to plumbing, to floors and even added central heat and air. The building had been a bank since the 1900’s, and then later it was used as the Post Office and later the local barber shop. This building has a lot of history and we wanted to make our own history right in the center of town.”

The Watts converted the building to an apartment upstairs, where Matt and Christy live, and downstairs they opened up their new computer business known as – Digital Square.

Digital Square offers full service and repair of all computers, desktops, laptops, servers and even Apple products like iMacs and Mac Books. “There is no reason to head to Nashville for any of these services, we provide them right here locally and if need be, we will come to you.”

“We also have a full line of desktops and servers we sell called Thinking Machines. And after the May 2010 flood we expanded the business and started an offsite data-backup service called Memory Bank. This allows customers to always have a current, nightly back up of their information without having to deal with tapes, CDs or external hard drives. We saw a real need for this service right after the big flood, because many businesses in Carthage and Lebanon lost everything when their systems had not been backed up properly. But I know how it is, small business owners don’t always have time to remember to back up their systems. And we soon realized this was yet another service we could offer our clients.”

“My brother, Jesse, started with us at the first of this year and runs the shop part of the business. I have been focusing on on-site support for businesses including computer and network support. Quite a bit of my business is in Smith and Wilson County now. We service many lawyer and doctor’s offices as well as power utilities and city governments.”

“I enjoy helping people with computers. I try to make their lives easier and help them make more money by using their computers more efficiently.” A premise many of his clients noted was the reason they use Matt’s company. “Matt is one of those computer guy’s

who can explain things in terms anyone can understand, but more importantly, even when I don’t understand why my computer isn’t working, within minutes Matt gets it back up and running,” states Shawn McBrien, local attorney. “ And in the end, I don’t really need to know why it isn’t working, so long as Matt does.