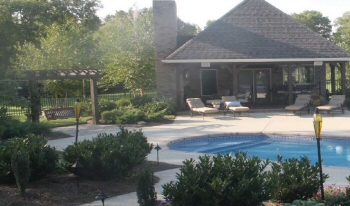 Their Home IS a Labor of Love For Jamie and Lynda Burge… Close your eyes and imagine the sound of wind bustling through the leaves on a Crate Myrtle and wood crackling in a fire pit while your children giddily roast marshmallows on embers. If you can picture this you’re imagining what I’m seeing at Lynda and Jamie Burge’s home just off Old Hickory Lake in Mt. Juliet, Tennessee. Their home rests on three acres of land in a lake community. I’m jealous, but it’s not until I hear their story of how they got where they are that I realize how much they have in
common with most of us.

Their Home IS a Labor of Love For Jamie and Lynda Burge… Close your eyes and imagine the sound of wind bustling through the leaves on a Crate Myrtle and wood crackling in a fire pit while your children giddily roast marshmallows on embers. If you can picture this you’re imagining what I’m seeing at Lynda and Jamie Burge’s home just off Old Hickory Lake in Mt. Juliet, Tennessee. Their home rests on three acres of land in a lake community. I’m jealous, but it’s not until I hear their story of how they got where they are that I realize how much they have in common with most of us.

It’s a story as old as time.

Boy meets girl. Boy and girl get married. They decide to build dream house. Boy tells girl, “There’s no way I’m living in a subdivision” to which girl replies, “I refuse to live in the middle of nowhere!”

So what they decided to do is  just about as radical as married folks can get…they compromised. Lynda explains that when they began looking for land to build on it wasn’t something that just happened. “Jamie’s a planner and because we had two completely different ideas of where we wanted to live, it took forever to find a place that would suit both of us.” When they found a new development by the name
of Spenlake, it offered Lynda the community feel while Jamie felt like he had room to roam. And it didn’t hurt that at night you could see puddles of moonlight reflecting off of Old Hickory in the backdrop.

They found the land so one might think that the hard parts over right? I mean really pick a house plan, have it built, pick some colors, throw  in a few bushes, DONE! It’s not rocket science. Turns out finding the land was the easy part. To get the full effect of this story we have to go back in time a little.

When Jamie and Lynda married Jamie was working as an IT Executive with Verizon Wireless.

Then came the next surprise. Someone approached Jamie and Lynda about selling the house they were living in. The house they had just added on to. The house that Jamie loved because of the land and the lake and the….

Well you know. It was perfect. But someone else thought it was perfect too. They decided to accept the offer and move into the first house that Jamie built and begin searching for an ideal spot for “their home.”  After their youngest “and last” child, Spencer, was born they found the property their breathtaking home sits now. They began construction and because Jamie completed a good portion of the work himself, it
took a little longer than expected.

“It was over a year. But to get the house we wanted we had to do some of the work ourselves and because Jamie knew how to do things -like trim work and other finishing tasks- it really helped cut costs.”

When construction was far enough along Lynda –a mortgage processor and newly licensed real estate agent- decided it was safe to put their  current home on the market. Since they didn’t want to be strapped with two house payments, this seemed like the best move. In less than
two weeks they had an offer on their home and two weeks after that had to move out and find temporary housing because it turns out their new home was nowhere near ready. “We moved into a two bedroom duplex with three kids for what we thought would be six weeks. That turned into 4 months! We were ready to strangle each other.” Lynda says laughing.

Their breathtaking home with its beautiful décor, meticulous landscaping and warm atmosphere is something both Lynda and Jamie take pride in. Lynda uses her own style to create a welcoming feel you will encounter when entering their Country French style home. She emphasizes that it’s more important that how a home feels than how it looks. “If you pick a style that reflects your personality everything comes together and is appealing to the eye. If you don’t stick with that you usually end up wasting time and money.

Originally their home had a little more than 3,000 square feet and housed a three car garage. Two years after moving in they added an additional 2 car garage. A year later they finished the bonus room over the two car garage. And in the spring of 2007 they took on a much bigger project when construction began on a new pool and pool house. With family always the main focus of any new project, a new pool meant more quality time outside playing with their children. While looking on as Spencer and Allie watch TV Lynda affectionately says, “You
can miss so much. Our house is made to keep all of us entertained and we get to see so much more of the kids. Everyone comes here
to play and we love it!”

When i t come s to their home Lynda and Jamie enjoy putting their finishing touch on everything they do. In fact, they enjoyed the process of creating their own backyard escape so much with their new pool, pool house and flawless landscaping they decided to expand their professional portfolio beyond building and remodeling homes to include, BACKYARD LIVING, a business that is focused on transforming a backyard into a sanctuary for the homeowner.

Lynda gains inspiration for her home in many places but her favorite area to explore new ideas is home and garden magazines. Contrary to what some people may believe, you don’t necessarily need a professional decorator to pull off your vision. “Sometimes a decorator can help if you’re stuck on a certain project. That’s what they’re paid to do so it’s a good investment to let a professional come to your home for a couple of hours to help. But, it’s not realistic for me and probably most people to pay someone to decorate your house from top to bottom. That’s why it’s nice to look where you need to for inspiration.”

Whether planning a fall garden, an exciting new meal for family and friends or a new project around the house, Lynda and Jamie are constantly looking for ways to improve their lives and enjoy their surroundings. This desire for the good life bleeds over into business where their talents and experience assist clients build dreams of their own. All of that aside, Lynda adds that you could have all the finest furnishings that money can buy but there is just one ingredient needed that makes a house a home. “Without a family to enjoy it
with, it’s just brick and mortar.”