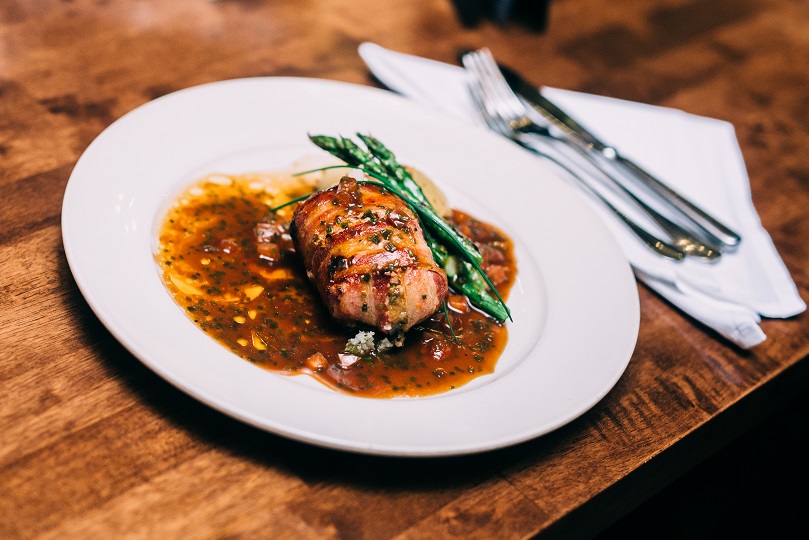 For Michelin-quality Celtic dining, look no further than… Gainesboro?

The plate comes to your table. There is a cake on it, of sorts. The cake is hot, and its first ingredient is, startlingly, cabbage. It is topped with onion straws and shrimp, and rests in a little puddle of sauce that appears to be made of garlic and magic. As you fork into the cake, you can discern traces of onion, of bacon, of garlic, of potato. You undertake the blessed job of dismantling the baffling creation, one bite at a time.

The menu says that this thing is called ‘Bubble and Squeak’. You don’t ask any questions.

Obviously any reader in the Upper Cumberland area knows what I’m talking about. One city center comes to mind, if you’re looking for a four-star meal by an internationally renowned chef who utilizes locally sourced, seasonal ingredients for his field-to-fork menu. 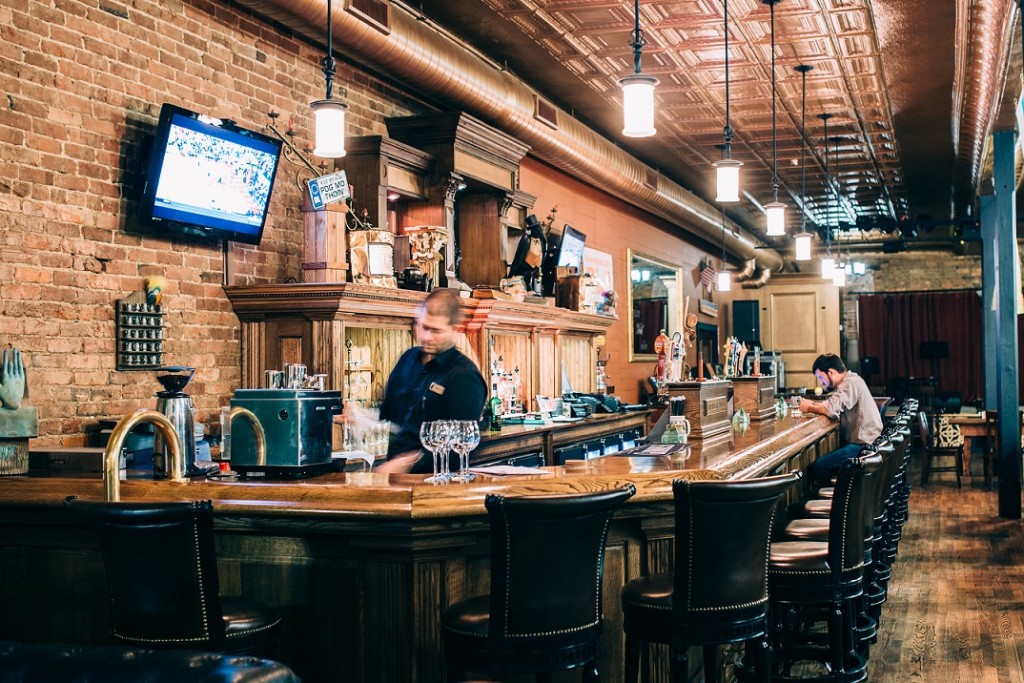 The Bull and Thistle, a Celtic restaurant overseen by Chef Barry O’Connor, draws 80% of its weekend customer base from out of county. Many of the folks you find there waiting for a table on a Saturday night have driven 1-2 hours for the privilege.

The idea originated with Diana Mandli and Loui Silvestri, business owners from Florida who landed in Tennessee almost on a whim in 2005. Loving the area, they purchased a small farm for relaxation and “getaway” purposes, never dreaming of starting another business here. But by 2009, they had purchased half a block of beautiful but neglected historic buildings on the square. Soon they had begun brainstorming to come up with a business that would be enough of a draw to start the process of reviving the town square. From many past trips to Ireland and the UK for both business and fun, they were well acquainted with the charm and comfort of a pub as a community social center.  Learning about the area they had fallen in love with, they were delighted to discover the extent of Celtic roots across Appalachia, and in the Scottish and Irish names and faces of so many living in Jackson County.  Suddenly, it all clicked.

This is how The Bull and Thistle was born.

Mandli and Silvestri had just finished renovating their old farmhouse in the Free State community and still had their hands in all kinds of entrepreneurial endeavors when they started researching a business that was totally foreign to them: restaurants. With the dream of the Bull and Thistle already in their heads, they spent months in the learning stage. Mandli bought textbooks used in Cornell’s Restaurant Management courses. Silvestri would find her lying on her back in the empty gut of the historic square building, “looking at it from a different angle” and making plans to transform the place into a little piece of Ireland.

They began researching beer and alcohol laws to find out whether Jackson County, which had been dry for many decades, could ever become wet. They presented renderings and sales projections to the county government, making the best case they could for bringing beer by the glass into the area. A few months of elbow-grease later, with essential guidance from Town Alderman John Cassetty, they were delighted to learn that all they needed was a vote from the three city commissioners. This vote passed. They put twenty beers, ales, and ciders on tap. (“Why not?” explained Silvestri.)

Then they began the process that was so very crucial to the vision of the restaurant. “We knew we needed a chef from Ireland or England,” says Mandli. “The authenticity of the building was such that our food absolutely had to rise to that same standard.”

They advertised in the culinary circles of the UK and Europe at large, looking for experience, determination, accolades, and—of course—a willingness to move. To Gainesboro.

This is where Chef Barry O’Connor found them.

Chef O’Connor has 25 years of experience in English, French, and Italian cuisine. He has extensive formal culinary training (including an additional, advanced degree in charcuterie; this means, if you were curious, that he’s an expert in butchering and curing meats). Both he and Chef Gordon Ramsey apprenticed in one of the finest restaurants in London (“I recall Gordon as quite a mild and mannerly young fellow,” say Chef). Chef Barry went on to found and run five award-winning restaurants in Ireland, one of which, the Victoria Cross Crow’s Nest, was named Ireland’s Pub of the Year in 1999.

But the crash of 2008 in Ireland “made ours look mild,” said Silvestri, and Chef O’Connor lost his restaurants in one fell swoop. He began working for other entities, as a chef and consultant. That was until Mandli and Silvestri contacted him. 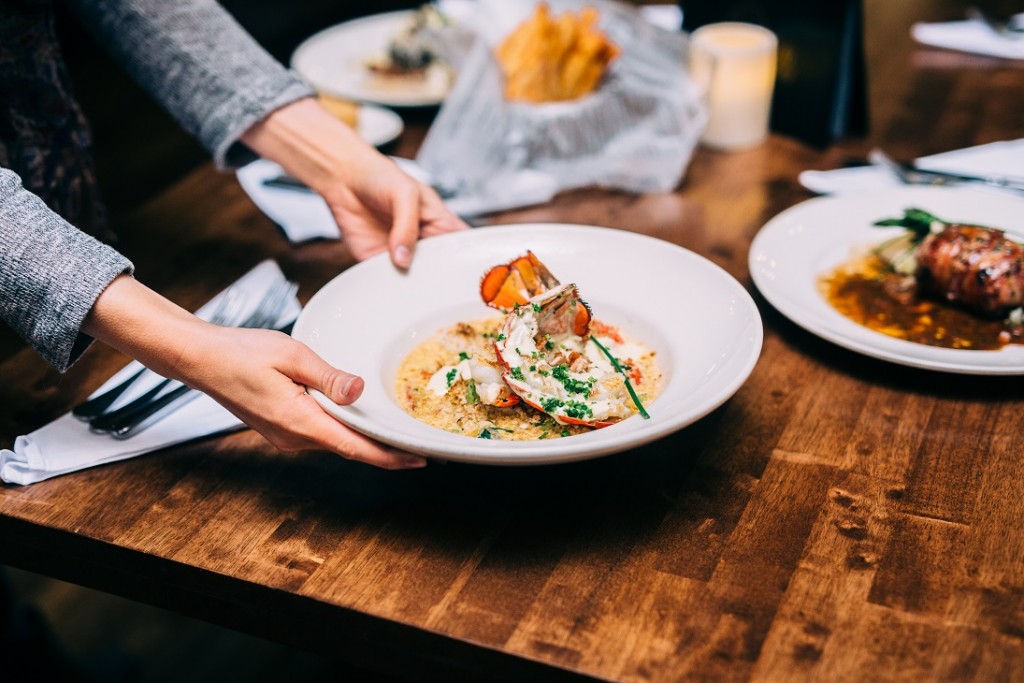 As a test, he came to Gainesboro and cooked two community meals, each a group of 14 people.  The lucky diners were friends of Mandli and Silvestri, community leaders, and local business owners.  The group sat around a billiards table converted to a dining table, and sampled every dish on the menu developed by Chef Barry and Mandli – all cooked by the Chef, working by himself in a home kitchen because at the time, there was no Pub.  (All this was early in the construction phase, and the interior of the Pub was mostly rubble.)  The food was a clear hit, although when he came out to bow and accept their praise after the meal, his colorful Irish language shocked a few of them. (“That’s just how we speak in Ireland; we punctuate everything that way,” concluded O’Connor when telling his side of the story.)  Then he had to come back to Gainesboro and do yet another meal, “for the 14 friends who didn’t get invited the first time,” laughed Silvestri.

But the Chef had always wanted to come to the U.S. and work. He described the first morning he woke up in Jackson County, and watched a next door neighbor walk by in nothing but overalls. Used to European cities and the fast pace of feeding hundreds or thousands in a day, the pace here was “something different,” he said archly. “All I’ve ever done is work in Michelin restaurants.”

So what kept him from boarding the next plane home? Well, he didn’t have a car to get him back to the airport, he quipped. Then he answered seriously: “Truly? I think the people [here] are fantastic.” He had originally agreed to come for six months and get things started, then hire a replacement. He’s now been here for three years as presiding chef. 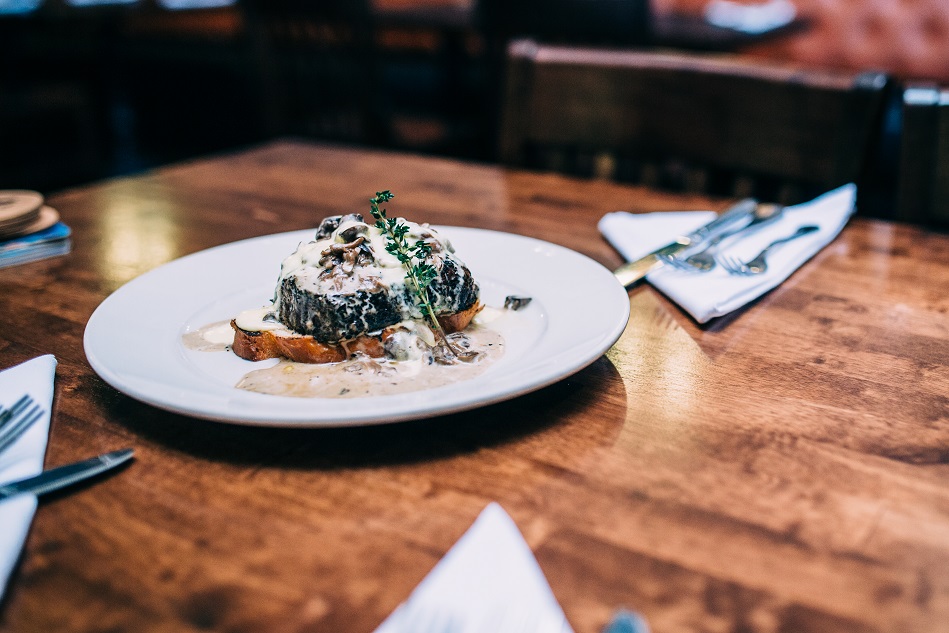 Once the Chef was selected, Mandli and Silvestri were full steam ahead to finish the construction. Almost all of the work at the Pub, inside and out, was done by local contractors, artisans, craftsmen, and tradesmen. The entirety of the bar and most of the tables in the restaurant came from a single tree dating back to George Washington’s time, at the end of its life and discovered locally. Quite a bit of the décor in the restaurant came from O’Connor’s own stash of things he salvaged from his restaurants, loaded into a single shipper and brought over. O’Connor mostly approved of what had been done in the restaurant, although when he first saw the kitchen layout, as the story goes, he let out a string of expletives and said ‘no, no, no’… then proceeded to set it all straight.

The result is that the kitchen is divided neatly into four quarters—a main cook line/grill area, an appetizer/prep area, a baking/dessert area, and a dishwashing area.  Everything is state-of-the-art, and Silvestri proudly showed off the neatness and precision with which cleanliness and food prep codes are observed by O’Connor’s staff. 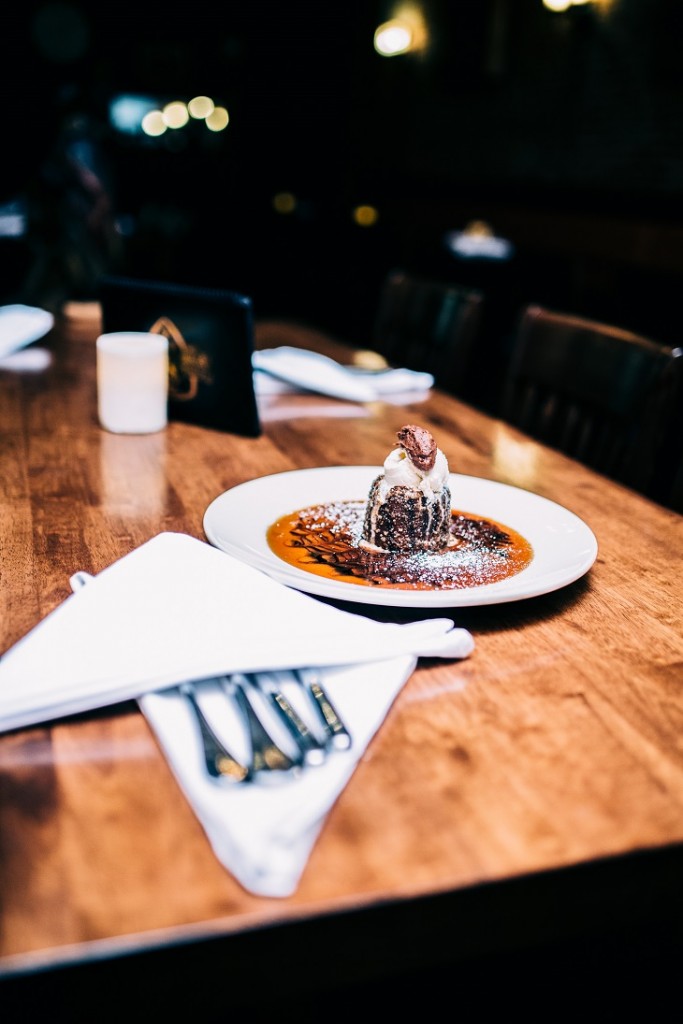 After the restaurant served its first plate—in March of 2013—they worked to get liquor and wine by the glass into the county, knowing that they couldn’t compete with city restaurants if they weren’t a one-stop-shop. They also started hiring bands for the weekends, many of them playing Irish music or Bluegrass. They most recently knocked a wall down between the Pub and its next-door neighbor, a boutique and bakery called The Vault – which was opened by Mandli and Silvestri in 2012 – so that people can shop while waiting for tables.

Passionate about the local economy, they’ve been regularly in talks with local leaders to see about bringing a larger vision to local development. Silvestri listed five major things he sees as vital to further growth: overnight accommodations such as B&Bs and boutique hotels, other quality restaurants, other entertainment (movie theaters, bowling alleys, venues, etc.), public or private transportation from major cities, and community beautification.

Chef O’Connor pours all his past experience into the menu, which changes from season to season to incorporate local ingredients at their peak times. Although most of the offerings come out of the United Kingdom, there are some Italian and French elements, and seafood features heavily (Chef recommends that seafood be served rare for full flavor). At the same table, you can get Bangers and Mash (homemade sausage glazed with onion and Guinness gravy served on a bed of colcannon), baked Maine Oysters (stuffed with bacon, crab, shrimp and garlic butter gratin and served on a wood platter), or Cashel Leeks and Walnut Pasta (Italian strozzapreti pasta with leeks, spinach, asparagus and wild mushrooms cooked in a light walnut and Cashel blue cheese sabayon).

Chef O’Connor sees to it that bread and other goods are made fresh baked on the premises, and these can be purchased in the mornings at The Vault next to the restaurant. He is also developing a line of cured meat to be sold at The Vault (presumably so that the rest of us can get a taste of what charcuterie means). 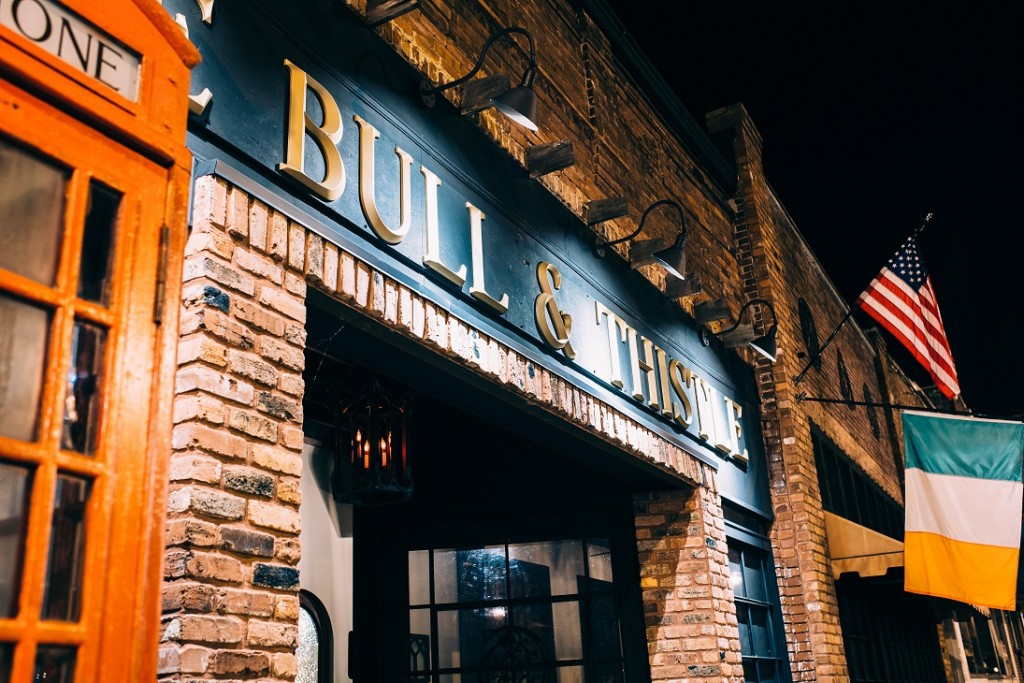 The restaurant is now three years young. I asked myself, while politely groaning over a plate of Pork Tenderloin Le Luibheanna—will this place be in business next year? Three years from now?

In answer to this question, Silvestri directed my attention to the weekends—come on a Friday, Saturday, or Sunday night, he said, and you’d better have a reservation. Wait times can get over an hour. He also mentioned that the restaurant is currently self-sustaining—on schedule with their original business plan.

“People still call us crazy when they hear about us for the first time,” he said. “But we’re business people. We know what this takes. We know what we’re doing.”

The next move, though, is to deliver a lunch menu that draws local people from places immediately surrounding the restaurant. People are willing to drive an hour to spend the evening with them on a weekend, he said, but now it’s time to focus on their daytime traffic of people from Smith, Trousdale, Wilson, Putnam… and yes, Jackson County.

“This is our town,” he said, looking at Mandli, who nodded. “We care about what happens to it.”