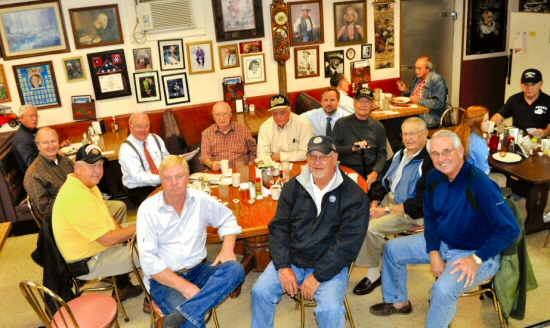 Frankie’s Cafe morning breakfast crew consists of Wayne Johnson, Bob Rochelle, J.T. Robinson, Bob Harmon, Robert Dedman, Bill Bentley, Mac McCluskey, Bill Oldham, Rufus Page and Wayne Driver. (Not pictured are Tommy Knowles, Roy Vaden, Jay White and Morris Ferguson) The Lebanon guys like to give Rufus Page a hard time because he resides in Mt. Juliet…. also known as the other side of the “Berlin wall” a/k/a Highway 109. Bob Rochelle and Robert Dedman are the longest running members of the group while Bill Bentley started coming about a year ago. Bob Rochelle and Morris Ferguson are known as the main instigators in this crowd.

Growing up in Watertown, I would ride my bike from Neal Road down to the Snow White on Sparta Pike. Back then, Kenneth Morgan owned Snow White and he was known for having the best “Ken” burgers this side of Lebanon. My older sisters, Stacey and Mallorie both worked at Snow White and they’d have to get up at the crack of dawn each Saturday to make their morning shifts. That’s because breakfast was served early…way early. And if you happened to wander in on any early morning, you’d find several local men enjoying a steaming cup of coffee with some good ole’ biscuits and gravy…solving all of the world’s problems. Being only ten years old at the time, I didn’t quite understand the importance of what I was witnessing…but that would soon come.

Cut to 12 years later and I found myself in Memphis, Tennessee as a broke and struggling law student. My only break back then, was dating Angel, whose parents owned a restaurant, which meant every once in a while I would score a free breakfast or lunch. Their restaurant, “George & David’s” was featured in the movie, The Firm, right near the end, when Tom Cruise is being chased by the bad guys. (As a side note, Angel’s Mom met Tom Cruise and to this day, sings his praises as one of the nicest people she ever met.)

Before Tom Cruise came along though, George & David’s was already well-known in town. Elvis Presley would perform in the back, before he was famous, and in the front, you could find some of the most prominent local lawyers and Judges. In the heart of downtown Memphis, by the State and Federal courthouses, the restaurant kept a steady stream of customers all day long.