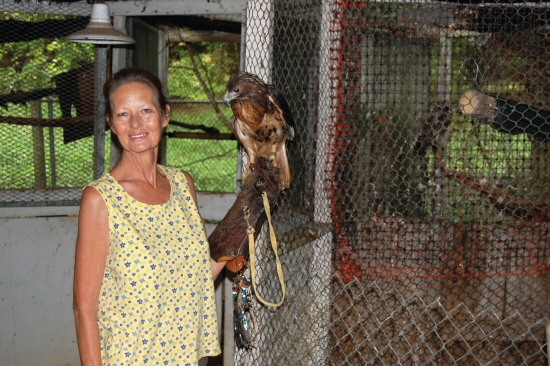 For 30 years Marty Rush has saved the day for hawks, owls, vultures and other wild creatures.

Story and photos by KEN BECK

Here comes one of my boys,” says Marty Rush, as a black vulture alights on the peak of her roof. “He comes here every day. ‘Hi, buddy.’ I love my boys.” A few seconds later, a second vulture joins the first atop the house which stands within the sound of Interstate 40 and less than two miles from Providence Marketplace. (Rush was here first.)

“I’m an ordinary backyard rehabber just trying to help wildlife,” says Rush, 64, but this redeemer to wounded birds of prey is so much more.

For more than 30 years the Birdwoman of Mt. Juliet has taken in hundreds of injured, sick or orphaned winged creatures, nursed many
back to health and released them to the sky. As for those whose can no longer fly, many of them have become part of her menagerie.

Over the decades, Rush’s Wildlife Rescue and Rehabilitation Center has served as hospital and home to hawks, owls, vultures, falcons and crows.

“It’s in my own backyard, but most people don’t know I’m here until they bring me something,” said Rush, who frequently shows off her birdies as she educates people about American wildlife. (Currently, she is not taking in new animals.)

“I have gotten to a million people through speaking at schools, churches and to Scouts. I set up at the Wilson County Fair, the Lawn and Garden Show and the Tennessee Walking Horse Celebration.”

Among those grounded permanently, her wards include two great-horned owls (Catherine and Jack), a barred owl (Tommy), two red-tailed hawks (Audrey and Harry, a 14-year-old black vulture (Andy), a turkey vulture (Leo) and a crippled crow named Waldo. Her favorite may be Audrey, 21, a hawk with a missing wing. “She’s my girl,“ said Rush.

Almost all of the birds live in cages in the backyard, but inside the house are two Siberian chipmunks (refugees from Texas) and 10 housecats, while Tardy, a red-eared slider turtle, makes his home in a container on the front porch.

The front yard is a sprawling oasis gone wild with bunches of flowers and bushes, small pools of water and lots of trees. The backyard contains dozens of small cages and carriers that have been well used. But the birds occupy solo apartments in large wire cages with tree limbs stretched across each for natural perches. The largest structure, called the compound, is somewhat octagonshaped with a central hallway and big, airy cages that contain the three hawks and two owls.

Rush goes through her daily chores of feeding them, checking their water bowls and raking out their cages. The menu normally features rats, mice and fryers, but occasionally hunter pals bring over deer meat.

The caretaker refers to Andy, the black vulture, as “Our little garbage man. The vultures are playful. He likes to untie my shoes. “I’ve had at least a dozen vultures back here at one time. Word gets around. It’s a free meal, but I love black vultures so much,” said Rush, especially the free-flying tribe that returns frequently to their old home place.

Audrey, the red-tailed hawk, is the menagerie’s celebrity of sorts. She was featured in a Carrie Underwood music video.

Rush can only touch the feet of the hawks, but as for the crow and black vultures, well, they love to have their heads rubbed, and she obliges often. Rush confesses that she has many scars on her hands from bites. Her homemade zoo has never been strictly for the birds. She has nurtured squirrels, rabbits, red foxes, raccoons and snakes, among other creatures great and small.

“I enjoy all the little animals. Possums are my favorites,” she says. “I love their personality. I had Mr. Ed and Wilbur for two years. They were the sweetest, fattest little things. Possums are so misunderstood. People think they’re ugly and stupid, and they’re not.”

How do these animals find their way to Rush’s tender, loving hands?

“People call me because I’ve been doing this so long: veterinarians, police officers and the TWRA (Tennessee Wildlife Resources Agency),” said Rush, who has an education permit from the latter. To be qualified by the TWRA to rehab birds of prey, a person must have 200 hours of documented experience with a permitted rehabilitator or be a licensed veterinarian or a vet tech with one year of full-time experience. There are approximately 60 raptor rehab centers in the state and only one in Wilson County.

“Marty specializes in raptors and has an education permit for raptors and is one of the best raptor permiteees we have in the state,” said TWRA Captive Wildlife Coordinator Walter Cook.

“Wildlife needs more help now than ever,” says Rush. “These animals have lost their habitats due to all the building and development. Loss of habitat is major right now.”

While her daughter, Carrie, and husband, Allen, a volunteer by marriage, help Rush with transporting the animals for presentations, she has had numerous local children assist her in the past.

“There are a lot of kids that helped me over the years, and many of them have gone on to be vet techs and a couple became veterinarians.”

Mt. Juliet native Beth Morgan, now a mother with two children, began helping Rush at the age of 13 and continues to serve as her back-up when Rush must be away.

“Not everybody gets to see them up close and watch,” said Morgan. “If she has to go out of town, I know how to handle them. I love to nurture things. It’s a good outlet for my mommy instinct. The babies are always fun to feed—all kinds of babies.” “She’s my lifesaver,” says Rush of Morgan, “for a lot of reasons.”

Also at the beck and call for Rush are veterinarians Mike Harris of Mt. Juliet and Lebanon’s Kevin Brummett and Perry Harmon.

“I’ve known Marty for 15 years or so. I never know what to expect when she calls,” said Harmon, who operates Tennessee Veterinary Care. “It could be an injured bird, a sick cat or a groundhog with a hernia. It’s always a surprise.

“Marty takes care of various birds of prey that have been injured or otherwise ‘fallen on hard times.’ She does all the day-to-day medical treatment and feeding and general husbandry of the birds. I don’t know how she has the time. but she does a wonderful job. She’s also very determined when she tries to save one. She doesn’t give up easily.

“I think her work is important, because without her many of these magnificent birds would perish. As a rehabber, she not only saves and treats the sick and injured ones but also displays these birds for the purpose of educating the public about wildlife.

“Over the years, Marty and I have fixed many a broken wing, a slew of broken legs, sutured various wounds, removed irreparably injured eyes, and on several, sad occasions, euthanized the ones that were beyond help. Fortunately, Marty’s also quite adept at being my surgical assistant when pressed into service,” said the veterinarian.

For Rush, her love affair with animals began as a youngster. “I grew up in the country near Oklahoma City and loved animals of all kinds, “ said Rush, who has been married to husband Allen for 45 years. The couple has lived in Mt. Juliet for almost 40 years. She worked as a secretary in the music business for a few years and was a volunteer at Cheekwood in Nashville, while he was a songwriter and studio engineer.

“Kevin had some big pens in his yard on Mt. Juliet Road. I saw the cages in the yard with the hawks and owls and bald eagles. I was concerned, and so I called the TWRA and heard the story,” said Rush, who then became a valuable volunteer in the program.

“Marty became one of the main people in the whole organization,” said Schutt. “She loves animals completely, and, without a doubt, she is an animal nut but has a heart of gold and would do anything to help an animal. She’s always put the animals first. There are not many people like Marty around.”

“I learned to catch eagles (in their cages) to take to the vet. There was nothing I wouldn’t do to help the animals,” said Rush. “I fed, cleaned and showed them.”

When Schutt moved on in 1988 to run Grassmere (which evolved into the Nashville Zoo) as director of operations, Rush moved the birds to her house. Schutt and John Stokes (now director of Save Our American Raptors in Georgia) served as Rush’s mentors and also introduced her to what was to be a major mission in her life.

“The most wonderful thing God ever let me do was work on the eagle restoration in Tennessee, mostly at Reelfoot Lake. That was the most incredible privilege that I ever had. So now we have bald eagles nesting in Middle Tennessee.”

The eagle restoration project in Tennessee began in 1981. Teams of tree climbers took young eagles out of their nests in Alaska, and the birds were flown to Tennessee. The 6-week-old eaglets came two to a hack box (a large cage with a nest built from limbs.)

For three years or so, Rush would travel to Reelfoot Lake and stay days at a time to feed and study the birds. The project was overseen by the TWRA and the U.S. Fish and Wildlife Service.

“We had a big tree house 80 feet up in a tree back at Reelfoot. We’d observe them from morning until night. We write down everything they’d do,” Rush said. The birds were released at about 12 weeks of age at several sites across the state. “They released the birds in different areas. Supposedly wherever they learn to fly, they will come back within a 50-mile radius to take up permanent residence,” said Rush. “One of the eagles we released winded up across Interstate 40 at a friend’s house.”

Since the early 1980s, about 300 bald eaglets have been released in Tennessee, much to Rush’s pure joy. She is not allowed to keep eagles at her refuge due to regulations, but she continues to care for other raptors and small critters.

“It takes so much dedication and ability to do what is called for in helping injured animals. I cut up rats and mice into bite-sized pieces. It doesn’t bother me at all. I do whatever it takes, although it can be disgusting at times.

“It’s hard to explain. I’ve done it for so long. I don’t know what I did before this. I had a life,” said the Birdwoman of Mt. Juliet, who has made life worth living again for scores of innocent creatures that have been touched by her healing hands.

Those interested in having Marty Rush show her birds and make a wildlife presentation to their school, group or organization may contact her at 758-5231. If you wish to make a donation to the nonprofit organization, write Rush at 324 Belinda Parkway, Mt. Juliet, TN 37126. At this time, she is not taking in new animals.