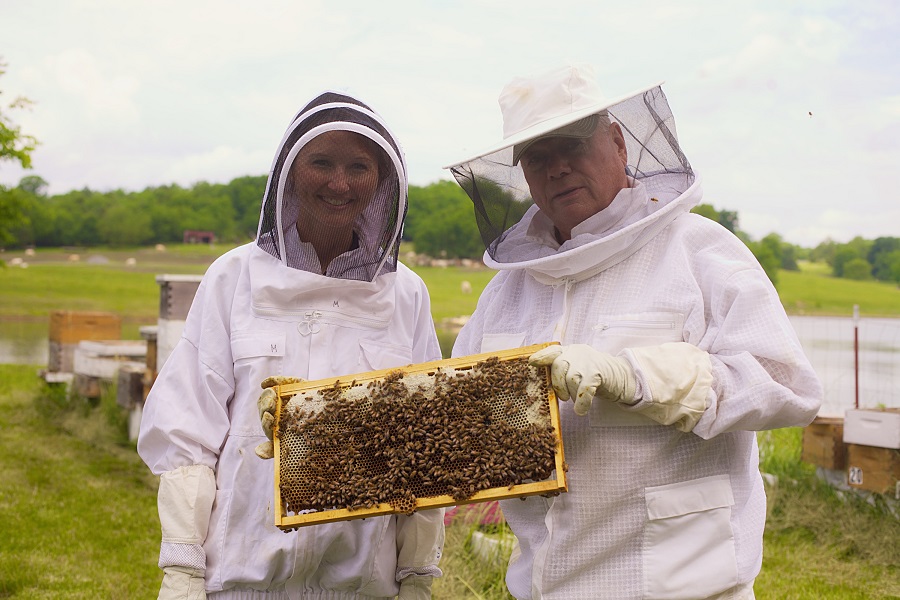 Wilson County beekeepers pass along the art to another generation

They don’t have Mr. T with them, but they’ve got a few other memorable characters. They aren’t ex-military. They aren’t really interested in forming weaponry out of old car parts, but they have a passion for one of the most important recycling processes that nature has to offer.

The Bee Team is made up of five individuals—Jerry McFarland, Mike Belcher, Jim Murff, Danielle Druid, and W.T. Nolan. Not only are they beekeepers and honey producers in their own right, but together, they’re on a two-fold mission: 1) Educate locals about the importance of the honeybee 2) Do their part to help support the pollination process. 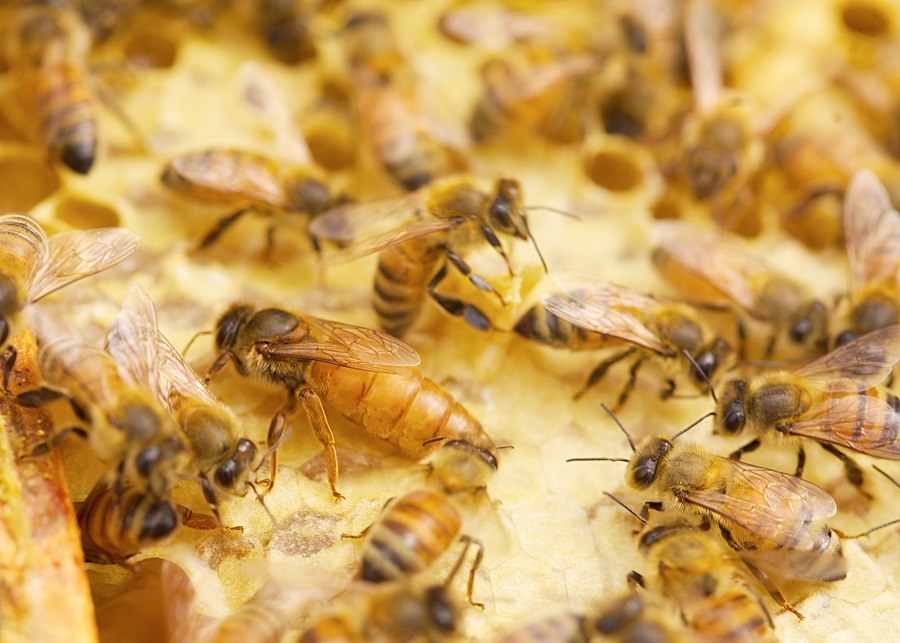 The five of them serve as adjunct teachers, taking turns leading a class on beekeeping one day a week. They work with Sarah Prater, Agricultural Education teacher at Wilson Central High School. For one day of every week, semester in and semester out, she allows them to descend on her classroom, getting a generation of high school students up to speed on the importance of the honey bee.

They keep bees on school property as well, and in a corner of the classroom, there are lockers with full sets of beekeeping gear: hats and veils, suits, and gloves. In May, June, and July, actual bee work is being done by supervised students, and honey is collected and sold by the agriculture program—much like the thousands of plants sold from the school greenhouse each year.

“It’s a cooperative,” says Jim Murff, with class time just about to begin. “Mike Belcher sort of heads it up. He’s the professor, we all take turns, and just say ‘who’s going to take the lead today?’ And then the others will just add little things here and there from their experience.”

“Jerry McFarland is the one that got it all started [with the school],” says Belcher of the Wilson County Commissioner and bee enthusiast. “He met with the school superintendent, who is another beekeeper, and they talked it over and had the idea. He’s the one who pursued it with the school board and got the funds going. And we ordered the equipment and got the bees, and it’s been going ever since. That’s been least three years ago.”

Today, W.T. Nolen gets up and starts talking about the life cycle of the honey bee.  He describes the process of honey making bees regurgitating pollen.

“Don’t make that face,” he tells the teens, who are groaning. “We’re going to practice this in a minute—I got Oreos back there.” The kids laugh.

Belcher later comments on the real reason why these men are so passionate about bees. “It’s all about pollination,” he says. “Hey, if you don’t learn about pollination, you better learn to eat about three vegetables—that’s all you’re going to get. You’ll get corn, and that’s about it.” 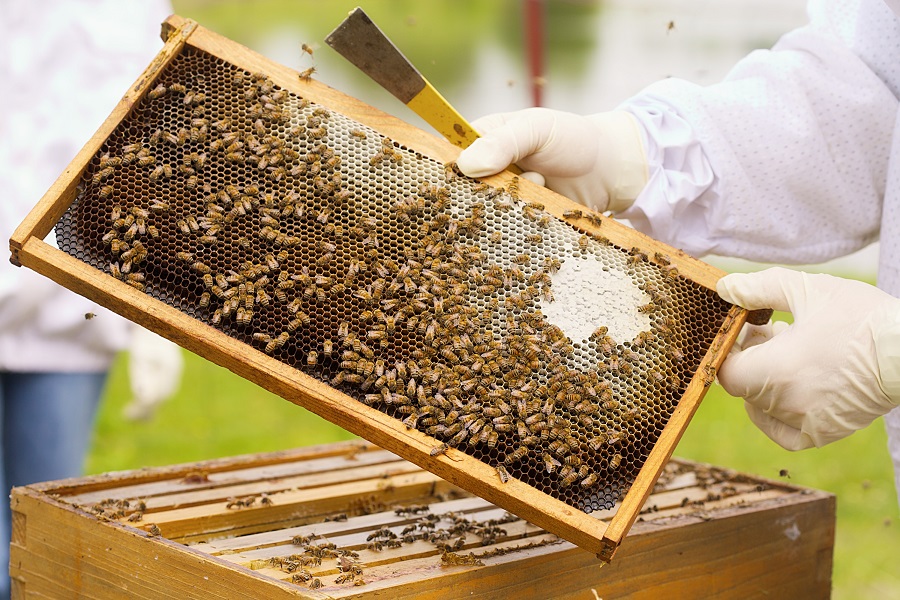 produced in the U.S. in a given year. Bees are the only ones who can do it. Moreover, they are no longer able to do it alone.

“Bees have to be kept today, because they can’t survive on their own,” says Nolen. “What with diseases, and pesticides, and GMOs, they just die out there.”

Some beekeepers have trailers of beehives, which they rent or sell to farmers. The hives are wheeled into the fields that need pollination, and left to do their work—calculations can be done to determine how many bees are needed to pollinate the requisite number of plants.

Belcher himself keeps about 50-60 hives, each housing some 20,000-50,000 bees.  He also raises and sells queens locally. Queens are the ones who lay all the eggs, so they’re vital to the survival of a hive. Moreover, Belcher explains, they lay more eggs when they’re young than when they’re old—so it’s a good idea to re-queen a hive every two years or so.

He raises queens by simply feeding extra royal jelly to a young bee in early life—royal jelly is the stuff they’re all fed from the time they are young, but give one of them super doses, and it becomes a super bee. A queen bee.

“You can make a million dollars beekeeping—if you start with two million,” jokes Nolen, an 86-year-old who only got into beekeeping after his retirement. “Beekeeping is a neat thing—a colony just decides what it wants to do. If a queen dies, they re-queen; if they get too big, they’ll split. Nobody really knows how they decide it, but they decide it. 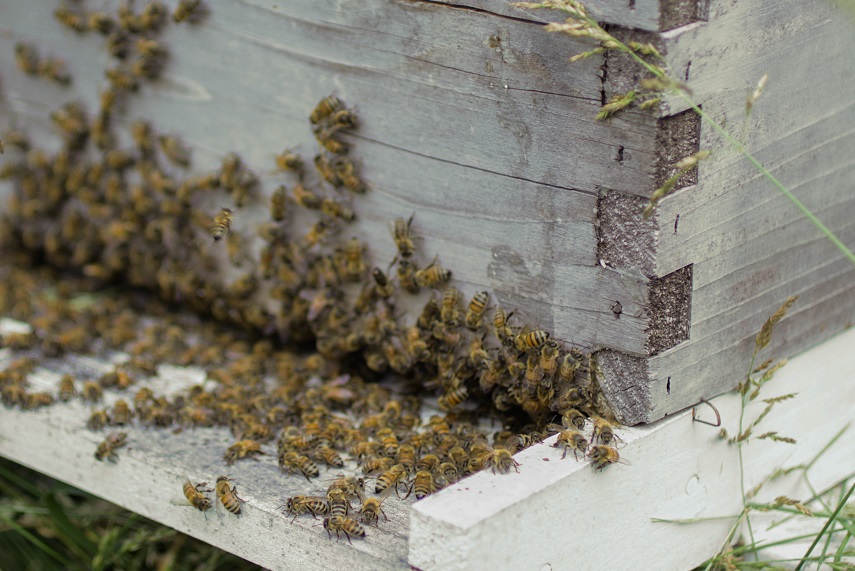 “Have you ever heard of the waggle dance? So you have all these bees in a hive. And a bee goes out and finds a source of pollen, nectar, sugar-water, whatever. And they’ll go back to the hive and do a figure-eight dance. So studies have shown that part of the dance is about what direction the source is, and how far it is to it, and another part is about how large the source is. So they’re just amazing creatures.

“Bees have been around since time immemorial. People have found honey at the base of pyramids, and it’s still edible. Honey doesn’t go bad, if it’s properly cured.”

“Honey is anti-bacterial,” chimes in Murff. “Bacteria can’t live in honey, so if you have a cut, you can put honey on it.”

“Another thing,” says Belcher. “You don’t give honey to a child younger than a year. It’s because the enzymes in their system have not developed to the point that they can digest it properly.”

You can guess, listening to them, just how the Bee Team operates—under a shared and genuine love of bees.

And they’re not alone. Although theirs was the first beekeeping class offered to high school students, they mentioned that White House has started one. And there are currently 267 members in the Wilson County Beekeepers Association—including our Bee Team, of course.

To support the Bee Team, honey can be purchased from the Wilson Central High School Agriculture Program or from their own brand, Possum Town Bees all year round. Just email Sarah Prater at praters@wcschools.edu or call 615-453-4600 ext 3069.