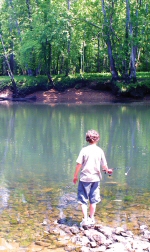 FUN ON THE WATER DOESN'T HAVE TO BE A WORLD AWAY

Summer is here, and with it, the hot and humid temperatures that come with the harsh southern season. It’s a time for travel and vacations, but with the economic downturn felt across the nation, coupled with high gas and transportation costs, Middle Tennessee families may find a trip to the sun and surf of the Atlantic or Gulf Coasts out of their reach. Fun in the sun doesn’t have to be crossed off your family’s summer plans. Fact is, Middle Tennessee has some wonderful resources to take advantage of, and a week or more on the water can be only a few minutes and a few miles away.

Center Hill Lake has been a prime destination for Middle Tennessee boaters, anglers, and tourists for over 60 years. Located mainly in DeKalb County, the reservoir also borders parts of White and Warren Counties, with easy access from Putnam County. The deep clear waters, coupled with the mountainous terrain and mainly unspoiled shoreline, Center Hill Lake boasts some of the most beautiful scenery in the region.

“It really is a beautiful lake,” said DeKalb County Mayor, Mike Foster. “We have over three-million visitors each year, mostly to the lake and the surrounding parks. It’s close to places like Nashville and Murfreesboro, just an hour away, and it has everything you need to just get away.”

The U.S. Army Corps of Engineers completed the construction of Center Hill Dam on the Caney Fork River in 1948. The project served

two main purposes: the cheap production of electricity and flood control. A series of dams was constructed in the area to help to control river flooding around towns like Carthage, and eventually along the Cumberland River and cities like Nashville. Center Hill Dam recently stored water to assist with historical flooding on the lower Ohio and Mississippi Rivers. The dam has three 45,000kw water powered turbines that can generate enough electricity to power a city of approximately 125,000 people.

The concrete gravity and earth-filled dam is 260 feet tall with eight gates that are each 50-foot wide. Its overall length is approximately 3,950 feet with the concrete section measuring 1,790 feet in length and containing 993,800 cubic yards of concrete. The earthen terraced portion of the dam is 2,160 feet in length containing 2,541,000 cubic feet of rock and earth.

The resulting lake flooded several small communities and thousands of acres of land previously devoted to agriculture. The 64-mile long reservoir covers an area of 18,220 acres, with a storage capacity of 762,000-acre feet of water. The lake has approximately 415 miles of shoreline and a watershed area of 2,174 square miles. The deepest point of Center Hill Lake measures 190 feet.

The construction of the dam was not without controversy. While the project aimed to provide flood control and a cheap energy source for thousands of people in Tennessee, the lake also displaced thousands from lands that had been settled since the State had been formed. Homes, churches, cemeteries and whole communities were forced by eminent domain to relocate. Once rich and fertile bottomlands were forever lost to the name of progress.

Historic archaeological sites were also lost as the waters covered the region. Though some minor surveys of ancient Native American settlements were conducted before the construction of the dam, the U.S. Government refused requests for more complete studies of the sites, and the lands were soon lost to the lake’s waters.

While flood control and electricity led to the construction of Center Hill Dam and Lake, a residual asset appeared in the area in the form of tourism. The natural beauty of the area, along with the newly developed waters, made Center Hill Lake a prime destination for hunters, fishermen, campers, hikers and recreational boaters.

“During the summer there are isolated coves where people can just sit and relax, enjoy open waters for skiing and jet-skiing, or deep water for fishing,” said Mayor Foster. “There are swimming areas with sandy beaches, beautiful water falls and very nice campgrounds available. We have houseboat rentals, cabin rentals, chalets, and they are even close to some wonderful golf courses, Riverwatch and Smithville Golf Course.”

Foster continued, “Even during the cold months visitors continue to make their way to Center Hill Lake. Some people come just to see the beauty of the fall colors. Others take advantage of the fishing that is great all year long. The fish and wildlife seen on the lake are outstanding, and the water quality of Center Hill makes it one of the best lakes in the State.”

The Tennessee Wildlife Resources Agency maintains the fishing resources of the lake and dam areas. The area downstream of Center Hill Dam is annually stocked with rainbow, brown and brook trout making it one of the best trout rivers in the State. The lake is known for an abundance of smallmouth bass, largemouth bass, striped bass, catfish, bluegill, walleye, paddlefi sh, spotted bass and three types of crappie. The waters have even produced some prize-winning catches with the Tennessee State record paddlefi sh, and until only recently the State record spotted bass, weighing five pounds, eight ounces.

Boat docks and marinas also sprang up around Center Hill Lake as the area’s tourism appeal grew. Center Hill Marina, Cookeville Boat Dock, Edgar Evins Marina, Four Seasons Marina, Hidden Harbor Marina, Horseshoe Bend Marina, Hurricane Marina, Pates Ford Marina and Sligo Marina, all developed as the boating and fishing industry developed. The marinas offer a wide variety of services for visitors including: fuel, boat docking, electrical and water hookups, boat rentals, fishing and marine supplies and restaurants and snack bars can be found at the nine marinas located on the lake today. In recent years Center Hill Dam has been in the news for seepage problems. The dam, along with Wolf Creek Dam in Kentucky, was designated a high risk, and both have undergone massive rehabilitation projects in order to strengthen the aging structures. According to the Corps of Engineers the fi rst of several phases have been completed. “In December 2010, the first important phase of the rehabilitation, foundation grouting, was completed. In this three-year construction contract, more than 50 miles of drilling of small holes was completed in order to pump over 1.5 million gallons of grout (which is a concrete mixture) into the rock foundation to make it stronger. Water moving through the foundation has been decreased and the dam is safer now than before the work was done.”

“The rehabilitation project is about 60-percent completed,” said Mayor Foster. “There is a year and a half, maybe two years, before its completion, but everyone should know that the dam is safe. Water levels are still lower than normal, but the waterways are clear and campgrounds and marinas are mostly unaffected.”

Thousands of Tennesseans are finding that fun on the water doesn’t have to mean long and expensive trips to the coastal U.S. Many are rediscovering some of the wonderful assets available in their own backyard. Center Hill Lake, and the host of parks and attractions associated with it, are waiting for you. For more information, visit DeKalb County’s new website at www.dekalbtennessee.com .