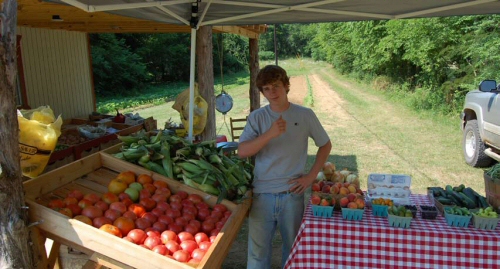 Drive west along Coles Ferry Pike and on the right side of the road about three to four miles from Lebanon, small, neat signs begin to sprout out of the ground…

Drive west along Coles Ferry Pike and on the right side of the road about three to four miles from Lebanon, small, neat signs begin to sprout out of the ground.

Pictured Above – Tomatoes are Mitchell Lester’s best sellers. Here, he stands in his tomato patch where the plants may be taller than he is.

Near the road stands a small storage shed sporting an American flag. Beneath a blue tent open to the four winds and an overhanging roof supported by cedar posts, a wide variety of colorful vegetables and fruits entice hungry motorists to slow down and check out the sight. A number of them brake gently and pull in to explore and poke the homegrown goodies and make hands-on investigations.

“Produce sells better outside. It always has,” says Lester gently as he adjusts the veggies to create better eye appeal. He speaks with the voice of authority, like a farmer who has spent decades in the field shifting dirt, planting seeds, cursing weeds and praying for the rain to come or go away.

Lester’s knowledge of turning out ripe fruit and vegetables belies his years. For this brown-haired boy with light-blue eyes is but 16. And this is his eighth summer of peddling produce by the side of the road.

At age 9 he carried five tomatoes and three squash down to the blacktop and returned to the house with his pocket jingling to the tune of $3.50. It was a good feeling. “I wouldn’t do it if I didn’t love it,” he says.

This year he planted four acres of garden on seven separate plots of ground. He grows zucchini, okra, corn, squash, potatoes, cucumbers, bell peppers, hot peppers, banana peppers and green beans among other edibles. And he has 600 tomato plants just turning their fruits into big red bursts of deliciousness.

“Tomatoes hit hard in July. That’s what everybody really wants,” says the veteran, whose best sellers are tomatoes, corn and squash. “On a good day, I can sell 100 to 150 pounds tomatoes. There’s no comparison between store bought and homegrown tomatoes.”

Lester’s tomato plants come up to his 5-foot-8 height, while his corn stalks grow higher. Today he wears blue jeans, boots and a shirt. The 2005 Z71 Chevy truck that he bought this spring is parked nearby. A sticker in the back window proclaims: “No farms, No food.”

“We had a neighbor, Lee Foutch, and he taught my dad how to garden. I’ve always enjoyed it. I just kind of took it up from there,” said Lester. “I love newly-turned up soil. I used to run around and play in it. I like the hard work of it and getting a good crop and just being outside. I enjoy outside manual labor.

“I let people come and pick when they want to,” he says referring to a green patch behind his shed where he has planted okra, tomatoes and green beans. “Little kids and moms do that most.

“The No. 1 thing is you gotta have good produce. I love the whole deal of growing it and selling it,” says the Friendship Christian High School sophomore who for the first time this year began selling some of his goods at the Lebanon Farmers Market.

All of the produce he sells at the farmers market he either grows himself or purchases from other Wilson County farmers, whereas some of the produce at his stand comes from a Mennonite farm near Scottsville, Ky.

“Mitchell’s gravitation to this is equally in the sales as it is in the farming,” says his father Kevin Lester. “I grew gardens since he was growing up, and he would help, but one day, Teresa (his mother) suggested he take a bit of what he had and see if he could sell it on the road. From the day on he was hooked and started selling more of what we had.

“Each summer he would spend more time doing that, and now he is attempting to be a supplier of fresh produce to people in this area. If he doesn’t have it, he will supplement with Mennonite produce. That way he can keep a good supply going throughout the summer.

“Even though he loves the farming and agriculture, what he gets very excited about and loves is the selling and meeting the public,” Kevin said. “What strikes people is that he gravitated so naturally and that he didn’t even know my granddad was a produce vendor.”

In 1930, Mitchell’s great-grandfather, Kenneth O. Lester Sr. of Alexandria in DeKalb County, bought out a man who had a produce route. “He bought his 1½-ton truck for $36 and bought his license and good will for $250,” said Kevin, of one of the roots that eventually evolved into PFG, or Performance Food Group.

“He would go to Nashville to buy produce from the markets and then go out to mom-and-pop grocery stores and peddle to them. He had a route and built up a produce business. He moved the business to Nashville and worked from there for a time and then joined with a brother and they called it Lester Brothers. They split up. His brother went to Clarksville and he came to Lebanon and called it the Kenneth O. Lester Co. from that point on,” said Kevin, whose late father Kenneth O. Lester Jr. joined the business in the 1950s and pioneered frozen foods for the company.

They later added institutional items such as canned goods and supplies, and in the 1960s went from retail to food service serving the away-from-home eating industry like restaurants, school cafeterias and hospitals.

So, while Mitchell is beginning to uncover family history, his biggest concern remains the 40 or so cars that stop each day at his stand on Coles Ferry Pike.

In the heart of summer his business is open 11 a.m.-6 p.m. Monday, Tuesday, Thursday and Friday and 9 a.m.-4 p.m. Saturday. His prices change during the season, depending on the availability of produce.

This afternoon Pam Sampson pulls in and buys a bag or two of vegetables. “I’ve been looking for his vegetables. They’re always the best,” she says.

Michelle Robertson and her young sons James and Noah stop by for 10 minutes and flip through the fruit and vegetables before filling three or four bags and playing with the Taylor Scales that Mitchell uses to weigh produce. The boys plop a watermelon on the scales to see how much it weighs.

“We like that it’s fresh produce and homegrown. We like to see a young person working hard,” said Michelle.

Mitchell figures he works about 50 hours a week at farming and dealing with the public in the summer months. But the hard work starts with turning the soil in the fall.

“I tilled my first ground this year in March. In early spring, I plant turnip greens, collard greens, snow peas, green onions, mustard and spinach. We plant everything by hand,” said Mitchell, who gets helping hands from his father, his brother Kason and some of his  friends. He pays them all but his dad.

This summer he has been setting up several days a week at the farmers market, so his brother’s girlfriend, Rachel Pardue, runs the stand beside the road when he is absent.

It’s not all work and no play for the urban farm boy who plans to earn an agriculture degree in college. He enjoys swimming, fishing and hunting with his school chums, breaks and rides horses and runs on the FCS cross-country team.

“I couldn’t do it without my family’s help, my mom, my dad and my brother,” says the indefatigable Mitchell, who also cuts firewood in the winter.

This year he has planted a pumpkin patch so his produce stand will be open through October. He has had problems this year due to deer and raccoons gobbling up his corn crop. “You pretty much plant enough to share with them,” he says of the hungry critters.

For a boy who relishes getting his hands in the dirt as much as he loves reaping the harvest of his labors, there’s one more reward besides the income and the feeling of a job well done.

“I love eating all of it,” says the teen who is most partial to tomatoes, corn and fried squash, especially when his grandmother (Fran Martin) cooks it.