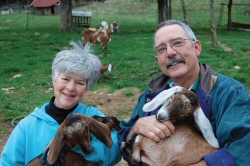 Photos and Story by Ken Beck

The way Pat Ryan sees it, Salem Farms is a nursery, a goat farm, a dairy and a soap factory.

He and wife Katie moved into the 1918 farmhouse on the old Armstrong Arnold place near Norene 7½ years ago. First, they tried raising Boer goats for meat, but in October of 2010 they switched their herd to Nubians for milk.

The way Pat Ryan sees it, Salem Farms is a nursery, a goat farm, a dairy and a soap factory.

He and wife Katie moved into the 1918 farmhouse on the old Armstrong Arnold place near Norene 7½ years ago. First, they tried raising Boer goats for meat, but in October of 2010 they switched their herd to Nubians for milk. Today, they have a thriving business producing homemade, handmade, all-natural goat’s milk soap.

“Our bars aren’t pretty. They’re functional. We want something that people are gonna use,” said Pat of their five varieties of soap. “We are the only soap makers that we know of that make only unscented bars,” Katie chimed in. “This is the only soap we use. Isn’t my skin gorgeous?” joked Pat.

Kidding aside, the Ryan’s seem to have found their economic salvation, a healthier lifestyle and a second family of children all in a goat herd of bucks, does and kids.

“If I’m having a rotten day, I just come out here and be with my babies. They’re all my babies,” said Katie, “and it takes the place of a psychiatrist and a health club.”

The recent death of a precious doe left the Ryan’s with two orphan kids on their hands. That translates into feeding them milk from a bottle.

“The thing about bottle babies is that they get so used to human companionship, so they see people as much as their buddies as the kids. They sleep in a wad, run in a wad, play together. We’ve been there for our babies, all the way back,” Katie said, referring to being present at the birth of each kid.

“I found one kid cold and lifeless a day after he was born. I brought him into the house to warm it up and forced milk down it. Four hours later, I heard a ‘Waah!’ and he was standing, so we named him Lazarus,” recollected Pat.

Married for 14 years, the couple shares three children and three grandchildren, with another on the way. However, their Salem Farms clan includes bucks Hickory and Jethro, does Jill, Hully, Dianna, Dumplin, Grace and Jemima, and 20 kids born this spring. These adopted children are American Dairy Goat Association registered out of “very fine milky lines.” And watching guard over the herd are other family members, three Great Pyrenees: Uncle Charlie, Moonshine and Big Puppy.

Meanwhile, two other dogs, mixed breed Tex and half lab and half golden retriever Ruby, are pets.

“Nubians are gentle, very affectionate and vocal,” said Katie about her goats. “They talk a lot. For example, when you walk out to the milk barn when they are full of milk, they say, ‘Naah, naah. Hurry up. We’re ready to eat.’ They are very easy kidders (giving birth), and they’re excellent moms.”

The goat ranchers feed their herd at eight and eight most days on a special goat chow from Edward’s Feeds in Lebanon along with alfalfa hay. The creatures may get fruits on special occasions and love raisins. Milking chores also occur twice a day, normally taking about 15 minutes. The does can be milked year round, but, said Katie, “We dry them off two months prior to kidding so the nutrition goes to their babies rather than the milk bucket.”

The gestation period for these goats is five months. Does commonly give birth to triplets, while quadruplets are not uncommon. At birth a kid weighs from six to 10 pounds, but by three months they reach 50 pounds. Full grown Nubians weigh from 140 to 160 pounds, and a male can jump flat-footed over a five-foot high fence.

“When kids are about three months old, they are ready to go to new homes,” said Pat. They like to sell “mini-herds” of two does and two bucks. They fetch $275 and $175 a piece, respectively. “Goats are herd animals, and they probably will not thrive or survive if there is just one. So if people buy a goat from us, we make sure they already have one, or we make them buy two,” said Katie.

But their primary business here is transforming goat milk into soap. Katie, 63, was born in Nashville and worked as a representative in the salon industry and was a sales manager in the acceiling tiles business for years. Her father had a cattle ranch in East Texas, and her grandfather farmed in north Alabama.

Pat, 57, was born in Nashville where he worked for Reynolds Metal Company before getting into the construction and mirror business for 25 years. His grandfather ran a dairy farm near the Murfreesboro airport.

Seeking to move from Nashville to Wilson County, the Ryan’s narrowed their search to eight houses. Once Katie stepped into the dark and dingy confines of a pre-Civil War log barn on this property, she knew it must have been predestined.

“I walked into the barn. It was full of spider webs, all nasty, and I saw this little manger, and the feeling I got was that I was in Bethlehem. I thought all that barn needed was animals, and this was the place I wanted to live, just the place where God wanted us to be,” she recollected. Ahh, but what animals would they raise?