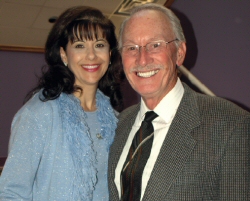 A Woman’s Story of Faith and Hope

When you meet Colleen Lee, Wilson County resident (and wife of Reverend Gordon Lee, Pastor of Lebanon’s Church of God Worship & Ministry Center), and you see her beautiful smile and healthy appearance, you would never imagine her life’s journey over the past decade. It has played out much like a country song,

“I’ve been through the Big D and I don’t mean Dallas,” (except she lived in Dallas too.) The Big D for Colleen meant divorce, followed by a downward emotional and physical tailspin, and a diagnosis of probable death, twice. Her story is one of overcoming the unexpected, unwanted circumstances that many people find themselves in, through faith, prayer, unrelenting self-determination, and the miracles of God.

Colleen Lee has always loved a challenge. She attended Bryan College, a faith-based college in Dayton, TN, continuing on to the University of TN-Chattanooga, and earned a chemistry degree. After college, she worked for Mobil Oil in Dallas, TX as a research chemist, and attended graduate classes at Southern Methodist University. After marrying, she and her husband returned to Tennessee, where she worked for Ross Gear as an analytical chemist. A Christian with strong faith, Colleen attended the Church of God for most of her adult life. When she became pregnant with her first child, she couldn’t work in the chemical environment. That led to more than 18 years as a stay-at-home Mom, working on their family farm, teaching Sunday School at church, participating in school activities, and raising three sons, Sean, Chad, and Seth. For extra spending money, she worked part-time for the Youth Emergency Shelter, tutoring troubled youth. She fell in love with these teens with unique problems and needs, and found a new “calling.” Colleen returned to college, earning a masters degree in Special Education at Tennessee State University. She eventually became an executive with the company, managing multiple youth facilities for trouble teens throughout the nation. As her career excelled, life at home was marred by her husband’s alcoholism.

“I thought I was supposed to keep our family together no matter what, “said Lee. “I didn’t realize the effect the drinking and verbal abuse was having on me or my sons,” she said.

In 2000, when her husband abruptly left, no longer wanting the responsibilities of married life, Lee said her life spun into a “downward spiral.”

“After he left and we divorced, I couldn’t eat, I didn’t sleep, and I didn’t take care myself. I pushed myself to work, to provide for my sons. I thought, ‘What’s wrong with me, that my husband would leave us?’ not realizing what the years of criticism and living with an alcoholic had done to my self esteem. I blamed myself,” Lee said.

Soon Colleen developed a multitude of health problems including fatigue and anemia, and years of missed-diagnoses and failed treatments. Finally a physician specializing in oncology and hematology diagnosed her illness; a type of leukemia, brought about by what her doctor believed was a suppressed immune system, likely stemming from excessive stress.

Through it all, Colleen said she never felt that God had abandoned her. She drew on her faith, family support, prayer, and personal resolve not to give up. But she acknowledges that “it wasn’t easy.” She scheduled her chemotherapy treatments and blood transfusions on Friday afternoons, so she could stay in bed most of the weekends, and then returned to work on Monday mornings.

“I learned with my form of leukemia, my life expectancy was about three years,” Colleen stated, “but I didn’t accept that. I agreed to chemotherapy, and I finally started investing in myself.

I developed friendships, and made a bucket list of fun things that I wanted to do. During this time, I really began growing in the Lord, too. Instead of dating, I focused on my sons and myself. My doctor couldn’t understand with the extremely low blood count I had, how I kept going. She told me not to read the negative reports about leukemia on the internet, and ignore the projections of limited life expectancy, and to keep doing whatever it was that I was doing. Somehow, it was working.”

Through it all, Colleen continued to excel in her career, and the company offered her a promotion and move to California. She accepted, moving with her youngest son who was still living at home at the time. Then, in 2005, Colleen was called back home to Lebanon when her father had a major heart attack.

“I took a 30-day leave of absence to stay with my parents when Dad had by-pass surgery,” said Colleen, “I spent days with him at the hospital.”

Little did she know how her father’s illness would figure into God’s plan, and as quickly as her life was filled with turmoil, she would soon be filled with new joy and a new life.

“Our pastor, Gordon Lee, was very close friends with my father and mother, and he came by the hospital often to visit,” she said. “Gordon had been my pastor for 26 years. It was during those visits at the hospital that we first had the opportunity to become better acquainted. His wife and our friend Myrtie had passed away the year before, and we shared our feelings of grief and loss. Later when Gordon invited me for dinner, I thought he was probably concerned for my spiritual needs. I was pretty shocked when he smiled and said, “No, I’m asking you out for a date.” It took some adjustment, but I began to look at him differently, not just as my minister but also as a friend. I accepted his invitation, thinking Gordon would be someone I could trust, never dreaming that he would eventually propose marriage,” she said.

Months later when Reverend Lee “popped the question”, Colleen said her primary concern was the leukemia. “Gordon had just gone through several years of dealing with his wife’s illness and her death,” Colleen said, “and I didn’t think it was fair to put him through the same thing again. At the time, I thought I might only have a year or so left. We both prayed about it, and Gordon was adamant that his love for me was for however long we had, and forever. He said that God spoke to his heart clearly and that the “terminally ill need love too” and that he couldn’t abandon his love for me, because of my diagnosis. I couldn’t believe that God had brought such a kind, loving, tenderhearted man into my life,” she added.

“I decided to discontinue the chemotherapy and other treatment. Gordon was concerned, but I felt if I only had one year, I wanted to it to be good. All along we believed that God was healing me. Gordon had absolute confidence in the Lord. We both put our trust in the Lord, and our church, family, and friends continued to pray. When I went to the doctor, I asked her to check my lab work. The report came back normal, and it has remained normal now for five years, with no evidence of leukemia. I also believe that sheer happiness also helped reverse it,” said Colleen smiling.

If this were a fairy tale, this story would end here, but the Lees were about to undergo yet another test of faith.

“In the summer of 2009, I was extremely tired and had trouble breathing. I had recently spent time caring for both my son, and my mom who had both been hospitalized. I blamed it on exhaustion. I thought maybe I had pneumonia. Finally, while laying in bed one night I told Gordon that I couldn’t breath, and he took me to the emergency room. We weren’t expecting what the doctors would tell us,” she said.

The cardiologist told the Lees that Colleen had congestive heart failure, with only 5-10% heart function, probably caused from a virus. Her heart was extremely enlarged.

“The prognosis was grim,” said Colleen. “They said I would be in the hospital for a very long time, and then put on a heart transplant list. I wasn’t worried. I knew that God could get me through this too, but I felt I would be a winner no matter what happened.

My concern was more for Gordon, my parents, and sons. We continued to pray. I went home four days later,” she said. Colleen and Gordon agreed with her cardiologist at St. Thomas Hospital to try medications to reverse the limited heart function, she rested at home, and they prayed and trusted God along with their church family and friends. She began to see rapid improvement, and in less than a year, her heart was functioning at near normal levels. The doctor said he just couldn’t understand it.

“My doctor was amazed. They kept taking x-rays and doing tests. He said my heart was no longer enlarged. Even if the medications improved the heart function, they couldn’t figure out how my heart could shrink back to normal size. I feel great, and I have been able to stop taking several of the medications,” Lee said.

When asked how she survived divorce, and near-fatal illness twice, Colleen is quick to respond. “Part of it is personal resolve,” she said. “It was mind over matter. I made up my mind, don’t give up, and don’t give in. Do what is necessary and what you can to help yourself. Gordon’s rocksolid faith helped me to share his absolute confidence that there is nothing that God cannot give us the grace and the strength to get through,” she said. “There were times during my illnesses when I found out my body would simply shut down, and I had to rest. I have a lot of empathy for people who are dealing with illness. It was such a blessing to me when people prayed, brought food, sent cards, and other thoughtful things to help and encourage me. Even when I felt too sick to utter a prayer, and all I could think is ‘Jesus help me,’ I knew others were there praying for me. That is part of the way God worked his healing miracles.”

Today Colleen enjoys being a busy wife, mom, grand-mom, and supports her husband’s ministry and their church. She serves as President of the Women’s Ministry at the Church of God, loves singing in the choir, and is happy to share her faith and testimony of “surviving life’s trials” with others.

“I feel my role is to use what God has brought me through, to encourage and inspire others in our congregation and our community,” said Colleen. “As I recently shared in our Sunday School class, you have to go to the depths of the ocean to find the most beautiful pearls, and it’s the darkest at night when you will see the brightest stars.”