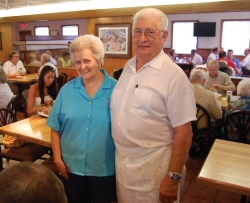 The Hodge’s cookery employs 24 including nine waitresses whose length of service at Sunset averages 20 years apiece. And as for being a real family restaurant, well, among their kinfolk who assist in the business are: son Jimmy, 51, cook; daughter Debbie, 49, payroll; son Bobby, 43, dishwasher; daughter-in law Sheila, waitress and scheduler; daughter-in-law Tammy, cook; grandson Timothy, cook; and granddaughter Wendy, waitress.

Sunset Restaurant was built in 1959 by Vestal Fox, a brother to Bob’s step-father. One of the original cooks was Bob’s brother Bill. In 1963, Bill and Bob’s mother Frances and her husband bought Sunset and operated it for four years.

“Bill kept talking about wanting to buy it but wouldn’t run it by himself. I told Bill if he would teach me to cook, we’d buy it. So he taught me to cook. I just do the cooking here and nowhere else [meaning at home],” said Bob, who has been married to Virginia for 52 years. The two met as high school students in Harlan County, Ky.

Back in the 1960s, there was barely a chain restaurant to be found in the City of Cedars. Lebanon boasted such locally owned eateries as Rose’s, Snow White, the Town House, Southland, Mr. Chicken, Jess Anderson’s BBQ place on Carthage Highway and the Round Table at the Holiday Inn, which was the only place to eat between Sunset and Interstate 40.

“We’ve expanded the dining room twice,” said Bob, about Sunset, which seats 130. “Bill Baird drove his Pontiac through the dining room window. That’s when we expanded. Coleman Walker and his wife and son were pushed out onto the floor.

“Our son Jimmy’s been helping me for 27 or 28 years. He does more cooking now than I do. But I’m just not ready to quit. I enjoy the people,” Bob said.

“I pretty much grew up here from when I was 6 years old when we moved here,” says chef Jimmy, who puts in 12 to 14 hours a day, six days a week in the kitchen. “Dad taught me how to cook, and I learned some on my own by watching. I was cutting and slicing tomatoes when I was 6.”

Does he eat here often?

“Just had me a piece of tenderloin,” he says, patting his tummy. “I’m trying to diet, so I only had one piece compared to my usual two. You don’t want a cook who won’t eat his own food. We make sure it’s good.”

Jimmy and Sheila, his wife of seven years, attended Highland Heights Elementary School together. About 12 years ago, she became a Sunset waitress. “We got back together here and have made a life together,” Jimmy says with a smile.

While the Hodge’s oldest child keeps the tasty vittles moving from kitchen to the table, Virginia’s eagle eyes make sure everything is running smoothly.

“Now I keep the books, do the bills and pay the taxes and tell everybody what to do,” she says, joking a bit. “But I’ve washed, cooked, made pies, waited tables and cleaned the bathrooms. I done it all.

“I like the people. Our girls [the waitresses] like the people, too. One has a customer who always complains about it being cold. So she will cover him up with a blanket. We’ve got a bunch of people who, if they don’t come in for three or four days, we have gone and knocked on their door to check on ’em,” said Virginia, who shares 14 grandchildren and 14 great-grandchildren with Bob.

But there are other “family” members they share as well. Cashier Shirley Ferrell has served here 28¾ years, while waitresses Becky Thomas and Jean Shutt each have been waiting Sunset tables for 27 years.

“I began as a waitress and did that 15 years,” said cashier Ferrell. “I enjoy seeing all the people.