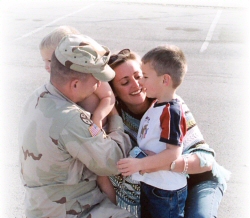 Retirement? I felt too young to be retired at only forty. But with twenty years of soldiering behind me, I was tired, and it was time for

me to go. I had been retired for only a few months when I started reflecting on those two decades that spanned my career. Having lived through four combat deployments, peacetime deployments, marriage, kids, moving, and the like, I can hardly believe time has gone by so fast. The last ten years were the craziest though; two kids, two moves, a college degree and three years away from home, overseas. That’s where the being “tired” comes from. I began looking through old photos of the different places, recalling faces, and dabbling in some regrets, but mostly I felt proud of what I had accomplished.

As I recalled those times, I began thinking about all of the work and sacrifice my wife, Cathey, has made along the way. She has always been there for me and certainly played a major role in me being able to reach my twenty-year mark. It’s really not my retirement but our retirement. It was just as much hers because of all that she has endured.

I had been an infantryman for eight years when Cathey and I married in 1998, and I immediately began officer candidate school afterwards. In 2000, our first son, Mason, was born, and a few months later I had to leave for my officer basic course. The course was four months long, and the post was eight hours away. Leaving my wife and newborn son was the last thing I wanted to do. Little did we know it was only a foreshadowing of what was to come.

After the 9-11 attacks, rumors of deployments were constantly being circulated. Two years later we got the call. I was a military police platoon leader, and my company was leaving after New Year’s Day of 2003 for Kuwait. Mason was two, and Cathey was pregnant with our second son, Sam. Once again, this is not how I wanted to be leaving home. When we said our “good-byes”, I still remember her staying strong and not crying in front of me. She was just focused on being positive and me getting back home safely. She knew I was under a lot of stress and didn’t want to add to it.

Once the invasion started, I didn’t talk to Cathey and Mason for over a month. I knew she was under a great deal of stress and concerned about me. When a mother has a toddler and another one on the way, the last thing she needs to worry about is whether or not Dad is coming home. When Mason would ask her where I was, she would answer “at work” and that I would be home soon. After the ground war ended we set up our base camp and tried to establish a regular routine. Cathey mailed me a cell phone so I could call for Sam’s birth. I can still remember sitting on my cot with the tent flaps closed, in 130-degree heat, so no one could see me cry. I did hear Sam’s first cry though. I was grateful for that. I felt so bad for everything she was going through; recovering from giving birth, dealing with a newborn and raising a toddler at the same time, without me being by her side to support her and help her during this time.

I received two weeks of leave in August and after paying $1,400 for a plane ticket, I was on my way home. My leave time was great but very short, and I wouldn’t see home again until Valentine’s Day of 2004. It was definitely the best homecoming ever.

A little over a year later, I was preparing to go back to Iraq as individual replacement, joining up with Tennessee’s 278th Regimental Combat Team. Right before I left, we had moved from Bellevue to Lebanon where we currently live. Cathey left her teaching job in Kingston Springs for the chance to live on a farm near Tuckers Crossroads. It was an old farmhouse that needed quite a bit of work, but it was perfect.

Although this deployment was shorter, she gave everything she had to keep things moving along. In between teaching jobs and living in an apartment in town, she dealt with the boys, got Mason to kindergarten everyday, volunteered at school and managed to somehow work on the house and farm in whatever time was left over.

My time overseas was easy in comparison. After six months, I returned home to a new life in Lebanon. We looked forward to a life with no more deployments and with the hope that things might slow down a little. After the second deployment, I focused on finishing my bachelor’s degree. My two deployments had kept me from finishing my degree, which was delaying my promotion to captain. I would leave straight from work, go to school and not be home until late in the evening. While this went on for the next year and a half, Cathey put in the extra time and work at home that resulted from my absence.

She had also started teaching at Tuckers Crossroads Elementary. I don’t know where her energy came from, because most of the time I was dead on my feet. It finally paid off, and I graduated in 2007 and was promoted shortly after.

Several years later, deployment rumors were circulating once again. Most Tennessee Guardsmen knew they would be deploying in the next several years. Cathey and I talked that summer of 2009 and decided I should beat the rush and volunteer. Now an infantry officer, I volunteered as the Security Force Commander for the State’s new agri-business development team or ADT.

The ADT was deploying to Afghanistan where the situation seemed more stable and secure than in Iraq. By the time I got to Afghanistan, all of that had changed, and it was once again the “hotspot”. Of course, this didn’t help things at home. Cathey tried not to watch the news and shielded the boys from anything bad that happened where I was stationed.

During my absence, Cathey was being the mother, father, maid, cook, bill payer, teacher, keeper of the farm and animals, and fixer of anything that broke in the house. She also managed to keep doing projects on the house as she had time. She spent extra time at school in the afternoons and on the weekends going above and beyond what was necessary to make learning fun for the kids. I don’t how she did it all.

It was during this last deployment that I truly began to realize the extent of the sacrifices she and the boys were making. A year is very a long time to be away from those you love most. The stress is always there, and it takes its toll, especially after multiple deployments. And when a soldier comes back home, he is never the same person who left. Families are left to deal with his emotional
scars, and everyone must learn to be a family again. It is not an easy journey.

When I returned home for the last time in January of 2010, I knew I was a lucky man. Not just from living through four deployments (including Desert Storm), but I was returning to a home and family that were second to none.

I’ve seen many marriages end during deployments, and many homecomings represent sad occasions, but I was one of the lucky ones.

During my last days in uniform, if someone came up to me in a restaurant and thanked me for my service, I would let them know they should thank my wife as well. She deserved it just as much as me and probably more.

Now that I am retired, I try to apply my talents and experiences to the Boy Scouts of America as Sam’s Cubmaster in Pack 129 and Mason’s Assistant Scoutmaster in Troop 643. And true to form, Cathey is still the glue that helps me keep it all together.

Cathey has given so much of herself as a wife, a mom, and a first rate teacher. She doesn’t know I wrote this story, but I’m sure she’ll have a few choice words for me when she finds out. I just wanted to recognize and thank her this Mother’s Day for all she has done and let her know how important she is to me and our sons. She has long been my strength and helped me to be a better soldier, a better father and a better man.

I tell my boys often, “When you grow up, try and find a woman like mom, and you won’t go wrong”. I have seen many cultures in the world, and it is very common for men, even in our own culture, to place themselves above women and boast of their superior strength.

But as for me, I simply hope to one day possess…the strength of a woman.