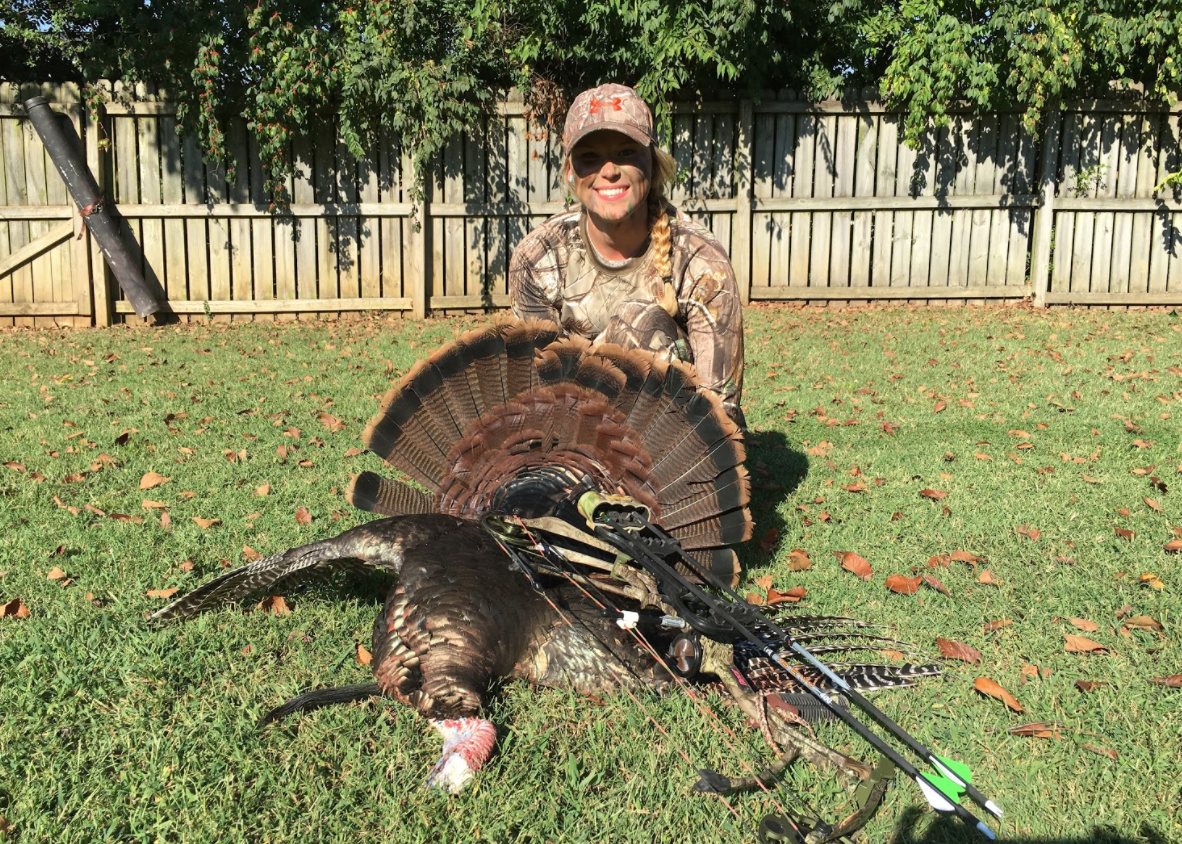 When imagining the ideal hunter, someone might think of a strong, burly man decked out in camo. But as Lebanon’s Brittnee Reynolds proves, hunting isn’t just for the guys.

Reynolds became the first female in Tennessee to harvest a turkey with a bow, a testament to her hard work and dedication.

“I love a challenge, and that’s exactly what bow hunting is for me,” she says.

A Watertown High School graduate, Reynolds earned her dental assistant license from the Dental Staff School of Tennessee. She now works in the service department at Lochinvar and married her best friend, Hunter, in October 2016. He’s the one who first got her interested in hunting.

“When I met Hunter, I had never been turkey hunting,” Reynolds says. “So, he took me on my first hunt three years ago, and I was hooked.”

This passion turned into a mission for Reynolds as she began looking at the National Wild Turkey Federation (NWTF)’s site, Nwtf.org.

“I love a challenge, and I love to set goals for myself,” she says. “I had been looking at the NWTF website and noticed there weren’t any females to register a turkey with their bow in Tennessee. So, I was bound and determined to make it happen.”

She put in “a ton of practice and patience” to get closer to her goal, mastering the skill of hunting with a bow. “I shot almost every day, from all different angles and ranges,” Reynolds says. “I wanted to make sure I was prepared to take the shot.”

When it came time to test her skills, Reynolds’s aim was true, making her the first female in the state to harvest a turkey using a bow. She shot an eastern wild turkey with a 9 4/16-inch beard that weighed 16 pounds, 6 ounces last September.

“It felt amazing,” she says. “After the long wait of 13 weeks, it was official and on the NWTF website.”

While she doesn’t currently have any specific hunting goals she’s working toward, Reynolds says she grateful the Lord has given her the ability to hunt. And she looks forward to it every time.

“There are so many things that go into a successful hunt,” she says. “Everyone that hunts, you’re always waiting on that giant buck to walk out or a turkey with a beard dragging the ground to head your way.”

Her advice to other young women looking to do something that’s never been done? She encourages them to never say never or limit themselves.

“Get out and work for what you want to accomplish,” Reynolds says. “I know not every female hunts, so whatever it is you love to do, do it with your whole heart.”