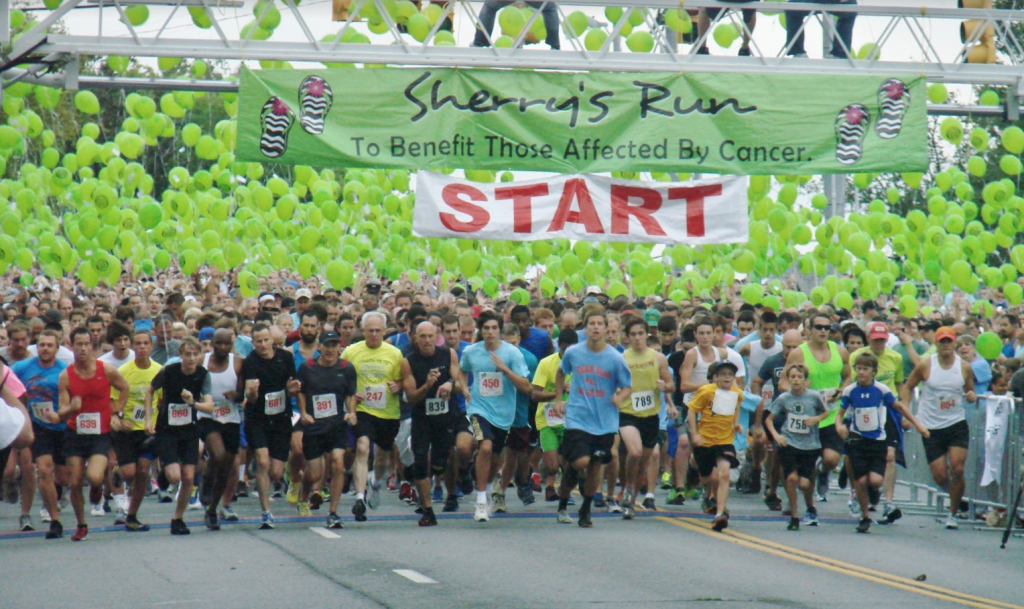 Show your support for your community members, friends and family battling cancer at the 14th Annual Sherry’s Run, which will be Sept. 9 on West Main Street in Lebanon. Sherry’s Run raises money to help cancer patients throughout the community.

The organization is named after Sharon “Sherry” Patterson Whitaker, who lost her battle with colon cancer in 2004. Her friends and family wanted to fight this disease and make a difference for others with color cancer after losing Sherry. That desire led them to hold a 5K/walk that would support cancer research, which would become the first Sherry’s Run. 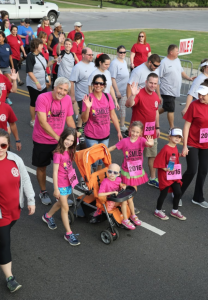 There were a few hundred people at the first 5K/walk in 2004: Now, there are close to 4,000 participants and volunteers involved with the run.

“It’s not just a run: It’s an experience,” says Alisa Van Dyke, marketing director of Sherry’s Run. “It’s inspiring just to be there that day. The entire community comes together to support each other. I feel like it’s a very hopeful and exciting experience.”

The uplifting day also includes live music, a survivor tent and other activities for the whole family. “It’s not about what cancer has done but about how we’re overcoming and providing hope,” says Van Dyke, who started working with the group in 2014.

This event is for anyone impacted by cancer. They also set up a tent at the event for survivors where they get to experience an outpouring of love and support.

“I’ve never seen a patient come who hasn’t been blown away by the community support,” Van Dyke says. “A lot of patients come back and volunteer because they want to give back.”

This year’s run is in memorial of Charles Tomlinson and Mackey Bentley, and it is in honor or Cindy Thorne and Denise Moore, who is a member of the Wilson Living Magazine team.

Moore was a good friend of Sherry’s and was instrumental in getting support and donations for Sherry’s Run through the years, says Tamara Lampsa, who has been friends with Moore for about 14 years and is Sherry’s Run co-chair.

Lampsa put together Team Mimi so Moore’s friends and family can show their support for her during the event. She’s expecting hundreds to join the team and honor their good friend.

“Denise has made a big impact in many people’s lives. She’s a true friend. She gives her support and time for her friends and community,” Lampsa says. “It’s time for us to give back to Denise.”

There will be several teams at the 5K/walk cheering on their friends and family, but providing that supportive environment isn’t confined to the annual event. 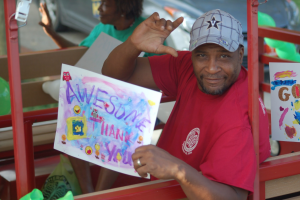 While the group originally was focused on raising money for research, they saw a bigger need after receiving requests from local people battling cancer who needed a little extra help.

So, Sherry’s Run became an organization and developed a patient assistance program. They’ve seen helped countless community members with cancer ever since.

“We still believe in preventing cancer, but what about the people who already have it and are struggling to take care of their families?” Van Dyke asks.

The majority of the people they help are referred to Sherry’s Run, and they supported 185 patients last year. They provide financial support for medical, lighting, grocery, gas and treatment costs — in addition to meeting their counseling needs.

“The money raised helps people struggling with cancer every day of the year — and the money stays here locally,” Lampsa says. “I can’t even put into words to describe the amount of people that we’ve helped. It really touches my heart.”

Van Dyke says her favorite part about working with Sherry’s Run is meeting the patients and getting to know them. “They inspire me,” she says. “I love seeing their courage and hearing the stories of the people who have helped them.”

Van Dyke encourages people to consider donating monthly or when possible to Sherry’s Run “because we’re helping them throughout the year.”

“People are diagnosed every day around us, so the need doesn’t get any less,” Van Dyke says. “The community rallied around it because everyone knows someone who has been affected.”

They also receive support from the Macon County Day of Hope and a Mardi Gras fundraising event at the Capitol.

“The No. 1 thing we want people to understand is that the money benefits their neighbors,” she says. “It benefits cancer patients here.”

Van Dyke encourages people who know someone with a cancer diagnosis to refer them to the organization and also support the group year-round.