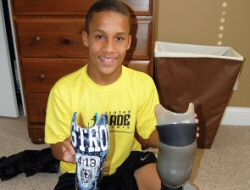 At his first track meet, this past summer’s Endeavor Games, Lebanon’s Andrew Kittrell, 13, brought home four gold medals and set four records in his age group. The lively lad may just be getting warmed up. One of his goals is to qualify for the 2016 Paralympic Games, while his biggest aspiration is to play football for the Vanderbilt Commodores.

Born with amniotic band syndrome, which resulted in the amputation of his left leg below the knee when he was an infant, Mt. ]uliet Christian Academy sixth-grader Andrew Kittrell plays football and basketball. Like other youngsters his age, he also enjoys bicycling, fishing and hunting.

When asked how he deals in a fast-paced world with a prosthetic left leg and foot, he puts it simply “I’m just like everybody else.” His stepmother seconds that emotion.

‘Andrew is just the inspiration of our family’s lives every day” says Tammy Kittrell, a graduate of Mt. ]uliet High as is her husband Mike. ‘Andrew will tell you that God has given him a great family. He and his brother Caylor [age 12] are very close and best friends. And his older sister and brother; Kristin and Tyler (aka Sissy 23,and Bubba, 21], think a lot of him as well.

“He has several grandparents and great-grandparents, as well that, of course, think he is completely amazing. We have a very close-knit family who are very supportive of each other and very encouraging to Andrew. I personally couldn’t love him more if he were my own child. No one in our family has ever treated him special or different. His personality doesn’t allow for that,” said Tammy who credits much of Andrew’s can-do attitude to Andrew’s father

“Mike has always said from the moment he laid eyes on Andrew he knew God sent Andrew to him for a reason. And l personally think it was the other way around as well. Without Mike in his life, he wouldn’t be the kid he is today.  Mike and Andrew have been inseparable since day one, and he has coached him in everything he has ever wanted to play so that he has always gotten the same opportunities as every other kid. They have a dad-son relationship that is very special and a bond that is unbreakable. They are both lucky and grateful to have found each other”

“We have a really good relationship. We love to goof off and mess around with each other” Andrew says of his father.  “He’s made me determined to strive in everything I do. Mom’s the same way. They both want me to excel in sports and school.”

Describing his son`s personality Mike Kittrell begins, “He doesn’t meet a stranger much of the time. He’s very outgoing and has a great sense of humor” (Indeed, when children stop and ask Andrew what happened to his foot, he often answers that it was bitten off by a shark or an alligator].

“He is very determined in everything that he does. The greatest thing anybody can do is tell Andrew he can’t do something, cause then he is gonna show you.

‘Yes, I can.’ “He received his first prosthesis when he was a year-and-a-half-old. ln about three days he was walking on his own, going anywhere he wanted to go.  At 5, he played football for the first time and never looked back after that,” said Mike, 32, who works in Lebanon for Central States Bus Sales selling parts and services for Bluebird school buses.

“Last year Andrew quit baseball and got to running track, so he is playing basketball for one more year and then will be making a decision. Last year after the Endeavor Games, he said, ‘Dad, l think I want to focus on football and track,’ so those may be his two sports after this year” said Mike, who coaches both the fifth-and-sixth-grade team and the seventh-and-eighth-grade teams at M]CS.

Sixth-grader Andrew who plays running back and middle linebacker on both teams and has enjoyed quite a growth spurt the past year going from 88 to 122 pounds and growing from 4-foot-7 to 5-foot-1, says, “l still like football a lot better [than other sports] cause that’s the only sport where you get to hit people—legally”

Andrew’s athletic ability took a giant stride last December when he received his first prosthetic leg, specially built for running. Overnight it increased his speed some 50 to 60 percent and allowed him to go from running on his heels to running on his toes.

“lt was a lot of fun and actually let me hang with everybody else that was running,” he recalls of the first day he put on the prosthesis. “The other leg was like strapping bricks to your leg and trying to run. This one pushed my leg up, and l’m running on top of my toes’.