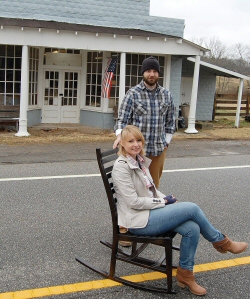 STORY and PHOTOS By KEN BECK

Inside a long ago clapped shut country store in Cainsville, 18 miles south of Lebanon, just a mile inside Wilson County, Matt

Alexander wears blue jeans, a navy sweatshirt and toboggan cap as he labors on a below-freezing January day. A space heater plugged into the wall gushes out some warm air, but the interior of the old wooden structure remains chilly enough to please a penguin. Artifacts from yesteryear lie scattered willy-nilly on shelves, but power saws and hand tools remain front and center where Alexander works to create contemporary furniture with a Southern flavor.

Welcome to the woodwork shop of HollerDesign, a company the Cainsville native has plunged into with his mate, Melissa. The University of Tennessee graduates spent two years in Detroit and two years in Brooklyn, N.Y., before returning to Matt’s roots a year-anda-half ago to pursue their dreams which, for now, are pinned on pieces of furniture such as a rocking chair, coat tree, farm tables, ladderback chairs, desks and farm benches made from reclaimed slabs of barn wood.

“We were getting more serious about HollerDesign and starting it as a business. We needed to cut down on our overhead and live some place with a lower cost of living,” said Matt about their move back to Tennessee from the Big Apple. “It seemed to make sense. A lot of our furniture is based off of traditional Southern furniture. “My last year in grad school, in 2007, I made a rocking chair, and at the time it seemed like we could make a business in furniture and architectural design using our Southern roots as a basis of inspiration.”

HollerDesign's rocker has already made a splash. The December- January edition of Garden & Gun Magazine selected it as an honorable mention in the Home category of their first annual “Made in the South” awards.

The magazine reports: It’s no easy feat to improve on a classic like the Southern rocking chair, but husband-and-wife design duo Matt and Melissa Alexander did just that, creating a sleeker, clean-lined version of the original. “It’s our way of interpreting a traditional form through a contemporary lens,” Matt says. . . . Each piece is made using a digital CNC router-technology that makes milling the modern shape possible.

“I think the idea of HollerDesign, we had the seed planted even back in Detroit. We wanted to move a little closer to home and put down some roots,” said Melissa. “I think we always both knew we wanted to work together, and our skills really compliment each other. We don’t do exactly the same things. Matt leans more to the smallscale production of furniture, and I lean a little more toward interior design, architecture and things like that.”

Born in Dowagiac, Mich., Melissa moved with her family to Dandridge, Tenn. (population 2,700), about 30 miles east of Knoxville, when she was 12. Her father was a tool and die worker.

Matt, a graduate of Oakland High School in Murfreesboro, was raised in Cainsville, where his mother’s side of the family, the Harris’s, planted deep roots when Cainsville was established by George Jones Cain in 1829. The house he grew up in is now the place that he and Melissa inhabit with their two cats: Rick James, aka RJ, and Miss Jackson, aka MJ.

The couple wed two years ago in Matt’s parents’ front yard, about 300 yards off Cainsville Road and near the center of the 700-acre, beef cattle farm that Matt’s father, Donald, operates.

The HollerDesign woodworking shop is located inside the historic structure known by the folks of Cainsville in the first half of the 20th century as Mr. Freas Ayers’ store. It likely closed around 1960. Just 30 yards south on the same side of the road stands a second, retired country store that shut its doors in the 1970s when it was known as King’s Store. From about 1890 to 1950 it was run by “Mr. Jess” Harris, Matt’s great-grandfather. The old Ayers’ store, where Matt makes fine furniture, rests on a foundation of limestone rocks and has a short front porch with a couple of wood benches. Light blue metal covers the sides of the structure, and four white metal columns support the porch roof, while the front windows hold dozens of small panes of glass.

Matt put his hand to woodwork as a boy of seven, helping his dad make furniture and crafts. He said, “I didn’t have any interest in going into this until college. I began majoring in architecture at UT. After a year and a half I switched to sculpture with the idea of going to grad school for furniture design.”

As for Melissa’s career choice, she said, “In high school I thought it was something I wanted to do but wasn’t sure until I got into college. I always enjoyed drawing and drafting and making things with my hands.

“Matt was actually the one of the first persons I met in college at freshman orientation,” said Melissa. “We didn’t start dating until two years later. He was in the architecture program for three semesters and decided to switch to sculpture.”

After earning degrees at UT, the two moved to Detroit where Matt attended Cranbrook Academy of Art and completed its 3-D design program in furniture and product design. Melissa worked at inFORM Studio, a boutique architect firm.

Two years later, they migrated to Brooklyn. There, Matt gained experience as a studio assistant with the Jason Miller Studio, while Melissa was employed with the design/build firm MADE, LLC, a company that specializes in high-end residential projects. Matt said they enjoyed being short-term New Yorkers, and Melissa loved the fact that she didn’t have to drive. “We didn’t even own a car while we lived in Brooklyn. I sold my car before we moved there. That funded the move,” she said. There were other perks to big-city life. “I love the type of urban fabric where everything is walkable and close, and there are convenient transit and bus systems,” said Melissa. “I really enjoyed getting up and walking outside the front door, and you’re there. No car ride between you and what you want to be doing.”

Melissa stays connected to the big city as Design Fellow at the Nashville Civic Design Center, an organization that, among other functions, assists the Metro Nashville Arts Council in such ways as putting together a comprehensive report of location studies for Davidson County's one percent for Public Art Program.

Last summer, she designed the Nashville Urban Design Self Guided Walking Tour, a pocket-sized brochure, and next tackles a brochure design for a public art walking tour of downtown Music City.

As the team of HollerDesign, Melissa and Matt submitted the winning entry to last year’s Germantown Gateway Competition in Nashville. Their design process began with an exploration of the neighborhood and its history.

“The thing that was palpable about that neighborhood was that you could tell it had been very industrial at one time. There is lots of brick and kind of gritty texture still there even though it has condos and small scale residential. We wanted to express the gritty history, and so we started with the water towers and used those as inspiration to give the Germantown neighborhood new branding that would speak to its roots,” said Melissa.

But, it’s back in the shop where HollerDesign furniture takes shape. Here, Matt utilizes a table saw, miter saw, bandsaw, planer, joiner and razor-sharp chisels to transform wood into handsome pieces of furniture. Thus far, the duo has crafted chairs, table lamps, design tables and side tables, and he just polished off a drawing storage cabinet for their office.

In January, they built a bed to trade for a set of used wheels. “I had a cousin who needed a bed, and I needed a truck, so we did a little bartering.” Matt got a 1998 Toyota Tacoma pick-up, and the cousin got a new white oak bed, loosely based off of HollerDesign’s prototype rocking chair.

“Most of the wood comes from the farm here, and we actually have a sawmill that my dad and I operate,” said Matt. “We use all the local material around here (red and white oak, walnut, ash and cedar trees).”

While Melissa hasn’t become an old hand around the sawmill, she does share some of the sweat equity in the woodshop. “I don’t do anything too exciting—a lot of finishing and a lot of sanding. I’m incredibly particular and usually that lends itself to creating drawings. I like it, getting in there and working with him, but not in winter so much, cause it’s awfully cold,” she said.

The couple’s short-term goal for now, Matt said, is “just to start producing our furniture and get them out there and sell them. The most difficult problem we have is that there are just not many contemporary furniture retail stores in the area. “We hope to start this year getting a line of furniture prototyped and made that we will start taking to furniture design shows,” said Matt, referring to such events as the Home Grown Show in Knoxville.

Meanwhile, Melissa commutes between country and city. “I take the train (the Music City Star) when I go to Nashville. I love the train. It’s kind of interesting: For most of the summer we just had one vehicle. Matt would drive me to the train. It was really nice: Kind of city life, farm life all in the same day.” Melissa hopes to obtain her architecture license within a year. “I would like to see HollerDesign expand into architecture and interiors as well as furniture,” she said

HollerDesign is a collaboration of husband-and-wife Matt and Melissa Alexander, two Southerners who left home and returned with an imperative of what it means to be Southern, and a desire to share that view with others. Their office and workshop is located on Matt’s family farm in Cainsville where they focus on creating objects and spaces that are regionally influenced and culturally significant. Their work embodies a core of Southern values. They are inspired by the late demographer Calvin Beale’s view of the South: not “barefooted hillbillies given to moonshining and quite disinclined to work for a living,” but that we Southerners are “inclined to self-sufficiency and simple living, [with a] widespread interest in environmentalism, conservation, alternative fuel sources, rural aesthetic values, home food production and local self-government.”

The work of HollerDesign is inspired by rural forms and textures, yet is augmented by a lens of contemporary manufacturing. The work is not simply a romanticized view of Southern objects, but a reinterpretation and recreation based on both our unique design sensibilities and the economies of contemporary manufacturing. Their objects exhibit a “love of making,” retain a subsequent intrinsic value and utilize a production process that is inherently sustainable, but which is grounded more in the tradition of craft than in the greenification of current systems of manufacturing.