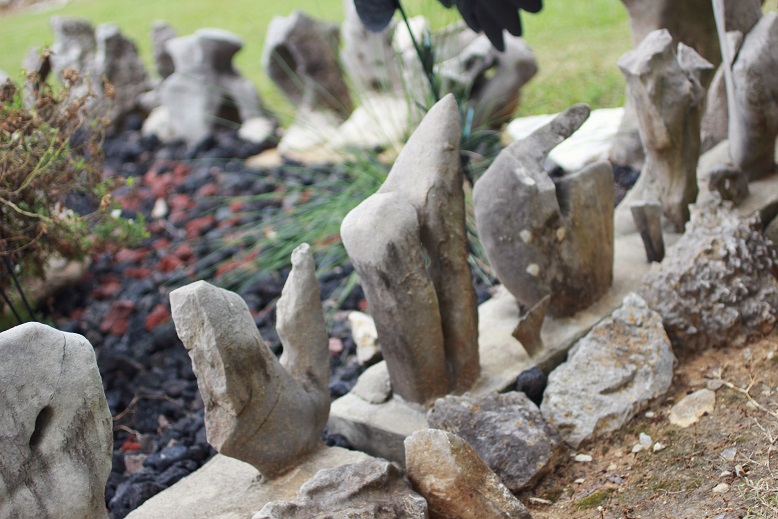 Sometimes the “masterpiece” sticks just 6 to 12 inches out of the ground. A rock.

Wayne Barnes spent hours with a pick and shovel to dig it out of the hard dirt, somewhere on a no-name farm (he won’t divulge his treasure rock-trove spot) in Smithville, Tenn.

But that little poke out of the ground turned out to be a huge limestone rock that had the exact shape of an elephant. Yes, an elephant. Even a toddler could specify the shape.

Barnes (we’ll call him his nickname, ‘Barney’, from now on) couldn’t exactly plop it onto his Lebanon front yard. It took a lot of subsequent grunts and groans, pulleys, shear fortitude, and even a sled at one point to transport this “beauty” to centerpiece his now famous “rock garden,” that has dozens of people daily do a double, and triple take, and many backups to just gaze upon the limestone wonder he’s “cultivated” for the past 12 years.

As far as “Barney,” he got that name in high school. And for anyone who knows the lovable character Barney on retro fav show Andy Griffith, this retired TRW welder has that frenetic energy.

“Well, I guess you could say I’m a little high strung and hyper,” he divulged with a laugh.

You’d have to be high strung to be a rock hunter by day.

It all started when he went to a rock show (yes, there are such).

“All the rocks were so beautiful,” he recalled. “They are limestone.”

He went to a place in Carthage and spent about twelve hours digging up a rock, and was awed at “how pretty it looked after I cleaned it up.”

He put it in his yard. Some time later a man came by his house and introduced himself after he saw what appeared to be an emerging, (admittedly, at that time a rather crude) rock garden on Barney’s well-kept Lebanon subdivision lot.

“I went out to his farm in Smith County and really went crazy,” he said. “There was a lot of rock, and a lot of them looked like animals.”

He said a friend got him into limestone rocks that take on the resemblance of animals, if you cock your head to one side and use a little imagination. With an artist’s hand and paint, they are replicas of animals.

Barney for a few seconds tried to explain that years ago Smith County was an ocean, and limestone was made with holes through them from the water… then he gave up, and just said he’s fascinated. For many years he’s searched far and wide for rock for his popular garden. His wife, Judy, helped revive it; she repainted the rocks and renewed the garden by making even more of the rocks into animals.

“I have always loved working in the yard and I love flowers and there’s nothing more pretty than a neat yard,” she said.

Judy noted when they first starting dating, “I didn’t care for all the rocks he had outside, but I starting looking more at the rocks and they sort of grow on you. If you start to look at them with a little imagination you see all kinds of things.”

Like… a seal, a cow, a horse and dinosaur head, a dog and baby bear. There’s even a Woodstock (as in, Snoopy’s Woodstock).

“They just needed a new coat of paint and I loved it so much I kept painting more of the animals. It’s fun to have people stop and ask to take pictures.”

One day, a woman visiting the area from Arizona told Barney and Judy there are a lot of rock gardens in her hometown.

“She said the rocks were different here in Lebanon and she just loved it,” Judy said.

However, the showstopper on the Barnes’ property is their magnificent geode mailbox. Geodes, are, in layman’s terms, a hollow rock with sparkling crystals inside. Many a southern kids find the somewhat unspectacular mud-colored, bumpy rocks near creeks and burst them open to reveal a hidden treasure of sparklieness.

“I found a farm in Woodberry, Tenn. full of geodes,” said Barney. “Most were in the ground and it took me seven months to collect them for the mailbox stand.”

“I busted them in half, and pressured washed them with oxalic acid,” he said. “It’s a spectacular sight to see them all piled up together. People stop by all the time and gawk.”

His largest ornamental rock weighs 800 pounds. He hauled it from another undisclosed place just 15 miles from his house.

Six of his more than 150 rocks are painted. Now 67 years old, Barney has slowed down a bit. He’s got pretty flowers planted next to his rock flowers and he’s spread black lava rock around.

“Mulch just would not cut it,” he laughed.

He maintains the showstopper rock garden and dabbles in a little golf. (The clubs he traded for rock are long gone.) He’s also into scrap metal. He’s a bit upset some “kids” are stealing his sparkly geodes from his mailbox stand. It hurts a bit because he spent months down in the Woodberry, Tenn. ravine retrieving those marvels of nature.

“The largest one we found was 181 pounds,” he remembered. “It was giant, oversized, we pulled it up slowly on a dolly.”

Growing his rock garden through the years has been fun, said this quirky rock artist.

If you want to witness Barney’s rock garden, it’s at 1013 Shirley Drive in Lebanon.