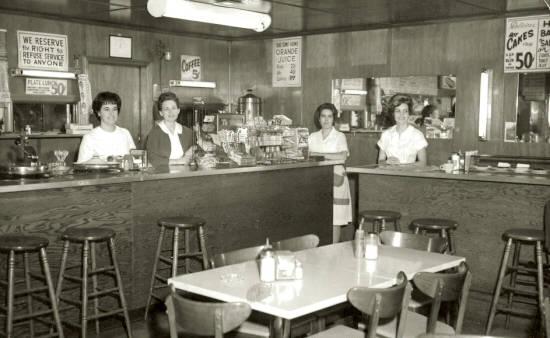 Owner, Joann Lague pictured with her young team of waitresses soon after purchasing her restaurant in May of 1959. Pictured from left to right are Bernice Mitchell Blankenship, Joann Bowen Lague, Shirley Brewington King and Shirley Flatt Givens.

For those that can remember, Ideal Café, was certainly the place to be in Wilson County from the late 1950’s through the late 90’s.

At twenty-two years of age, with a one thousand dollar loan from her mother and her small savings earned while working at “The Lighthouse” restaurant as a waitress, Joann purchased the “Orange Bar” which was located where the Art Mill is today, off the Lebanon square.

“My sister, soon changed the name to “Ideal Café” so people wouldn’t think we were a bar,” reminisced her sister Bernice, pictured above at age of 13 years old. “Joann was an entrepreneur and had the Midas touch. She took care of all of us younger siblings and had me working in her restaurant after school and in the summers,” explained Bernice.

Bernice, now 67, lives with her husband in Lebanon but still remembers those days fondly. “The restaurant was across from the courthouse which, at the time, was located in the now empty parking lot on the square. All the lawyers and Judges would come in every day and sit at the table in that picture. Many, many court cases were settled in the restaurant, probably more than in the courthouse across the street,” remarked Bernice.

Back then coffee cost 5 cents and the favorite hot plate lunch consisted of roast beef, mashed potatoes, cole slaw, white beans and corn bread, costing a whopping 50 cents. “We had lines waiting at lunch everyday. The lawyers would have to be shooed out by my sister so she could use their table for the lunch crowd, but after lunch they would all come back for coffee.” “And they loved to pull pranks on Joann, especially Bill Baird. He was notorious for them. One day my sister was bending down to get something out of the freezer and he threw a firecracker into the kitchen. She literally chased him around, she was so mad. When she would go on vacation they’d put a For Sale sign on her door. Another time Bill Baird and Richard Brodhead convinced a man to go into the restaurant to tell my sister that he was with the FBI, there to investigate her dirty silverware. They all just loved to pick on her and get her mad and boy would she be fuming! O’Neal Williams, who used to own the salvage store next door would always come into the restaurant and try to steal her money box. One day she literally chased him around the square!” exclaimed Bernice with a hearty laugh.

“It was like a big family and you would hear all sorts of gossip and stories around those tables. The regulars consisted of the late Judge J.O. Bond and attorneys Richard Brodhead and Ewell Lee, who have both since passed away. Retired Judge Haywood Barry was a regular as was former Senator Bob Rochelle and attorneys Dave Allen, Ernst Cotton and Mr. and Mrs. Simms, who owned the local television store. Other familiar faces included Harry Holland, George Harding, Nathan Hankins, John Hatcher, Turner Cowan and Dr. Ernest Stockton.

“In fact, another regular, local dentist Gordon Miller, came to my sister and asked her to be on the ground floor of Cracker Barrel,” remembered Bernice. “I distinctly recall my sister telling him how ridiculous the idea was and that it would never take off. She always said that was one of the biggest mistakes of her life.”

The restaurant would open at 4 a.m. and Joann’s mother, Mattie Mitchell, and younger sister, Evelyn “Dean” Mitchell Agee, would start the breakfast. It would remain open through lunch and close after dinner at 7. The only day it closed was Sundays.

“We served a salad called “Mr. Bob”. It was named after Bob Askew, who owned Askew and Grissim, three doors down. He liked his salad a certain way and after a while other patrons started ordering their salad, like his, so my sister named it the “Mr. Bob”. The big canisters you see sitting in the counter (in the photo) were filled with fresh squeezed orange juice and after practice the football players would stop by and drink gallons of juice. As you can imagine, as a teenager, I loved working on those days!”

“When I was 16 years old, my sister bought me a 1963 Rambler. I had to pay her back, but she always made sure to take care of us. I remember thinking how unfair it was to have to give up basketball to go work there after school for $12 a week, but now looking back, I know my sister was teaching me the meaning of hard work. She taught us responsibility.”

Joann died in 2003 after selling “Ideal Café” in the late 1980’s and moving on to another of her businesses “Ideal Ceramics”.

“Everybody still talks about her restaurant and all she meant to the community. We hosted a retirement party for her and expected just a small crowd and were amazed by the turnout. We had reserved the back room of Sunset Restaurant but completely filled the entire place. But, that’s the kind of person my sister was, everybody loved her. She was tough but at the same time, generous.”