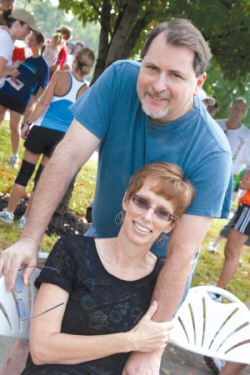 In 2009, when we thought things could not get any worse, the unthinkable happened. Fawn was diagnosed with stage 4 stomach cancer. I am certain that we received this news no differently than anyone else. It was with numbness and a sense of disbelief that we listened to the doctor’s words. All of her life it seemed that Fawn had done everything right. She was what many would consider a model person. Her parents said she never disobeyed and or had to be scolded. She ate all the right foods. She never smoked. She took care of herself and her family. She was good to everyone and freely exercised her gift of encouragement. To know her was to feel important and loved. She loved God and put Him first in all areas of her life.

Her sister has also been fighting disease and cancer for many years. And we had just lost her brother to cancer a few years earlier. We considered ourselves blessed beyond measure that Fawn had been spared their fate until we received the devastating news about her diagnosis. Our lives were turned upside down and our family was in shock.

Nothing was the same anymore. We thought our lives were impacted with the loss of my job and it seemed as though that was the end of life, as we knew it. Now we had a whole new vocabulary to learn. Terms like chemo, ascites, side effects and other words we did not want to hear now had to be discussed regularly. Instead of the blissful life we had hoped for we entered into a very dark and claustrophobic tunnel that was swallowing us up despite our best efforts. We cried out to God repeatedly and although we were not delivered from the situation, we know He was walking us through it and still is. Fawn fought for her life with every ounce of strength and faith that she could muster. During that time when I was out of work, we received assistance from Church, family and friends.

One Lebanon organization that was such a blessing was Sherry’s Run. They supported us in every way that they could.

Over the last few years, Fawn battled multiple cancers. Sometimes she was victorious and we rejoiced. Other times, new symptoms would just appear. We kept our faith that she would overcome the odds. Through multiple surgeries, a strict diet and alternative medicines, Fawn persevered for a long time.

Ultimately however the toll that this fight took on her body proved more than she could handle. On May 9 of this yean she entered into His presence to worship Him full time. She left quite a legacy behind her that even death could not erase. Many in Lebanon know her smile, her southern belle charm and her way of encouraging people. Not only did we find a piece of the good life here but Fawn shared her life with Lebanon as well. Ask anyone that knows her.

Prior to these events, I had taken an interest in writing. The seed of it was planted in me long ago. I didn’t recognize it until recently and denied it until friends and family kept insisting that l had a gift. I had attended college and for a time majored in mass communication hoping to become involved in the film industry or perhaps journalism. It was my mistake to abandon that dream but I was young and did not make wise decisions. I guess even as we get older we still do not necessarily make the best choices do we?

Even though she was not well, Fawn and others encouraged me to keep writing and to start a blog in the hope that I would further develop my skills. I tried hard to think of a catchy and unusual name for it and eventually came up with Cognitive ComPost. Sort of a recycling bin for my thoughts you might say. I even self—pubIished a short novel so I would have a finished product to show for my efforts.

I enjoy writing humor so this was the fictional account of a man who wanted to be a writer but  did not have the talent, so he just pretended. I called it “Diary of a Non-Writer”. Fawn was so proud when the box was delivered with a few copies I had for family members. It was surreal to see my picture on the back cover and my name on the front. It is a rather small paperback but it is a beginning. I was pleased to have accomplished something instead of denying the ability to do it.

Fawn constantly encouraged me to try. She always said that at the worst, I could fail but at least I would have tried.

The blog, which started as a way to fulfill a need for me, has transformed into a tribute to Fawn and the unbelievably wonderful life we shared. The “piece of the good life” that we found here can never be taken away from us, just like our memories. Our three oldest children are all married and on their own now. Shannon and I still live in Lebanon in a nice apartment. Fawn will always reside in our hearts and enjoys a great view of Lebanon from her new heavenly home.

So while it may seem odd that only a few short months after my beloved wife’s death, I`m writing an article titled “Finding Your Piece of the Good Life”, the fact of the matter is, that Fawn and I did find it together.  And that is why I continue my blog. It’s my way of sharing what we found with everyone. But it’s not only my tribute to Fawn, but it’s also my way of finding peace with all that has happened.

To Read About Jeff and his life with Fawn goto www.cognitivecompost.com. His blog recently hit 10,000 views!