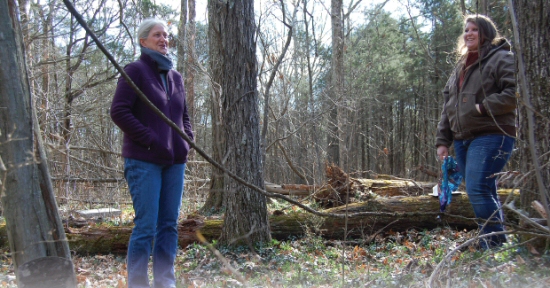 Photos and Story By KEN BECK

Beth Howard has found her calling in finding the final resting places of the forgotten.

Over the past 16 months, the amateur cemetery sleuth has documented the graves of 450 to 500 Wilson Countians whose remains lay in 43 cemeteries within or near the boundaries of Cedars of Lebanon State Forest and State Park. The deceased include several of husband Ronnie Howard’s ancestors, who were laid to rest between 1895 and 1932 in Sanders Cemetery.

Her odyssey started while researching the Howard family genealogy. When she got stuck on the paper trail, she decided to hit the woodsy trails and search ancient graveyards for clues.

“Some people think I’m crazy,” smiled Howard. “They say, ‘You’re gonna do what?’ I tell them, ‘I’m going out to some cemeteries’.” “I would go out and take a picture of a tombstone, get home and realize that another person buried in the same cemetery was part of the family. I’d have to go back and take another photo. I finally started photographing all the tombstones,” she said of her travels into yesteryear that carried her into the State Forest.”

“I had talked to Buddy about giving the info to the Park office to help me as well as others to try and get additional information for myself and to help others that are looking for their ancestors. It grew from there.

“David Rowland is really knowledgeable of the area. He made it easier for me to find the cemeteries, and there were a couple I found that he didn’t know was out there (outside the forest boundaries). All in all, I’m still looking for Howards and finding them,” said the seeker of lost graves, who is mapping the cemeteries as well as noting their locations by GPS.

“I don’t want people to think I actually discovered the cemeteries. I’m just going back out and finding them for myself. I know that other people know that they were there, but they have been forgotten because they are so grown up, and I don’t want them to be forgotten,” explained Howard, the Administrative Assistant to John “Bev” Spickard, Wilson County Register of Deeds. “I work, and I do this. I get up in the morning and look up ancestry.com and have my coffee.”

On a freezing but sunny January morning, Howard and her daughter Emily park their Jeep on the side of Simmons Bluff Road and hike a trail north underneath power lines for a couple of hundred yards before turning west 75 yards or so into the woods. Here a shady half-acre plot of ground, the site of 40 to 50 graves, boasts a green carpet of sprawling periwinkle. The forest, a mixture of hardwoods and cedars, allows patches of sunlight to crack through their woody ceiling. A few large dead cedars stand erect, their bleached bark coats reaching for the heavens, while several ancient cedars have crashed to the ground. Quick observation of the terrain reveals noticeable depressions, which signify burial sites, some of which bear a stone or marker, but only six of the gravestones are readable. Howard knows the names of nine of those who sleep here. Besides her husband’s great-grandparents, they include Calup McPeak, J.C. “Boot” Sanders, W.F. Sanders, Cantrell Sanders, Susan Lannom Hackney, Polk Hackney and Betty Woodall.

“We found Sanders Cemetery on October 30 of 2010,” recalled Howard. “Ronnie, Emily and I went into the woods and fanned out in different directions, and Emily found it about 30 minutes later.”

“I noticed the woods seemed to be more open,” said Emily, 20, a Lebanon High School graduate. “I got so far, and I saw one of the stones sticking up, and I hollered at ’em. It was one you couldn’t read, and I got to looking and found Granville and Lucy’s (her greatgreat grandparents) grave.” (Granville Howard died in 1923. His son, Haskell Howard, placed a marker on the gravesite in 1960, thus it is the only “modern” tombstone in the cemetery.) “It was pretty neat since we didn’t know where he was until Mama heard about the cemetery, and I found it,” she added.