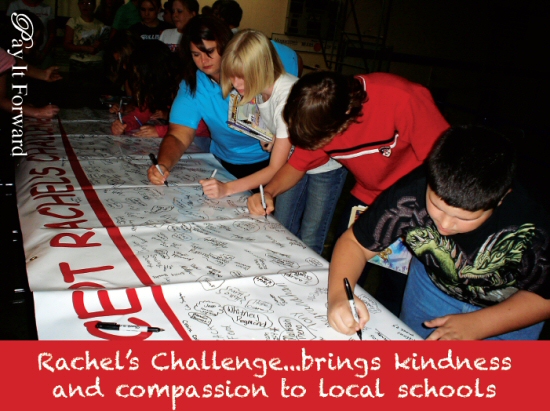 “I have this theory that if one person can go out of their way to show compassion then it will start a chain reaction of the same.” – Rachel Scott

The word “Columbine” brings back many memories. Most of which are centered around fear, anger and disbelief that such a horror could have ever occurred, that so many lives could have been lost and that so much innocence could have been wasted.

Rachel Scott was one of the students who lost her life on that day, in fact, she was the first student killed at Columbine High School. Those who witnessed her murder, relayed that it appeared the gunmen had sought her out. And yet, during her 17 years on this earth, Rachel touched the lives of many with her kindness and compassion and her inspiration to live a better life… which lives on today through Rachel’s Challenge.

Soon after Rachel’s father, Daryl, lost his daughter, he was called upon to speak about her at various events. He soon realized that reading her words out loud, from her various journals, inspired others to live a kinder, gentler life. Today, Daryl and thirty other speakers criss-cross the nation spreading Rachel’s words, in hopes that there will never be another Columbine.

After Rachel’s death, her parents received hundreds of calls and emails from people who said they’d known their daughter and how her simple acts of kindness had changed their lives. While they knew she was a good person, they didn’t realize how often she had gone out of her way to be inclusive, to be compassionate and to be welcoming to the students at her school.

Soon her family also came across Rachel’s journals, her drawings and her essays and realized that she could live on, through her words. The contents of Rachel’s six diaries have become the foundation of one of the most life changing school programs in the country. And from November 7th through November 14th, six Wilson County schools and their students will have the opportunity to participate in this program. Paul Jackson, Linda Schenk, Dorie Mitchell and Mike Davis are the powerful force whose determination has brought the program to Wilson County.

“No school is ever the same after Rachel’s Challenge,” noted Linda. “And we could not have brought this program to the area without Director of Wilson County Schools, Mike Davis’, full support.

The mission behind the program is to bring compassion, kindness and civility back into the school system. As many know, bullying has become rampant amongst teenagers. Powerful audio and video of Rachel’s life and the Columbine tragedy holds students spellbound during these presentations and impacts them in ways that motivates them to treat one another with kindness.”

Paul Jackson, a native of Mt. Juliet, has been involved with the organization almost since its inception. “At the time I was working with Josh McDowell, a youth evangelist, and we helped organize the first memorial at Columbine which was televised worldwide by CNN. I became close to Rachel’s father and his family and joined his organization in the hopes of spreading Rachel’s words,” said Jackson.

So far, Rachel’s Challenge has been presented in over 800 schools across the nation. “We are hoping to start the program in Wilson County, with six local schools in 2011, and next year bring it to other schools in the county,” stated Paul. “We are also going to make certain the children in Youth Leadership Wilson also participate in this program and take it on as a group project”, added Dorie. “And we also have plans to include the students at Friendship Christian School, as well.”

The program begins with a mesmerizing 60-minute assembly for the students in the morning. Videos, audio and trained speakers keep the students spellbound. Then in the afternoon, there is a 90-minute program for 100 students for a club called FOR (Friends of Rachel.) Community events are then held throughout the evening to bring in the parents and other adults and students from the community.

The club is made up of 100 students that the school counselors will hand-select. “We ask that they don’t just pick the usual 100, but they carefully select those students who can truly take Rachel’s words and live them. Then these students are called upon to create events and programs in the school that keep Rachel’s Challenge going. For instance, they form welcoming committee’s for new students, or they will select various staff members that may often go unrecognized for their service, like cafeteria workers, and express their appreciation for them. Another program we help them put together is a “mix it up day” where different cliques are asked to separate, and we challenge the kids to sit with other people at lunch. The goal being to break down some of the barriers created by cliques by allowing students to get to know each other better.”

“To date, Rachel’s Challenge has directly affected the lives of more than 450 students who had planned suicide,” stated Paul. “We often receive word that soon after the program’s inception, a child comes forward to say they were about to commit suicide because of the bullying or the loneliness, and if it were not for an act of kindness, as a result of Rachel’s Challenge, they would have been lost.”

“That is why we do it, because if we can save just one life, then the word “Columbine” may one day, not be so much about the horrific tragedy, but also about the chain reaction of kindness that all started with Rachel.

RACHEL’S CHALLENGE WILL BE HELD IN WILSON COUNTY AS FOLLOWS:

Businesses and sponsors are encouraged to contact Linda if they are interested in being involved. To learn more about Rachel’s Challenge go to www.rachelschallenge.org or contact Linda Schenk at 804-5464.

MY EYHICS, MY CODES OF LIFE
Rachel Scott period 5

Ethics vary with environment, circumstances, and culture.  In my own life, ethis play a major role.  Whether it was because of the way I was raised, the experiences I've had, or just my outlook on the world and the way things should be.  My biggest aspects of ethics include being honest, compassionate, and looking for the best and beauty in everyone.

I've been told repeatedly that I trust people too easily, but I find that when I put my faith and trust in people when others would not dare to, they almost never betray me.  I would hope that people would put that same faith in me.  Trust and honsety is an investment you put in people; if you build enough trust in them and show yourself to be honest, they will do the same in you.  I value honesty so much, and it is an expectation I have of myself,  I will put honesty before the risk of humiliation, before selfishness, and before anything less worthy of Gospel truth.  Even in being honest and trustworthy, I do not come off cold and heartless.  Compassion and honesty go hand in hand, if enough of each is put into every situation.  I admire those who trust and are trust worthy.

Compassion is the greatest form of love humans have to offer.  According to Webster's Dictionary compassion means a feeling of sympathy for another's misfortune.  My definintion of compassion is forgiving, loving, helping, leading, and showing mercy for others.  I have this theory that if one person can go out of their way to show compassion, then it will start a chain reaction of the same. People will never know how far a little kindness can go.

It wasn't until recently that I learned that the first and second and the third impressions can be deceitful of what kind of person someone is.  For example, imagine you had just met someone, and you speak with them three times on brief everyday converstaions.  They come off as a harsh, cruel, stubborn, and ignorant person.  You reach your judgement based on just these three encounters.  Let me ask you something… did you ever ask them what their goal in life is, what kind of past  they came from, did they experience love, did they experience hurt, did they look into their sould and not just at their appearance?  Until you know them and not just their "type" you have no right to shun them.  You have not looked for their beauty,  their good.  You have not seen the light in their eyes.  Look hard enough and you will always find a ligh, and you can even help it grow, if you don't walk away from those three impressions first.

I am sure that my codes of life may be very different from yours, but how do you know that trust, compassion, and beauty will not make this world a better place to be in and this life a better one to live?  My codes may seem like a fantasy that can never be reached, but test them for yoursel, and see the kind of effect they have in the lives of people around you.  You may just start a chain reaction.