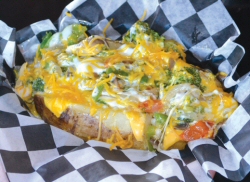 George Ambriz can do more things with potatoes than Bubba Gump can do with shrimp.

The proprietor of Oh! Papas & Beer on Lebanon Road knew he would have to offer something other than typical pub fare to stay competitive in this market, so he’s developed a menu centered on his favorite vegetable: the potato. (For those who aren’t fluent in Espanol, “papas” is the Spanish word for “potatoes.”)

Potatoes and beer have a long history together. Whether it’s the British traditional dish of ‘bangers and mash’ with a pint of ale, or German potato salad with beer, or the Hispanic ‘papas fritas’ (fried potatoes) and cerveza, these dishes often grew out of cultures where factory or farm work required men to consume high carbohydrate diets to get through the workday. Ambriz has always had a fondness for spuds, but he noticed that, when he would go to dinner at a steak house, the baked potatoes were often small and the toppings sparse. Sometimes he would order a second one just to fill him up. At Oh Papas, Ambriz imports cases upon cases of one-pound-plus Idaho potatoes for use in his sides and entrees.

Potato wedges, waffle fries, fresh cut fries, seasoned curly fries, potato skins, sweet potato bites, potato (tater) tats, and homemade chips, are just a few of the sides that Ambriz offers with his steak sandwiches and burgers, but he also has a number of potato-based entrees as well on the menu.

The Hawaiian Papa, one of George’s signature entrées, is a one-pound Idaho potato stuffed with smoked ham and pineapple tidbits. Papas con Chorizo is Mexican sausage stuffed into a spud and covered with grilled onions, mozzarella cheese, butter and sour cream. Carne Asada is ten ounces of steak topped with grilled onions, mozzarella and sour cream and layered over a big potato. The ‘Papas and Wings’combo comes with seasoned, curly or regular fries as well as your choice of kamikaze teriyaki, spicy barbecue, or diablo cayenne sauce.

Oh! Papas & Beer has several other specials, including the Gatlinburg Big Dog, a foot-long smoked sausage topped with grilled onions and peppers. (Ahhh, a meal truly worthy of “Da Bears” fans.) The Veggie Papas is stuffed with onions, peppers, mushrooms, cheese and broccoli. The basic Papas & Burger and the Philly Cheese Steak sandwiches are favorites, too. All for around $6-$8. Not bad for sports bar fare.

A native of Baja, California, Ambriz worked in construction, owned a pub in Baja, managed a retail center, and ran a banquet hall in California before coming

to Tennessee a year ago, where most of his family has been living for many years. When he took over the space that formerly housed the Bicyclette restaurant, Ambriz made good use of his construction skills. He built the bar, painted, hung drywall, and even installed many of the booth seats: another unique feature of the establishment.

Ambriz has always enjoyed browsing auction sites online. One day he was surfing around and noticed that the Davidson County general services department had a number of car seats from the backs of Nashville Metro patrol cars for sale. “When they arrest people, sometimes they tear up the seats, so when they get new vehicles, they rip out the back seats and install some sort of fiberglass seats in place of them,” Ambriz says. “So they had all these back seats from Chevy Impalas they were selling. Not too many other people are in the market for that sort of thing, so I got a pretty good deal on them, and now I’m using them for my restaurant seats, with the headrests and all.”

Of course, in addition to the spud-heavy menu, Oh Papas and Beer offers a wide variety of assorted bottle and tap beers, including several from local breweries, like Yazoo. Four wide-screen TV’s carry local college and pro football games, and even some local high school games during the fall. Oh! Papas also has live music between 8 pm and 11 pm on Friday nights. Ambriz says that, unlike most sports bars, he wants to court family business as well as the typical younger sports enthusiasts. “I’ve noticed that, at a lot of sports bars, if you bring in kids with you, they don’t seem like they are that happy about serving you. They want the guys who will sit and drink beer and watch games all day, but here we want people to bring their kids. On Mondays and Tuesday nights, kids who are with an adult can get a kids meal for free.”

Oh! Papas and Beer is located in the Cool View Commons shopping center, across from the entrance to Hickory Hills subdivision at 14801 Lebanon Road in Mt. Juliet. For more information, call 758-3478.