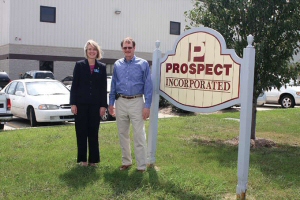 Prospect is Paying it Forward for all of us The term “paying it forward” comes from the simple idea of doing good works for others to repay the good things that have happened to you. Prospect, Inc. is a local non-profit corporation that at its core is paying it forward for the whole  ommunity of Wilson County and twenty other counties across the State of Tennessee.

Prospect is Paying it Forward for all of us The term “paying it forward” comes from the simple idea of doing good works for others to repay the good things that have happened to you. Prospect, Inc. is a local non-profit corporation that at its core is paying it forward for the whole  ommunity of Wilson County and twenty other counties across the State of Tennessee. It began in the late 1960’s when a group of concerned parents started a program for their sons and daughters who had various disabilities. These families believed that people with disabilities  hould be offered opportunities just like all other children so that they could gain independence and become productive citizens in their communities.

The funding for this program ended in 1974. At that time a new program was established that is today, Prospect, Inc. The agency, which has been led by Eric Thompson for several years, is based in Lebanon and provides support services for children and adults who have disabilities. Additionally, Prospect administers three programs where eligibility is not based on a disability. These three programs are Parents As Teachers, the Aging Program, and Families First (welfare to work).

For adul t s who have disabilities, Prospect offers residential services, including personal assistant services, to help those in need of semi independent and independent living. Residents attend the Adult Day Services program and/or participate in outside employment. In the Day Service program, adults are provided developmental and vocational training. Vocational training involves learning job skills primarily through contract work procured from area industry. Their work includes assembly, packaging, shrink-wrapping, and collating, and is performed in Prospect facilities located in Wilson, Smith, and DeKalb Counties. Individuals earn wages while learning valuable job skills with the goal of obtaining outside employment.

Through a contract with the State of Tennessee, Prospect also provides janitorial and maintenance services for approximately 80 state office buildings primarily in the Nashville area, maintains the grounds at the Bi-Centennial Mall, and manages three rest areas on I-24. The
majority of the individuals employed with these projects have a physical and/or intellectual disability.

In addition to these job skill programs, Prospect also offers family support services for families who have a family member, regardless of  age, with a severe disability living at home, The services provided by Prospect include nursing, respite, sitter, specialized equipment, and transportation, and are designed to enable the individual with the disability to remain in the home, with the family, as long as possible.

While assisting adults with special needs is a priority for the agency, Prospect also has made efforts to help children with certain challenges. Prospect Child Development is an early intervention program for children from birth to three years of age who have a diagnosed disability or exhibit a developmental delay. This program is performed in a child’s natural environment, such as their home or daycare.

In addition, Prospect, in partnership with Wilson County Schools, Lebanon Special School District, and UT Extension, recently established a program called “Parents as Teachers.” This is a free, education based program designed to provide information, support, resources and encouragement to parents of children living in Wilson County. This program is available to parents of all children under the age of five years.

And if that were not enough, in 2007 Prospect offered part of its Lebanon facility as a host site for a Wilson County Pre-K classroom. Recently, Prospect has also expanded its services to include the elderly through the newly developed “Aging Program.” This program has been a much needed alternative to institutional care for the aging population in this area. Services for this program include assistance for routine  household chores, personal care, meal preparation, and respite on a short term basis.

Eric Thompson is native of Hartsville, Tennessee and a graduate of the University of Tennessee, Knoxville. After serving as a graduate  assistant football coach at Middle Tennessee State University for two years, Eric left coaching to begin his successful venture that is now Prospect, Inc. Eric continues his leadership role as CEO and President of a 12 million dollar business with over 350 employees (150 of whom work in Wilson County) that provide a valuable service for citizens who are in need of support services. And by his side is Shannon Nehus, Senior Director of Operations. Shannon is a native of Arkansas and currently resides with her family in Lebanon. Shannon received  her under-graduate and graduate degrees from Tennessee Tech in Cookeville and has been with Prospect for 16 years.

As one walks the halls of the 35,000 square foot Prospect facility located on Maddox-Simpson Parkway in Lebanon, it is evident by the friendly environment that Eric and Shannon have taken a hands-on approach with the individuals who work or receive services from the agency. They are proud of what Prospect has accomplished over the years, but more importantly they are proud of the accomplishments of the thousands of children and adults who have taken advantage of the opportunities offered tothem by this agency.

Funding for Prospect is provided in part by Tennessee State government, local governments, United Way, corporate and private donations. Prospect’s mission is to provide support services and employment to people who have disabilities or other barriers to personal independence. Investing in this effort improves quality of life and substantially reduces the tax burden by enabling people to work. It is obvious that prospect is “paying it forward” by helping people who want to help themselves. The additional benefit of Prospect’s dedication is that those who have been helped by Prospect are themselves “paying it forward” by becoming productive members of their local communities. It’s a win-win for everyone involved.