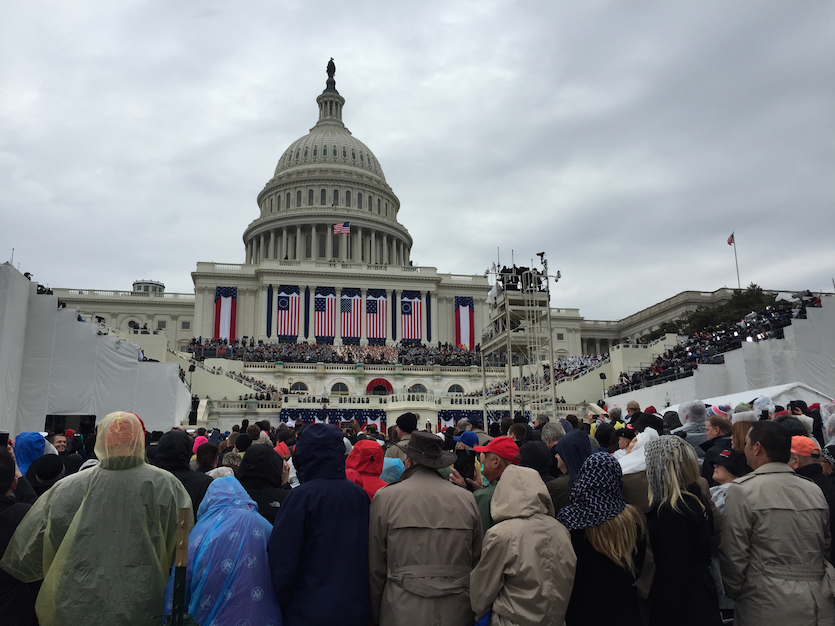 The 2016 presidential election was undoubtedly the most tumultuous of my lifetime, so after receiving tickets to sit on the Capitol grounds with my high school classmate living in Northern Virginia, I booked my flights to Washington.

Stepping onto the DC Metro at Reagan International, I was greeted by typically irritated commuters along with the sights and smells of public transportation in a major city. Though born and raised in the South, my time living in New York City cemented the unspoken rules of mass transit — don’t speak to strangers, keep your head down and most importantly, don’t make eye contact.

I took my standing position in the corner when several large men stepped onto the train in full Texan regalia: three-piece suits, cowboy hats, shined boots and large Donald Trump buttons on their lapels. The typical train atmosphere of silence, screeching brakes and smartphone screens was filled with laughter and southern drawls as the Texans discussed with other supporters from throughout the South and Midwest about the various inauguration balls they were planning to attend.

The presence of these Republican Texans on a crowded Metro train packed with citizens of the District of Columbia, 90 percent of which voted for Hillary Clinton, was a microcosm for the entire inauguration weekend. Supporters of Mr. Trump had won the battle, and they were here to celebrate the victory.

Wandering through the National Mall, it was as if the entirety of the District had left town for the weekend, leaving a void to be filled by Republicans for the first time in nearly a decade. Vendors sold buttons and cheap scarfs, and the sidewalks were swarming with peoples of all kinds, each wearing a bright red hat reading “Make America Great Again.”

At 4:30 a.m. on the morning of the inauguration, my friend and I took the Metro into the city. During inauguration festivities, the DC Metropolitan area essentially closes for business, but the Metro was teeming with energy from Mr. Trump’s supporters from all around the country.

Arriving at our checkpoint at Union Station, we stood in line for the 6 a.m. opening of security, being conducted by the always-joyful Transportation Security Administration. We walked through metal detectors, had dogs sniff us and the officers even made us take our wallets and smartphone cases apart. Finally, we took our seats in the front row of Section 11 at 7:15 am to await President Trump’s Inauguration.

It was a typical January morning in Washington — cold and damp with a drizzling rain. There were no protestors here, just a sense of unity for all of those who had fought to secure Mr. Trump’s place in the White House. Many around us had volunteered hundreds of hours to the campaign in battleground states, so this victory was personal.

Soon enough, the choir began to sing “God Bless America,” and the ceremony began. It was filled with prayer and excitement, though a momentary speech by Democratic Senate Minority Leader Chuck Schumer brought boos and an uproarious chant of “Trump, Trump, Trump.” When Mr. Trump finally took the stage, the aura of unity in the crowd was unlike anything I had ever experienced, as the National Mall exploded in cheer and applause.

His inauguration day will be the only time in his presidency that President Trump will be surrounded by supporters in Washington, DC. By the next morning, many had returned home, and Washington began to erupt in a wildly different tone.

My friend and I knew the Women’s March had been scheduled for the next day, so we decided to take the Metro into the city. With no bright red caps in sight, we instead saw a wave of pink hats and picket signs — hundreds of thousands of angry Americans protesting everything from women’s rights to environmentalism and gun violence. No longer did the people gather to chant for the president, but instead, they began to say “No Trump, No KKK, no Fascist USA!” Pouring down the National Mall and Pennsylvania Avenue from the Capitol to the White House, the protestors were never violent, but undoubtedly angry.

The 2017 presidential election was a turning point for the United States political sphere. The momentum that carried President Obama and the Democratic Party to victory in 2008 and 2012 could not be passed onto Mrs. Clinton, and President Trump stood ready to address the grievances of millions of Americans. Though time will tell of his ultimate success, his inauguration weekend proved his election is the most polarizing in decades.