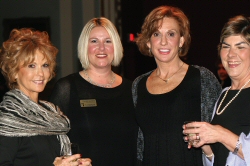 University Fundraiser created to help students keep their eyes on the prize.

It’s that time of year again. The Patrons’ Party and Cumberland University’s Phoenix Ball are two of Wilson County’s most anticipated fundraising events. While it’s a night when guests go all out on wardrobe, the theme of the night is really about giving the gift of a quality education to deserving students. With every dollar raised Cumberland puts students closer to a better job, better future and a better life.

The very first Phoenix Ball was held in 1983. Created by Mrs. Mary Clement, wife of then Cumberland University President, Bob Clement, the Ball was meant to bring more visibility to the campus, raise funds for Cumberland University, and lastly provide an evening of dancing and entertainment for the attendees.

Cumberland University Executive Director of Development & Alumni Relations, Jonathon Hawkins, has been busy this year putting together what he hopes will be the best Phoenix Ball to date. “We’ve been super busy collecting donations for the silent and live auction for the Ball and we just received confirmation on the hosts for The Patrons’ Party which precedes the ball.” Hawkins said with excitement.

Since the economy has hurt fundraisers across the country, Cumberland has been overwhelmed by the support from donors especially this year. “We’ve had some major donations come in for the auction. Some are so big; we can’t reveal what they are until the night of the event. I will tell you some lucky bidders will be going on some amazing trips.”

In addition to the live and silent auction and gourmet meal, guests will also be treated to music and an evening of dancing. Cumberland would love to see you at both the Ball and Patrons’ Party, but you do have the option to attend one or the other.

This year’s Patrons’ Party will be hosted by University Medical Center’s CEO Saad Ehtisham and his wife, Tracy. Ehtisham also serves as a member of the Cumberland University Board of Trust. The Patrons’ Party will be held on June 2 at the Tulip Grove Mansion at The Hermitage. The couple is actively involved in the community and felt there was no better way to give back to the area than through giving back to one of the state’s most well rounded higher learning facilities. Cumberland University cuts no corners when planning their most important fundraiser.

At both the Patrons’ Party and Phoenix Ball guests will be treated to chef prepared food offerings, musical entertainment and spirits. “It’s important for us to put on a great show as a way of saying thank you to those businesses and guests who make a college education possible for students who otherwise wouldn’t be able to receive a degree.” Hawkins added.

The Phoenix Ball will be held on June 4th at Baird Chapel on the campus of Cumberland University beginning at 5:30 with the kickoff of the night’s silent auction items. During the early years of the Ball, funds raised were used for various projects around campus including the purchase of library books, carpeting for Memorial Hall, adding additional furnishings for the then Student Lounge in Memorial Hall, and other things as needed for the campus. More recently, all funds raised from the Phoenix Ball and Patrons’ Party, go directly to Cumberland’s Scholarship Program.

So whether you are new to the area or a lifelong resident, now is the time to support an institution that brings millions of dollars in revenue to our county every year.

For more information on The Patrons’ Party and Phoenix Ball visit www.wilsonlivingmagazine.com under the events calendar. Wilson Living will be giving away two tickets to the Patrons’ Party to our Facebook fans during the month of May. If you’re not a fan, there’s no better time than now to ‘fan us’.

There are several organizations and individuals who go above and beyond when it comes to providing funds that create scholarships for deserving students. Cumberland University President, Harville Eaton along with Cumberland Staff and Faculty hosted a Donor Dinner to honor those efforts. During the dinner students who directly benefited from the generosity of those donors spoke to the audience about how without the money donated a college degree might have been impossible.