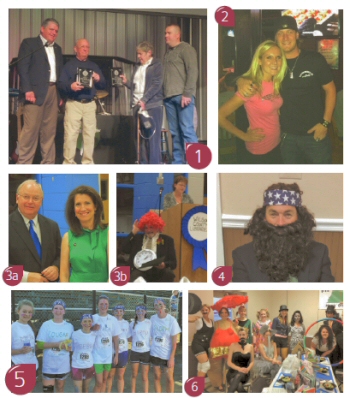 Spring was all about socializing here in Wilson County and I cannot wait to see what fun happenings this summer has in store. We loved catching up with

1. Sheriff Robert Bryan presents service award plaques to Lt. Phillip Tomerlin (Ret.) and Detective Bonnie Wells (Ret.) at Heroes Behind the Badge. 2. Look who ran into Tyler Hubbard of Florida Georgia Line at Jonny’s Trivia Night in Nashville. 3a. Former Senator Bob Rochelle and Rep. Susan Lynn at the Library Roast. 3b. Hale Moss was a good sport as the 2013 Roastee of the Wilson County Public Library Roast. 4. Mayor Hutto as Willie at this year’s Books from Birth Dinner. 5. Seventh graders were ready to run at the 2nd Annual FCS Commander Run. 6. The Moms Club of Mt. Juliet and Lebanon went all out at the always fun Books from Birth.
our readers this season at the 23rd annual Wilson County Public Library Roast – where Wilson County Promotions President, Hale Moss, took comedic punches for a good cause. Many of you were also seen out and about having a great time at this year’s Books From Birth dinner event. And, can you spot anybody famous in our pictures? That’s right, you guessed it, none other than the infamous Mayor of Watertown, Mike Jennings, with another pretty famous guy, Willie from Duck Dynasty.

We also ran into friends at the FCS Commander Run and the Mt. Juliet Senior Center Spring Gala, enjoyed fine dining at The Standard at Smith House, oneof Nashville’s premier restaurants and private clubs, and met Voice of the Tennessee Titans, Mike Keith, at the Habitat for Humanity Luncheon in Lebanon.

And this last month we also paid tribute to our local law enforcement at the Heroes Behind The Badge event. We’re very lucky to have these men and women taking care of us here in Wilson County! Of course, I also need to mention that the always entertaining EMTAR Awards Banquet was held recently and many of our local realtors and title companies celebrated another great year.

Be sure to also check out my new, “younger” friends – this local team is about to rock the world as they have been asked to compete in the World Tech Championship in St. Louis. It’s quite an honor to be one of the 128 teams invited from 2000 worldwide! Look for more about these special, young men in an upcoming issue.