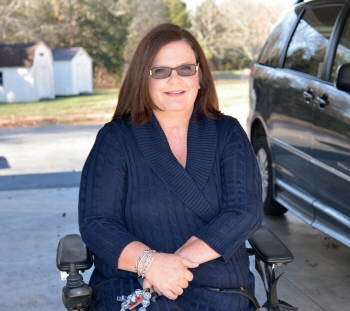 During the summer of 2005 our family activities were in full swing. Having just come back from the beach, our plate was full with school about to start back. The date was July 13th, 2005 and I was doing my usual “mom” things, picking up Austin and Schuyler from VBS at  College Hills Church of Christ, then driving to Wilson Central to pick up Ali from high school orientation.

During the summer of 2005 our family activities were in full swing. Having just come back from the beach, our plate was full with school about to start back. The date was July 13th, 2005 and I was doing my usual “mom” things, picking up Austin and Schuyler from VBS at  College Hills Church of Christ, then driving to Wilson Central to pick up Ali from high school orientation.

Life was just about perfect. My husband and I had recently built our dream home on 50 acres in Lebanon. Other than my church and family, horses were my passion. We spent many weekends with the kids at horse shows and when we were not doing that, we were doing all the things you’re probably doing right now – work, school, church, family, friends, and over again…work, school, church, family, friends, you know the routine.

I loved every minute of my life and couldn’t imagine it could ever be better. After picking up Ali and everyone was loaded in the car, I entered I-40 toward 231 and Walmart. I’d take care of two things at once – lunch and school supplies. No one could agree on where to eat. I remember telling the kids I’d eat anywhere but McDonalds again, two days in a row was enough. That’s the last thing I remember.

They say life changes in an minute. Take it from me, it takes about 8.2 seconds.

Another driver traveling the opposite direction on I-40 fell asleep at the wheel and barreled across the median, striking our car head on. My car was on fire, my legs were pinned, I didn’t know where my children were.

In an instant, earth angels appeared at my window. I screamed for them to get my kids out of the car and then just kept screaming out my children’s names, over and over. Little did I know they were already out – safe from harm.

Because my legs were pinned, no one could get me out and the car was engulfed. My angels found extinguishers in their cars and tried to keep the fire out. Later we would find out the reason the fire would not stop was because the fuel pump malfunctioned and kept feeding the fire.

I was burning alive and they had used the last extinguisher.

Shane Hunt, my angel at my window as I now call him, couldn’t watch me die. He closed his eyes, turned to walk away and looked back at me one more time. Right then… a fire extinguisher salesman drove down the median of the interstate. He opened his truck filled with extinguishers and everyone grabbed one. They did their best to keep the fire off of me until the first responders could get there.

Then the task of removing me from the car began. The jaws of life were brought out to pry open the door, little did anyone know I had actually melted into the coils of the driver seat. I don’t remember much from the Vanderbilt Life Flight but I’m told all I kept doing was repeating my phone number. When family arrived at the hospital, they learned I’d already died four times and my left leg had to be amputated an hour into surgery. Two weeks later I lost my right leg, had two broken arms and 3rd and 4th degree burns over 45% of what was left of my body. There was very little of me below my chest that anyone could recognize. My recovery was an ordeal, I won’t lie. Induced into a coma, I remained in the burn unit for months. Later, after being admitted to Nashville Rehab Hospital,I’d scream with pain during therapy sessions. Sheron Wilee-Ford, one of my occupational therapist remembers that I wouldn’t look up, but simply cried as she held me and gently rocked my 91 pound body. I didn’t have the will to fight.

Two weeks later I went to live at Jackson Park Christian Home where my mother was the Administrator and my grandmother lived. I refused to let them turn the lights on in my room, my perfect life …was burned beyond recognition and was now ash.

During the year that followed, my marriage failed and my relationship with my children obviously became distanced. Every single day I prayed to God to end this devastated life of mine and when he didn’t answer I took matters into my own hands. Heck, that didn’t work either! Right about now, you’re probably thinking why is this lady writing about finding the good life?

But it turns out one of the things I’m best at…is not dying. And if you’re not dying, then all that is left…is living.

Out of the ashes, I rise.
Out of the darkness, I climb.
My pain, changed me forever.
Author unknown

At a certain point along the way, I noticed that my own, now pitiful voice in my head, was slowly being drowned out by the voices of the angels who surrounded me from the moment my car was engulfed. Both the earthly kind and… the other kind. Come on, how many fire extinguisher salesmen do you know?? The voices grew louder and wouldn’t quit. And eventually I came to hear them, loud and clear.

As I sat trapped inside my burning car, Shane stood by my window and said, “Don’t you worry, everything is going to be okay, help is on the way.”

Aboard the Life Flight, my daughter, Ali, heard them say they were losing me. Unable to speak, she signed ‘I love you’ over and over.

When I learned I had no legs, my mother climbed in bed and I listened to her cry as she held me.

When I had pity pouts because I’d never again wear the pretty shoes that had filled my closet, my therapist, Sheron, promised me a red stiletto for my prosthetic leg. Even though I can’t wear it because my skin is so fragile, it looks pretty cool standing in the corner of my bedroom.

When I couldn’t attend Easter Service because all I could wear was a white t-shirt due to the healing burns on my back, my entire church showed up in white t-shirts so I wouldn’t feel underdressed.

Today, I’m back home in Lebanon. My two oldest children are following their dreams and I see them often. My youngest is in school and I’m doing all the “mom” things I used to do…school, church, family and friends. In 2010, I celebrated the five year anniversary of my surviving by traveling to Italy, then Egypt. That same month I jumped out of a plane. After what I had been through, skydiving was a piece of cake.

And from all this, it occurred to me that even though my life is not perfect, it’s a good one, and it was time to do something with it. So, when Angel and Becky asked me to write about how I found the good life, I agreed but asked for some help in return.

‘Help me premier my documentary “One Red Stiletto” and let’s give the money back to our local first responders who saved my life, my children’s lives and so many others everyday.’ This spring we hope to premier “One Red Stiletto” here in Wilson County as a tribute to all the angels who rose from my ashes.

My purpose is twofold. First to inspire those who may be laying in a dark room themselves right now, alone and in pain. Show them that God is good. Let them know you can walk (in my case roll at 6 mph) out of the fire just like I did. Teach them to listen to the voices, because God puts them there for a reason. My other reason is to ask you to be angel, yourself. Send a card or text, offer to hold a hand or say a prayer, prepare a meal or run an errand. Be the voice in someones head when their own voice has lost it’s way.

The premier of the documentary “One Red Stiletto,” Susan Bowman’s story of tragedy and triumph will be held in early Spring. Stay up to date with WLM as we help Susan bring her battle to the big screen as a tribute to many of our local angels – our First Responders.