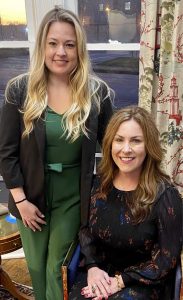 Research shows that the majority of these women incarcerated suffered from major trauma as children – including abuse, homelessness, and abandonment. Left to fend for themselves, often at very young ages, they, for one reason or another, often end up in the criminal justice system. And once in the system, find it almost impossible to get out without family or support to teach them how to change their lives. A fact that did not go unnoticed for Brittany Davis, an Assistant Public Defender with the 15th Judicial District.

The more involved Brittany became with her many clients within the criminal justice system, the more she realized that they needed more than just legal help. She shared her worries with her friend Suanne Bone, a long-time Wilson county resident known for her community involvement, and together these two strong women formulated a plan to offer help.

Our Sisters Keeper, Inc. is a non-profit recently formed by Suanne Bone and Brittany Davis that will advocate for these very women in our own community jails, both during and after their time in the criminal justice system. “Currently, we serve the General Sessions and Criminal Court in Smith county,” notes Brittany, “but we hope to serve the entire 15th Judicial District as resources
become available. That includes women in Wilson, Trousdale, Macon, and Jackson counties as well.

Currently, with Brittany assigned to Smith County courts, she is able to identify women in the justice system who are in the greatest need in Smith county. She connects these women with Suanne, the Executive Director of Our Sisters Keeper, who is the liaison between the women and determining their needs to lead a purposeful life outside of jail. Services include long-term drug and alcohol treatment, rehabilitation, and mentors and other partners committed to the women as they start anew. To help get the non-profit off the ground, Suanne pulled together various members of the community who also wanted to be part of the solution to this growing issue. The current board of directors includes Brittany Davis, Carl Hudson, Stephanie McCaleb, Jack Bare, Jeff Cherry, Shelley Gardner, Angel Kane, Russell Parish, and Cathey Sweeney. In its inaugural year, the non-profit has its work cut out for it but hard work isn’t something this group shies away from.

First on the agenda is finding permanent office space. One office will be the administrative office where the following services are offered: coordination of rehab beds, teaching the women how to reinstate their drivers license, resume building, interview skills, job placement, housing placement, expungement of criminal records, and completing their education. The second office will be a boutique furnished with donated clothing and hygiene products where the women can “shop” and choose pieces for their new life.

“I remember one of the first ladies who participated in our program. I picked her up from the jail and was taking her to a rehab facility where she would be staying for a few months and she literally had almost nothing to take. She had a few personal items in a garbage bag. That was her whole life. As we were just starting the non-profit, I called on friends and family for anything we could pull together to give her, some clothes and a bag of her own to put her belongings in. You would have thought I gave her a million dollars when I gave her a bag of clean clothes and toiletries and her very own pretty bag to carry it all in, “ Suanne notes. “How can we expect to raise someone up like this, when, if and when she does get out of rehab, she doesn’t even have clothes to put on for a job interview. It’s needs like this that we take for granted but make a huge impact on success for many of these women.”

And if we help these women, the end result is not just that these ladies lives will be forever changed but also the generations of women that will follow them.