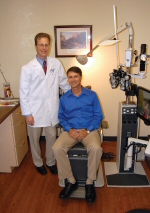 The eyes have it good at Franklin-Altman Family Eye Care in Mt. Juliet where optometrists Jon Franklin and Brad Altman provide optometric care for all ages in a practice with an overwhelmingly friendly atmosphere.

“He introduces me as the older doctor. I’m two weeks older than he is,” joked Franklin, who was born and raised in Lebanon, about the duo who met at the Southern College of Optometry in Memphis in 1990.

“Brad was a good Christian guy out there (on the field and court). Later, we really reconnected when he and I volunteered to help with Special Olympics in Nashville 14 years ago.”

Altman, a native of Searcy, Ark., did a post-graduate fellowship at the VitreoRetinal Foundation in ocular disease in Memphis after graduation and then spent a year-and-a-half working in Lawrenceburg, Tenn. In 1996, he and his wife, Andrea, started a practice from scratch in Sevierville, Tenn.

“Those were some of the best years of my life. It was just me and Andrea and the babies,” Altman reminisced. “I changed their diapers in between patients. I got to spend more time with my kids and wife than most dads and husbands. The building I built for my office had a huge playroom with a kitchen, a shower and was kind of like a home away from home.”

In early 2004, Franklin had an associate depart his practice to take a new job and so he began the search for another optometrist.

“He called me,” recollected Altman, “and said, ‘Hey, I need help. If you know of anybody you would recommend give me a call.’ Just about that same time, I was approached and asked if I wanted to sell my practice. So I called him back and said, ‘Jon, I know somebody.’ He said, ‘Who?’ I said, ‘Me.’” Altman sold his Sevierville practice and joined forces with Franklin in January 2005.

“It was an easy decision,” said Franklin. “In a way it was just like getting married. We talked about being equally yoked, and we were about as equally yoked as well as you could be. We’re not mirror images but are very similar in the way we think and do

“We stagger our schedule. Every other weekend, one of us is off. We basically are together three days a week. It has worked out really well for both of us.” It seems to have been not only a good fit but also a practice with pleased patients and a contented staff.

“Our office is very professional and family-oriented,” explained Nicole Meador, who has worked for 16 years in the practice, which has seven full-time, and three part-time staff members. “Doctors Franklin and Altman are very caring, and it’s almost like working with family. They make everybody very comfortable. They sit in their rooms with their patients, and they talk, and they get familiar with your families and what is going on in their lives,” Meador said. “You don’t feel like you’re sitting there with a doctor but building a good relationship because you’re listening to everything they say.”

Franklin, 43, is a 1985 graduate of Lebanon High School and during his summers he worked cutting tobacco and hauling hay in the Wilson County communities of Centerville and Shop Springs as well as mowing grass at Cedars of Lebanon State Park. And for six summers he was a Little League baseball umpire, when he wasn’t playing the sport. Recruited to pitch by Coach Woody Hunt at Cumberland University, he wound up playing third base, left field and right field. A four-year letterman for the Bulldogs, Franklin was selected the most valuable player on the team his junior year when he led the team in hitting with a .395 batting average as the squad made its first appearance in the NAIA World Series in Lewiston, Idaho, in 1988. He graduated the next year with a Bachelor of Science Degree in Science.

It was during his freshman year at Cumberland that Franklin met Karen Oldham, who grew up on a farm in the Cato community near Hartsville. “She was getting a Biology degree. We had a lot of classes together. We starting dating our sophomore year,” said Franklin. “On our first date she asked me to be her escort for the basketball homecoming, and she was picked homecoming queen.

“Karen was contemplating getting a PhD at Vanderbilt, but she decided to go to pharmacy school, and so she started school in Memphis a year after I entered optometry school. We got married Aug. 3, 1990. Love and loans is what we got by on,” he said.

Karen served as a clinical pharmacist at the V.A. Hospital in Nashville for five years and also taught pharmacology nine years at Cumberland's Jeanette C. Rudy Nursing School. Today, she home schools their children, Erin, 14, who enjoys soccer, and Andrew, 12, who plays baseball. Both are also active in 4-H. The kids have recently found a new place to get down to earth.

“We bought my mother’s family’s farm in Grant. It has been in the family since 1886 and is a century farm. I’m trying to learn how to do a little farming; cutting hay and putting up fences and restoring house,” said Franklin, who knew as a teen what vocation he planned to pursue.

“When I was 14 I had to get glasses for the first time. Dr. Ross Averitt was my eye doctor. He was always at the ball field. I thought, ‘Dr. Averitt looks like he makes a nice living, and he’s at the ballpark all the time. That’s for me.’ I wanted to coach Little League baseball and enjoy my job. Dr. Averitt, Dr. Thomas Gallaher, Dr. Mike Hassell and Dr. Tom Roberson were my mentors,” said Franklin, who began working for Dr. Roberson at his Mt. Juliet eye clinic in the fall of 1993. Later, he bought the business and opened his own clinic in June 1994.

Over the past 17 years, he has seen patients in their 90’s all the way down to babies just a few weeks old. “The best part of the job for me is meeting and getting to know people from all walks of life and being able to give glasses to individuals who can't afford them,” said Franklin. “The hardest part of my job is having to tell someone that I have a developed this type of relationship with that he or she has a serious, progressive eye condition.”

As for his partner, Altman said, “The best part is the obvious thing: just opening eyes and making people’s vision better. The first time a child is able to see and didn’t realize they were supposed to see that way, they say things like, ‘You mean you’re supposed to see those airplanes in the sky? I’ve always heard them but didn’t know you could see them.’”

Altman, like Franklin, is 43 and has always enjoyed athletics. His high school, Harding Academy, won the State championship his sophomore year, and during his three years, two of them as starting quarterback, the team’s record was 32 wins and four losses.

As a youngster in central Arkansas, Altman was a paperboy from the fifth grade until he entered high school. “I delivered papers along my route on my bicycle every day after school and every Sunday morning before church. I did that until my freshman year when I started working summers at Ace Hardware, up through college. I also mowed yards and umpired Little League games,” said Altman, who graduated from Harding University in 1990 with a degree in Biology and Chemistry.

He met Andrea in psychology class at Harding, and they began dating his senior year. For their first date he invited her to a pajamathemed Christmas party. They married June 1, 1991.

Andrea, who earned a degree in Psychology, helped put Brad through optometry school by working for an optometrist in Memphis and later worked for an ear, nose and throat group. She also assisted him with his practice in Sevierville but now spends most of her time “just being a mama”.

As for Brad, he knew his freshman year in college that he wanted to be an optometrist. “I got to investigating the professions. I didn’t want something that tied me down all seven days of the week, and optometry lets you work your own schedule, and I could have family time, which is what I wanted, more time with my family,” recalled Altman.

He and Andrea have four children: Nick, 16, and Nathan, 15, who attend Wilson Central High School; and Anna, 12, and Andrew, 8, who attend Southside Elementary.

As for hobbies, Altman said, “My children: any of their activities and sports. Coaching them. I help Andrew with baseball, and the other kids are old enough that I graduated from coaching them, but mainly fishing and hunting with my kids, their athletics and being with my family.”

Altman has supervised the Opening Eyes program at the Special Olympics on the Vanderbilt campus since 2001. “They hold their summer games the third weekend of May, and we’re out there in a big tent. We screen the athletes and provide, free of charge, sports goggles and sunglasses as well as regular eyewear,” said Altman, who, during his post-graduate training at the VitreoRetinal Foundation, got a closer look at glaucoma, corneal diseases and retinal disease.

As for what’s new in eye care, Altman stated, “There are some new treatments in dry-eye syndrome for ocular surface disorders that we are starting to do.” Franklin noted, “One thing getting ready to come out soon is eyeglasses that have got an LCD screen built into the bottom of them. You have to charge them up. I know that sounds very Star Trekkish, but for folks who need bifocals, there is an electronic screen in these glasses. As your head looks down, the screen pops up and the reading part is built into that screen. It should be coming in the next few months.” As for the daily routine in the office, Franklin-Altman Family Eye Care provides general eye evaluations for contacts and glasses and medical eye care, as well as cataract and LASIK correction management. The clinic also treats injuries to eye, evaluates children under the age of three and provides comprehensive imaging for the treatment of glaucoma and retinal disease.

“We both dabble in sports vision, and I guess if I had my choice, I would see athletes all day long, as I enjoy that particular venue and played a lot of sports,” said Franklin, who has a pretty sizable collection of baseball memorabilia in his examination room. “So I have a good idea of how to manage athletes with contacts or glasses. “However, I truly enjoy not only evaluating all my patients' eye health issues but also learning about their lives, families and interests.

I have many patients who I started seeing as a child, and now they are all grown up and have children of their own, and they bring their spouses and children in to see me. I love having that continuity in our relationship. I enjoy getting to know each patient as an individual with his or her own interesting story.”

Whether their clients are average families or college and high school athletes or not, Franklin and Altman prove a friendly and winning team and always have their game on.