When Dr. Bill Schenk was in college his two best friends were blind. One from a congenital disease and the other from an accident.

Looking back now after 39 years as an ophthalmologist, Schenk reflects and said these two friends, plus a job that got him through college related to helping the blind, were the impetus to choosing a path in this field.

Schenk is an ophthalmology specialist in Lebanon and after nearly four decades in practice, retired July 1 of this year. “It’s been great and I have no regrets on my decision to retire,” he said.

He lives just three blocks from Vanderbilt Eye Institute where he leaves in “good hands” a practice he’s built for so many years. His long-time practice, Lebanon Eye Associates, merged with Vanderbilt in 2011, he said.

Schenk is married to Linda, who works with the Wilson County teen court. They have three grown children; Lindsey, 37, Allie, 35 and Collin 31.

Schenk was born in Houston, Texas, and lived there until age 10. He then moved to Kansas for four years and went to high school, college, and medical school in Nebraska. He graduated with honors from the University College of Medicine in 1981.

“When I was in college I worked fulltime and went to night school,” he explained.
His job was at The Library for the Blind, which services the visually impaired.
“One half of them were blind,” Schenk said.

He said during this part of his life journey two of his closest friends were blind.
It was at this time he formulated his career path. “I became empathetic from knowing them and their perspectives,” he recalled. “It was from then on I wanted to improve sight and restore the blind.”

He was in his early 20s when he had this life-altering revelation. Part of his job was going to the University of Nebraska (right next door) where he recorded volunteer readers so those without sight could enjoy books.

“At first it was reel to reel,” he said thinking back. Then it went to cassettes, CDs, and now volunteer reading and audiobooks are online.

One of his best friends was born blind and the other was 16 and in an auto accident with four others where he thought the car was going to plunge down an embankment from an overcorrection. He jumped out before the car was corrected and it was he who made the fall, hit his head and lost his sight.

One of the friends was an athlete and Schenk remembers they worked out together and jogged in tandem through the park, connected and directing with a bandana.

Schenk and Linda met during a snowstorm. “We were at a racquetball court and my friend couldn’t show up and Bill and I started talking,” Linda said. “He asked me out on a date.”

The romantic first connection during a snowstorm solidified to years of marriage.

Schenk’s first practice was his own on Park Ave. in 1985, in Lebanon.
“I had two employees, someone who worked in classifieds and saw my want ad, and, my brother who we trained,” he said. 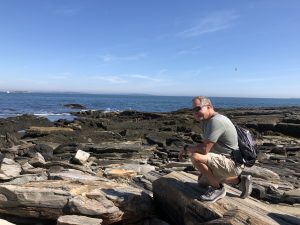 After three years they were so busy he got a partner and moved to his second location, also in Lebanon, at 1616 West Main. He eventually worked with several other ophthalmologists, and optometrists, and was the first practice in Tennessee that offered both optometry services and ophthalmology services.

In 1998 Schenk built Lebanon Eye Associates and by 2005 had 10 eye doctors and 70 employees. He merged with Vanderbilt Eye Institute in 2011 and the rest is history. “I enjoyed working with Vanderbilt for nine years,” he
said.

Additionally, this practical entrepreneur doctor continues ownership of the building he built that also has Wilson County Eye Surgery Center he implemented. This continued ownership will augment retirement funds, he noted.

Schenk turned 67 in September and said he decided to retire about a year ago. He held off retirement long enough to feel confident he would leave highly trained providers in his absence. Dr. Jessica Mather is essential in this sense of ease and in July he felt it was time to “pass the torch.”

Their long-desired plans for retirement (Linda still works with Christmas For All and Wilson County teen court) was to find a place to retreat for their beloved sports of windsurfing, kiteboarding, scuba diving, and snorkeling. It’s in the Caribbean, and part of the Netherlands called Bonaire Island.

“We visited there some times and it’s the best place to windsurf with consistent high winds,” Schenk noted. However, the COVID-19 pandemic put a pause on these plans because of mandates.

So now, the couple bike, kayak, and paddleboard. Schenk works out two to three hours a day. He said he got his love of water activities as a child because his father ran a YMCA camp and he spent his summers there, and also in
California enjoying the ocean. This couple said they will continue their
travels and plan to soon white water raft in Maryland because it’s safe to drive there.

Through his long practice, Schenk estimates he’s conducted about 25,000
cataract and glaucoma surgeries, and about 10,000 laser surgeries. He’s treated tens of thousands of patients. When he first started, it took about an hour and a half to conduct cataract surgery and today it’s about 10 minutes.

And while those many surgeries and helping those with sight problems have
come full circle from his decision to carve a successful career dealing with the eyes, he said it’s been a fun path to travel and now he can slow down a bit and pursue a new kind of fun – enjoying his family and nature. The couple has already conquered places like remote islands, Prince Edward Island, Canada, and Seattle, among so many other places. No doubt, they have made a long
list of upcoming explorations during retirement.